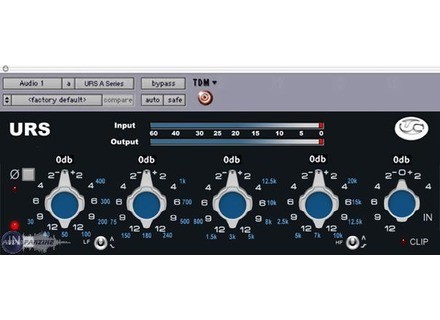 All user reviews for the URS A series

URS A series
5
The URS A Series EQ was quick to install and is overall easy to get started. I had no compatibility issues with this plug-in, and I have come to trust URS made plug-ins in all aspects of their performance. It has run stable with my machine since I installed it and has always run smoothly. I don't have a manual for this, so I don't know how helpful it is when learning this plug-in.

I am running the URS A Series EQ on a Mac Book Pro that has a 2.2 Ghz Intel Core 2 Duo processor and 4 GB of RAM. I run this plug-in in Pro Tools LE 7.4 with a Digi 002R audio interface. I haven't had any problems with this, or any other URS plug-in, even while running a few of these at once. The interface is easy to follow and learning the plug-in won't take too much time. The URS A Series plug-in won't take up too much of your processing power overall, and is possible to run a lot of these at once.

I've been using the URS A Series EQ for about two years and have found it to be a really useful EQ plug-in. I believe it is modeled after an API EQ, and has the overall look and sound of these vintage models. The sound quality is crisp and there is a great deal of versatility in terms of setting your EQ and notching exact frequencies. The price is reasonable, as all URS plug-ins are. URS makes some of the best plug-ins out there and this is a great example of their craftsmanship. While I usually prefer having a graph to go along with a parametric EQ, this is easy enough to follow that you don't really need it. Overall, this is another great plug-in from a great plug-in manufacturer.
Did you find this review helpful?yesno
Cookies help us improve performance, enhance user experience and deliver our services. By using our services, you agree to our use of cookies. Find out more.