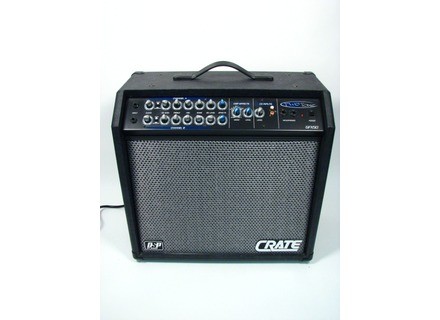 All user reviews for the Crate GFX-50 TT

Crate GFX-50 TT
5
This is a nice guitar amp that was a gift but I think it was bought at around $350 with a 5 year warranty at Victor's House of Music in Paramus, NJ. I was told to share this amp with my brother on keyboard. It works with most low powered keyboards- nothing that will be too loud and blow the speaker. So he uses a Yamaha (but he can't seem to grasp that the keyboard is louder without the amp.


I like how this amp is 2 channels. It was originally designed for guitar teachers to plug in and their students to plug in. Well let me tell you, this is not the small Peavey that me and my guitar teacher plug into. When I say two channels, I mean two people can plug into the input jacks and there are seperate controls for each. This in theory I guess, is like two seperate amplifiers. This is a great performance amp-and then some. It is simply because the 50 watt giant can acccomodate two seperate guitars or a guitar and a low powered keyboard for that matter. It is great for anything from a practice amp to a performance amp. Mostly, I like the fact that it doesn't weigh a ton; it balances in at a light 28 lbs.

At this point there's nothing that I don't like. 50 Watt sold state. Dual playability. 28 lbs. A built in preamp. What is there not to like? If something did happen to this amp- I would buy another Crate amp, if not this model over any other. And besides, it's a Crate. That name's reputation just explains itself.

The quality overall seems good. It is a flawless wonder. The "two in one" feature is an easy alternative to two amps. I recommend getting it unless you don't play with anyone- don&#8217;t jam or perform or anything- of course it&#8217;s still a 50 watt solid state amp with lots of effects and huge distortion. Otherwise- it&#8217;s better than lugging around 2 different amps.

Where I bought it, it was brand new and had come in 5 days before. I was amazed to discover that this was the last one in stock. If it can sell out in 5 days, think of what other people thought about it. Like me, other people probably researched it and found how great it was and rushed to buy it. If you can find it, I highly recommend it. In the places I've seen it, mostly it has been under $400. The price may seem a little high for a 50-watt solid state amp- but think of it divided by two (for the dual function) and it doesn't seem so unrealistic.