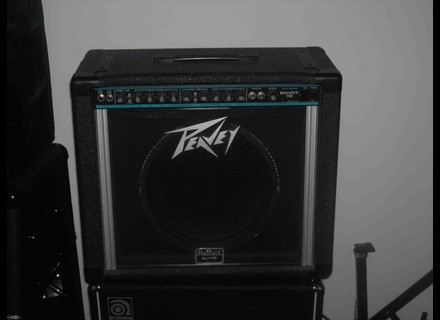 All user reviews for the Peavey Bandit 112 (Sheffield Speaker)

Average Score:4.2( 4.2/5 based on 7 reviews )
Value For Money : Excellent
Not satisfied with those reviews?
Our members also liked:

heads on fire's review"It works for budgets and kids."

This is a decent amp on a budget. It's loud enough to be heard in most band settings, and sounds ok. It is easy to dial in a working tone, and being a Peavey, it doesn't take a rocket surgery degree to make that happen. Peavey is known for making durable, affordable, and easy to use products, and this doesn't fail in those regards.

The sounds one can dial into this amp are decent. I sure was inspired as a kid, but I've owned and played much better, so now this amp is just alright to me. It's enough to be amplified in the same room as other instruments playing, and it has the ability to tailor one's sound with EQ, gain, and reverb, so it works in that regard. The best part about the sound of this amp is definitely the quality of the speaker - cleans are actually not bad. The dirty channel could use some work - more picky players will probably want to use an external dirt box.

The rating I'll give this is average. I've played enough amps now to know that there are way better products out there, but there are also way worse. One couldn't go wrong buying one of these for under $200, as long as one isn't the most discriminating tone ranger around. It doesn't sound amazing, but it is a workhorse, so it is a great product for anyone on a tight budget, or for a kid just starting to be in a band. The amp does the job, and is very durable, so it gets a 5 overall from me.
Did you find this review helpful?yesno

Peavey Bandit 112 (Sheffield Speaker)
3
Peavey what a great company. They still continue to put out impressive products as competitive prices. This is another amp that caters to the masses with its low price and functinalty.

This amp is the basically with the Sheffield speakers. I believe some of them came with Blue Marvel speakers and this one simply came with the Sheffs. These are a British based voicing speakers which sounds more like a Celestion. A very popular speaker for many people.

This amp is called the transtube technology amp which basically means that it is still a solid state amp design but with an emulated tube tone. So basically what you get is an amp that is cheaper to produce and sell and still be able to sound a little bit better than a regular solid state amp. I have to say that it sound sound much fuller than a standard solid state amp.

The tone will sound a tad more towards the British side since it has these Sheffield speakers installed.You can definitely tell in the sound and tone that this amp is still a solid state amp. You just can't emulate a tube tone and have the same feel and punch that a real tube does naturally.

However, this amp does take digital processing a step further in the right direction.
Any guitar sounds great with this amp. I like a nice Gibson Les Paul or another guitar with a humbucker pickup in it. Peavey amps I feel take humbuckers really well and smooths out some of that harsh high end that is naturally attributed to their tone. It sounds great with a Fender Stratocaster as well.

I would recommend this amp to anyone who needs a good amp for practice or jamming use. These particular model has been upgraded so you would have to score one of these on the used market. You can probably find one for just a little over $100 used. They do have a newer model which runs around the price of $370. Still not a bad price for a decent practice amp with some good tone.
Did you find this review helpful?yesno

Although comprehensive and super reliable, the clean channel possde a switch "bright" for a more slamming. The saturated channel possde supplmentaires the first two switches called "trash" for a more comprss and the second "gain" that brings more power.

This amp possde clear sound rather nice the problem is that the equal is not really trsractive.
The channel is saturated East "metal" with a fairly flat and distortion comprss.
Not really my type, the potential crunch by measuring the pre-gain is not dgueu.

The reverb is cool and allows be dose gradually, which is not always the case according to the amps, so the good point above.
The lamp simulation bofbof ... a blast!

Together rather OGLA, perfect for budding musicos will play hard with his mates without breaking the bank.
The amp is solid and reliable, I gard more than 10 years without PPIN, just a little bomb contact for maintenance.
Did you find this review helpful?yesno

elchookas's review (This content has been automatically translated from French)

At the rear there is a socket for the footswitch and a loop effetcs parallel.
Before there is 1 input and 1 hight low input; there is also a series effects loop.

The clean channel has 5 knobs: volume, bass, mid, high and presence. There is a button bright as to have more shine.
The overdrive channel also has 5 knobs: gain and volume, and low, medium and aigue.On is a gain knob for more saturation and a shift button that modifies the response of mediums.

A Yes, there is a general knob reverb!

it is complete and it is significant !!!!!

lack of adjustment per channel and reverb knob to adjust the level of effects loops.

It's very simple and it works, turn the knobs on the basis of musical styles performed and there was a sound more than convincing!!

Amp is very versatile as it is me the qualities (or defects) played the guitar!

Ben goes on www.myspace.com / elchookas vera and you that I practice a style where there is need for clarification and distortion. I plug my LTD MH-400 in (with or without bristling with pedals) and the sound is always excellent!
For clarity, I mest all knob center and is perfect for a clean full of emotion and relief.
The saturated that plays everything thoroughly with toutefoie mediums to 5 and the shift enclenché.Si one is masochistic, we gain little trigger button as well.
I like this type of control and I find her quite warm for the transistor ...

I've had a little less than 1 year and I am very satisfied.
It may be a lack of adjustment per channel reverb and level adjustments for the effects loop but I do not use it .. and then I found him nothing was wrong!

I had a lot of amp (marshall, fender, peavey ...) and I have a tube amp that surpasses lllllllllllargement but I do not part with because I like the sound that comes out.

A 200 € I think I've got a good deal because my friend has had to use it ps a lot because he has a demanding work at the time.
If I had the choice again I would resume their eyes closed!

For metal it sounds serious! The best of this amp has prix.meilleur any competition,,, A; sounds hot enough, more than the metal pedals, masi missing chorus noise gate delay for something really qq perfect clean sounds transparent, and after must a multi effects to improve;

J el used for 15 years, it does not break. I deal for the studios to repeat, not too heavy, should just make the connection with head hp; = light in nickel would be cool, good value q / p but still too expensive for qq1 without tunes, and finally whether to buy qq totu thing for play, including one of the metal c; If I have a lot of tunes I buy a tube amp but I bought one the

J el used for 15 years; is not case sensitive. I deal for studios repeated, not too heavy; should just make the head with hp connection; en = lightweight it would be cool nickel; good ratio q / p but still too expensive for qq free tunes, and finally whether to buy sth totu to play, including the metal that the c; If I have plenty of tunes I redeemed a tube amp but I redeemed the the
Did you find this review helpful?yesno

NfDG's review (This content has been automatically translated from French)

here must be over 15 years that I have mine. I bought it after having sold a Marshall Valvestate 100, the sound did not suit me (too typed marshall).
his palette is very wide, from blues to metal to jazz and others. like any good amp, just poking a little on the set (complete what it takes) to find the sound that one seeks. versatility is well established, the number of "updates" and the number of rehearsal rooms where it is found speak for themselves! While it's still a transistor amp relatively cheap, but what amp!

Having played different styles of music, the quieter the more brutal, I can assure you that this amp has adapted each time.
I have connected strats, Les Paul, rows, achtops, folk, classical and more. pani problem.
playing with the settings of the amp and guitars, we find the desired sound. clean, slamming, crunch, drive, sat and sat extreme, everything is possible!

After 15 years, a number of trips associated with the musician and repeated shocks over time, even when it starts to get out of breath; boosted channel emits more than a big clean and feedback is noisy. But it's only a few months he kidding, he held out until then!
I particularly like the heat that can be drawn, more than just Marshall Valvestate 100 or Hughes & Ketner Attax 80 (amps that came out at the same time on the same pricing game).
he never fails, and value for money is an exemplary product of this age.
so do it again, I would resume this amp again in a heartbeat (returning in the past, of course).
Of course, it is a transistor amp relatively cheap, so those seeking a true type or the lamp will go their way.
very very good amp! still marketed today .. further proof of reliability!