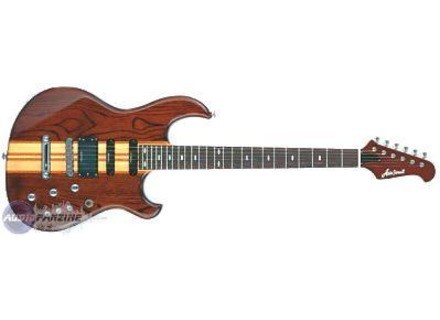 Flattish neck, big frets, flat radius fingerboard makes playing quickly easy although harder on the hand than a fuller neck. Heavy but not terrible (maybe 9 pounds). The LPF instead of a tone control definitely takes some getting used to. Tone can vary from strat or even tele bright to smooth jazz dark. Fairly high output system (18 volts, two batteries).

Some folks call the pickups sterile, I think I could live with them although they cause many overdrive devices to sound a big "fizzy". Definitely a bit more finicky to get a target sound, but if really wide varieties of clean, LOUD tone are your thing (Gerry Garcia anyone) this could be your axe!

For some incomprehensible reason, in the early 80s, Alembic sent pickups and perhaps electronics to Aria Pro to build their Alembic copy RS850 (the 750 had passive electronics, the 850 had 18v electronics). The specs are identical to the Alembics of the time: two single coils with a dummy coil for hum bucking, neckthru design, 6 on a side tuners, 18v electronics with proper low pass filters with 3 positions for each and hardware that seemed to be a copy of the Alembic stuff. Not sure why they decided to help Matsumoku out, but there it is.

The main difference between the guitars was that the Aria had the wings for the neck thru design made of solid walnut or other wood, whereas Alembic had the wings veneered top and bottom with highly figured woods for a more deluxe appearance. The inlays were very similar. The Rev Sound had a painted on logo vs the Alembic metal badge.

I just got an RS850 in really nice shape and I'm definitely enjoying it. I"m waiting on an Alembic for a straight AB comparison, but from my 10 year old memories it sounds the same. Very cool tones from straty*jangle to smooth jazz with stops for hard rock in between. Some have complained that the Alembic pickups sound sterile and cold, but I think I could live with them. The only problem is learning how the 3 position low pass filters sound in various combinations and positions. BTW, the thing KILLS with distortion. Doesn't seem to matter what pedal but either the Klon or the Honeybeest into the CAL Holy Fire is a wonderful sound, with moving the LPFs giving almost a wah feeling to the whole thing. Worth finding (the RS850s seem to sell in the $1200-1500 range vs the Alembic $2k to $10k depending on how deluxe and how old).
__________________
Did you find this review helpful?yesno
»

Minimok's review (This content has been automatically translated from French)

Aria Pro II RS-850
5
This is a 1980 model, different from the picture, because with 3 microphones single 9v battery powered active.
For me, this guitar was made in Japan, but I could be wrong. It is not very serious because it is a beautiful guitar, very well finished. In the guitars, we find those that are walking around everywhere, that abyss a bit, the guitar road. This one is quite the opposite. Delicate in appearance, it has no desire to keep at home, the pampered, without saying it is not solid, quite the contrary. In short, a nice little gem to watch.
The active pickups coupled with the impressive number of selectors and tone pots can get a variety of impressive sound. The older type mechanical Gibson a little sore at the paint like bronze, silver becomes over time.
As with any guitar that has active pickups, careful not to let the jack in the guitar if you do not use it. High consumption of batteries. I feel that this was the first generation of micro active
The neck is glued to the body whose only fault is his tendency to twist with age and becomes irreparable. Mine is slightly twisted, but alters the capacity of the original guitar.

The neck is a joy. Very fast access to the last frets very easy. It is very fine and could be likened to a Fender neck, perhaps with more finesse.
Body shape, Fender-type is very nice and very light. For my part I only play seated, and could not talk about his weight after four hours of use up.
The good sound is difficult to obtain because the palette is more than wide: 4 switches and 2 pots for mine. Contrary to previous opinion, this is for me an excellent guitar for clean sounds, and bad enough for saturation or distortion.

This is my first guitar and I use it rarely now, just to get her a highly crystalline (Chorus, Compressor and Delay). As I said above, it is more of a jewel, and I can not part with it (y 'links that are created over time!). Even if the settings are many, this guitar lacks a bit of character. Guitar originally dedicated to the jazz guitarist it turns out perfect with a Jazz Chorus amp from Roland, in the same time (tried it once with a friend). For my part, I used a Marshall 50W transistor, and the sound was not too bad either, but not really suitable. I turned to a solution for amp simulation (Guitar Rig) coupled with Cubase, and there it is possible to obtain sounds really good, especially in the clear.

This guitar was the same as that of my teacher ... guitar. Purchased 1982, used this guitar in my youth! At the age when one goes up his first group, it was a bit out of step with what was really trendy (Gibson LP or SG to the Hard Rock), but it allowed me to lead closer to a 70's hippie style!
Now I use mainly a US Standard Stratocaster, which for me has more character, but remains in the category of guitars "fine"
The quality / price ratio, at the time was excellent. The fashion was (and still is) on guitars USD. A finish worthy of a Gibson LP Gold F to 4500 in 1980 (I had bought two years after 1500 F).
I do not have that choice would do today because tastes change, but I am very glad

gracchus's review (This content has been automatically translated from French)

Aria Pro II RS-850
4
This series was made in Japan between 1978 and 1982. She interposed between the RS600 (same violin, but passive electronics) and RS1000Z (even active electronics, but mahogany body). The RS 850 has existed in two versions, one with head Fender (mechanical line, as shown in photo), the other with head 2x3 (like mine). I do not know which of the two series is the oldest. The neck is not glued or screwed: driver and it is through the body. Rosewood. Channel thinner than a Fender type C and a bit wider, very enjoyable to play. The active electronics are powered by battery (s) 9V (some versions, like mine, requires 2 batteries). Fixed bridge type Wilkinson. Many communties for micro and prééqualisation. Beautiful violin (at the time of its release, the guitar, Aria premium, sold at the price of a new SG). A subsequent series (1983-1985), made in Korea, will keep the same name but RS has neither the aesthetic, or the same quality of stringed instruments.

This guitar is in excellent clean sounds, slightly crunchy see (see above). It is the wealth of his (her) stamp (s) that makes it difficult to use distorted sounds, for which it is difficult to get out of a side draft and its impossible to get a "creamy".
In clean sounds, it is very versatile and unique.

Bought second hand for cheap (€ 300) given the quality of the instrument. It complements my set (Start and PRS Custom american standart). I recommend however to metalheads and relentless saturation, except cherher a particular sound.
Did you find this review helpful?yesno
»

darock's review (This content has been automatically translated from French)

The handle is 24 boxes, driver, key bne. There are two simple active pickups (which is super rare), plus a troisime the center, which serves to capture a signal in phase inversion to eliminate parasites in the microphones.

Lutherie of the highest order. The technique of 5-ply neck-RALIS perfectly (which is hard to TRS), the woods are excellent, and uitare exudes good quality workmanship. See anything withthe Japanese instruments of this era. Manufacturing Start a trs ahead US (quality of wood, electronics, finishing, ...), for a similar price the era.

There are two 3 position switches that boost the tonality of each of the microphones.

Absolute ease of playing. Access in acute is not good, it carrment perfection.
Easy to play: you make a note, it s'arrte more. Endless sustain.

In addition, it is even better "Moulle" coprs in a stratum, and super lgre. Held in absolute comfort.

I can understand the view Previous on certain points. It has a sound type so that it is far short of all the outs and all styles of music.

Sound clear: Crystaline, and hyper-rich: trs near the sound of a guitar electro-acoustic in some cases. The sound of the scale, deep bass and solids, and acute mdiums Submitted pure. Super hot (which is rare on a system active. Its super rich but typ.

Distorted sounds: did for the Metal as simple microphones, and more so as the level of the guitar is super sound lev was too saturated limit between the ds. Rultat, there's a soft and a bit messy. Nothing pchu what. So even the hyper typ. on the other hand, it IDAL for alternative rock, grunge or the noisy Sonic Youth.
Nickel also for solos (especially with the sustain and Access in acute). Crunch trs hot and vintage, superb.

I put 8 because in absolute terms, the sound is trs good, but do not agree all. So much personality that he is not versatile.

I've had a little more than a decade. The neck has never needed to be rgl despite the person who had before and that n'tait not careful. This guitar has collected many blows without flinching. Frabrication trs robust and treats.

In the beginners of the 80, it Coutat Fr 5000, as a strat USD. Today, it sells for 200 euros. So it's an incredible deal, if his personality does not drang. The best thing to have in plsu another guitar more versatile.

But in any case a good instrument trs, well ahead of many instruments amricains.

Did you find this review helpful?yesno
»
Read the 6 user reviews on the Aria Pro II RS-850 »