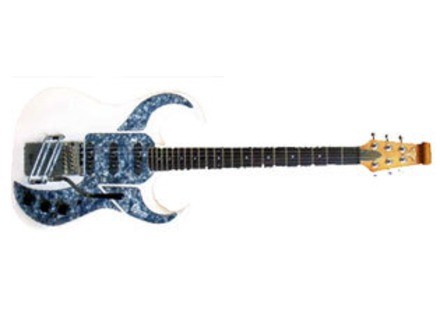 ashahabpour's review (This content has been automatically translated from French)"Very, very good guitar!"

Burns Guitars Bison 64
5
- Made in China (it starts badly, but I do not have much bad to say then) and controlled England.

- Finish improved. Pleasing to the eye but there is one or two small flaws in my opinion. But we are well above the finish of a Fender Mexican anyway.

- Bridge Fender guy, I do not have the Ground O-Tube and it&#39;s good, I do not serve Him and I prefer the mouth of the guitar as well.

- 22 frets, 3 single coil pickups Rez-O-Matik. They are very good qualities. Regarding configurations I do not know exactly what are the settings that allow you to use microphones but what I&#39;m talking about this in more depth in the game!

=> I put new because it comes from China and all the kinks. I&#39;ll compare it to a Fender Stratocaster Mexico throughout the trials. I would put 7 on Mexico in this category (not really finish top, plastic poor quality, the 22nd fret serves me well!)

- The handle: it is special, you must love. I want to compare it to a mix of Gibson and Ibanez: flat but wide, especially when approaching the body of the guitar. Access to the treble is very good. Personally I love it, I felt very at ease immediately, and it is not at all tiring!

- Ergonomics fishing a little, the guitar is quite large, and it stings a little nose (not as a SG, but feels she wants to leave). WARNING: I tried standing with a bad strap, it should be arranged with a strap better. Otherwise it is very nice, the knobs are very far from the strings which suits me well (we do not stumble over), the right hand finds herself a place on the bridge!

=> I put 9 for the (small) problems of balance. Here I have put 8 to Fender Mexico because I&#39;m not a fan of C and handle knobs bothered me from time to time when I was playing.

I&#39;m a fan of Clapton and Knopfler, but I also love a good classic rock the way Led Zep, Guns & Roses, Metal and "soft" like Black Sabbath. And this is where the test becomes even more interesting.

Before continuing I specify that I play on a Blackstar HT5. I do not use effect for the test, and I allow myself to connect a Metal Muff over the end of the test.

EMPTY: The sound is already very nice, lots of sustain, and it sounds hard, it promises ...

In CLEAN on my amp: This is a treat. In fact I traded my Fender against Mexico because I was fed grain Fender. We are here in the presence of his less slamming, more serious, and in my opinion more pleasing to the ear. It is of course possible after tweaks regain its much closer to slamming (closely it must be said) that typical Fender sound, but it is not my goal. It&#39;s nice to play Clapton but apart from that it does not interest me! The sustain is really good too.

In CRUNCH: This is where it gets really interesting. The pickups seem much more powerful than the simple "classical". With the tone knobs and knob, it is possible (and this is also true for the CLEAN) have a multitude of different sounds. This guitar is really nice to the crunch, the more fat than a Fender sound and I love it.

In OVERDRIVE: Interesting too. It is clear that these are just simple microphone but frankly they do the job well. Not as much as double, yes, but simple it really is nice. The sound that comes out of the guitar is more accurate than the Fender, and that&#39;s really a godsend for someone like me who also likes to push off a little from time to time and not enough money to pay for two guitars of good quality. By putting the switch completely down, we really will sound good in overdrive.

In DISTO (with the Metal Muff): Well there should not ask him too either ... This is not what is asked even if again, she surprised me. It is entirely conceivable to do is play a little Black Sabbath, totally down position the microphones are accurate enough for this kind of distortion. Again, it would undoubtedly be better to have dual microphones but hey, this guitar is doing really, really well.

I am tempted to put 10, but do not forget that no guitar is not perfect in all styles, so I put him nine. I would have put seven Fender for its lack of fishing Overdrive and the fact that it is unplayable Distortion.

I&#39;ve had one day (I played it all day, so I managed to do a little tour of the sounds can even though I still have much to learn on), and I think I éditerais s it changes.

I tried many model (the Fender Mexico to Ibanez MTM1 through the Epiphone LP). My choice was finally settled on G & L Legacy Tribute HSS, and then I had this Burns hands ... Although it lacked a Humbucker above to fill my specifications, I decided to try and I&#39;ve realized what was perfect for what I wanted to do: lots of clean / crunch, and a little overdrive / distortion, for fun.

Bought for 350 euros in time, the value for money is excellent.

I have not enough experience with this guitar to say it, but what is certain is that I am delighted to now. And that&#39;s saying something.