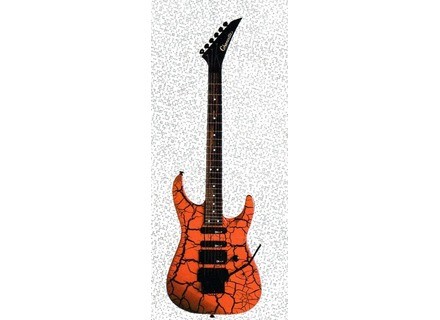 heads on fire's review"Worth it for collectors, but not players."

This is a good guitar on the surface, but I just could not get into it. The neck was ok, yet with a weird shoulder on it, and the tone of the pickups was flat, lifeless, and uninspiring. Even the tremolo system felt much too stiff, even after a setup. The guitar was intended for shredders, and maybe I played a lemon, but I was not feeling this guitar. From a strap, this axe is a bit heavy, so it could be uncomfortable for stage usage. The random hardware parts seem to be a bit cheap on the quality as well. Build quality is akin to the lowest-end Squier guitars of now, which is to say, not that great. The finish itself was actually one of the better aspects of the construction of this guitar.

The tone of the pickups is just bland, to put it bluntly. Yes, they work, they transmit string vibration into electric soundwaves, and the sound isn't bad, but I didn't hear anything special from this instrument. It was just an average, run-of-the-mill tone, similar to what nearly all of the hair band guys in the 80s used. There wasn't a lack of clarity, but there wasn't a lot of it either. Lack of a tone control also didn't help - there's less versatility here.

Overall, I would only recommend this guitar for a collector of Charvel guitars - something to complete a special collection year, or as a wall decoration. It would even be a decent first guitar, but for the intended market of shred players, this guitar is nothing special. Again, not bad, just not all that good either.