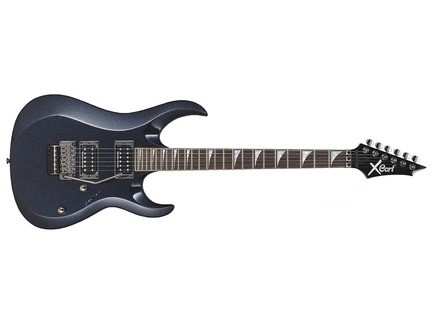 Cort X-Custom
5
Too bad, I do not know much about the provenance of this guitar and I do not know what kind of wood it is made, but it is done well.
a round of 24 cases, two EMG 81 and 85 a floyd type and a block nut string vibrato for the classic metal guitar.
on the other hand, originality just design by Sam Shearon, huge.

The handle is quite nice and comfortable but not extraordinary, the Ibanez sleeves are usually a little faster, but it is still very decent.
For cons, the marks on the sleeves require time to adapt to not get lost.
The rest is classic, the standard form strat gives good access to acute and the guitar is well balanced, the floyd is good, nothing to complain the above.

To be clear, anyone who buys a guitar with this mouth to play country just not understood, it is the sudden, severe, heavy.
The classic combo EMG 81 and 85 develops a powerful sound, heavy, yet very well defined and precise.
I use a line 6 spider valve, but the modeling of the mesa boogie Dual Rectifier is by far the most solicited with this guitar.
I tuned in drop D to go lower and the record is very clear and very large.
The neck pickup gives a good bass sound, ideal for rich harmonic solo and the bridge pickup is really nervous and incisive.
Great

it will be three years that I enjoy with this guitar that I bought more for the occasion (870 € instead of 1440 displayed) and it is one of the best purchase I made.
The mouth, the sound is huge, there is really only the handle is good without which pins require an adjustment period.
For normal price, this is a good guitar, but for the price I got it, it's a great guitar, I do not let go.

pikoose's review (This content has been automatically translated from French)

Cort X-Custom
5
Guitar made in Korea, 24 Cases, basswood body, handle, saddle and rosewood fingerboard
2 Seymour Duncan humbuchers:
- A sh-2n Jazz in the neck position
- HS8 an invader in the bridge position
Floyd Rose tremolo quite prcis
a volume knob a Tone of a 5-way switch

The handle is trs enjoyable and quite late
is a super light scratches: 5 kg has just perfect for the scene!
Versatility is good especially for metal and other rockers ms good it is for non ca?

It suits my style of music (metal)
bridge pickup demivre good power for the song and the disto clean the bridge pickup and to ca!

I use it for a week and I am more than contentious!
ke I would do well on this choice without any hesitation a scraper 630 for this quality what more?
Did you find this review helpful?yesno
»

Satch Jr's review (This content has been automatically translated from French)

Cort X-Custom
5
Scratches made in Korea,
The main features are:

- Ben's body, which is basswood,
- The neck is maple-like "Bird's Eyes' and looks a nice thread (binding) white
- A rosewood fingerboard with 24 boxes,
- 2 Seymour Duncan humbuckers (the real ones, not the Designed) that can be slpittés by pulling the tone knob, so we have:

it seems that the combination of microphones favorite of Mr. Duncan.

for the series post 2002, the SH4 is replaced by an Invader SH8, always with Seymour Duncan

- Vibrato under liscence Floyd (accurate enough for that matter), it would seem that all liscence Floyd vibrato are manufactured under the brand Schaller (yes the vibrato on their website to look like)
- An overall volume,
- A general tone,
- A linear 3-position switch,
- Push-pull integrated into the knob tone,
- Black acastillage
- Matte metallic black paint on the current series and black metallic gloss on mine.

I think nothing is missing, except perhaps a second volume knob? but not that it will be happening quite easily. What is pretty basic ...

So a guitar fairly complete with quality components, both the wood as electronics, which makes it even better!

Bon ben is not a MIDI guitar, so it's pretty easy to use. The Floyd could be a problem at first, but it's not exactly EC floyd but rather of the general system ...

The neck is flawless, the end (but not this like a leaf cigarette), fast (enough to wake the shreddeur someille in you!) But rest assured, it's not a stick Gibson!
For me, I would say it is between that of a stratum and that of a home Ibanez RG (these guitars are made in factories Cort and not vice versa).

No frets that are outside of the handle like other guitars even more expensive.
Finishes impeccable. "
It is super light (only a strat) which is an asset to the scene

Small point which can be negative for some (not me!), It may not be versatile enough for some, but hey, it's still a skyscraper designed for rock and consors, non?

I could point out to the so-called lack of versatility but somehow he who seeks extreme versatility will buy a Start! So 10!

Added 19/12/05:
it's been over 3 years (purchased in July 2002) I use this guitar and nothing has changed.
Well it must be on the set from time to time because the wood moving (like all guitars), but it's really cool that she did not move since I have.

This is a scratch built mainly for rock, metal, etc. .. (Shape says a lot!) But not that.

Let me explain:
I reminds that these are the real Seymour Duncan made aus States, not Duncan Designed manufactured in Indonesia or Korea.

Neck pickup: Seymour SH-2 Jazz
it delivers sound round and fat, while remaining clean in a larger attack. It is a micro primarily for clean (in my opinion) and property crunch round.

Bridge pickup: Seymour SH-4 JB
SH4 on him, is more aggressive when the attack force and delivers sounds more than adequate. Very good performance in the low (no drooling, aaaaaahhhhhhhhhhh) and precise treble. I advise you to have a look on the opinions of these microphones

The microphone splitter, are found close to the sound strat 'with less background noise. Config versatile mic, but is still in the catégarie "big sound"!
Any takers ...

It's now over 3 years that I use and I am more than satisfied.
I bought € 680 I think it's a (very) good deal especially as the prices come again to fall. A quality / price ratio than good.
I would do that choice without hesitation
I am advised that sounds very right for a great price, which could easily view the € 1000.
It's an Ibanez RG guitar superior to that, they are much more expensive.

Droksu's review (This content has been automatically translated from French)

Cort X-Custom
5
Made in Korea if I say no nonsense
24 frets, no marking points (difficult at first).
Licensed Floyd Rose Lo-Pro type.
Micro Channel and SH2 Invader SH8 bridge that sweeps everything in its path.
Rosewood fingerboard if I am correct.

The neck is ultra agreeable, only the fact that there are no markings (points) is a bit annoying at first.
Access to acute is very easy.
So it's a stratocaster level ergonomics no particular concerns.

To the sound is just "monstrous" quality, the SH8 Invader is a real-oat prunneau super accurate, but it is a passive microphone whose output level is high.

If you are looking to play metal, especially something with one hand rather Thrash, in his incisive rather something that's really huge! For those interested in home recording Légé that you can take a look at the track "Black Metal Mix" on my myspace ( http://www.myspace.com/droksu ) which was created with this guitar.

Otherwise all styles can spend, the guitar is pretty versatile.

Staff flat, but truly personal for the neck pickup in lead I was looking for something more "vintage" like sound, it says I am not an expert, and this may be just my amp and my settings.

Less than a year of use, what I like most is its truly value for money, which to me is unbeatable, as most purchases at Cort elsewhere.
Other models before? in some of Cort, LTD home, nothing more.

With the experience? I would look can be a bit later in my sound, Cort KX-Custom seems to be an even better choice, but it says it remains personal.

This guitar is truly monstrous, ay nothing wrong, if you have questions you can always contact me on Audiofanzine!
Did you find this review helpful?yesno
»