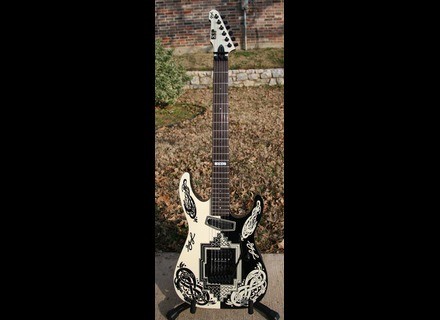 Serpent, STC-Shaped Guitar from ESP in the George Lynch series.

ESP Serpent
5
This is an extremely rare George Lynch model. I've only had one of these come through my shop before, and it went for a pretty high price when we sold it. The headstock, pickup configuration and a few other things make it a bit more rare than the normal version. The guitar features an ash body, a maple neck with a rosewood fretboard, 22 extra jumbo frets, dot inlays, a Schaller Floyd Rose (dunno if this was stock?), one humbucker, one single coil, a volume knob that doubles as a pickup selector via push/pull function.

The guitar really shows that ESP has been building great quality guitars for quite awhile. The overall finish work on the guitar was showing some wear due to this being about 15 years old, but you could still see the attention to detail on the finish with the guitar. The graphic on this was very cool looking. The frets were showing some wear, but the ends were nicely filed, and there were no real issues with it other than some grooves in the frets. The floyd on this was a Schaller, and I'm not sure if that was stock. It might have originally come with the ESP Sinclair bridge, but I'm not entirely sure.

The guitar had the Screamin Demon in it with the ESP single coil in the neck. The Screamin Demon is similar to an underwound 59. It has about the same output, maybe less. It develops some cool overtones, but I wish it were hotter, especially for this kind of music that people play with these guitars. Through a boosted Marshall, it feels like it needs a bit more of a kick in the pants. The ESP single is really nothing noteworthy, either. That said, it was very resonant and sounded great unplugged.

I tend to like these versions better than the other ones. They're not as bright, and I think they look cooler as well. The problem is that they're hard to come by, and when they do show up, they can be a bit pricey as people tend to mark them up due to their rarity. I'd replace the pickups with maybe a Custom in the bridge and Hot Rails in the neck, but that aside, it was a very cool guitar.
Did you find this review helpful?yesno
»