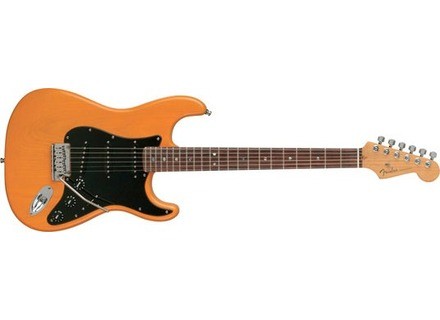 Fender American Deluxe Stratocaster Ash [2004-2010]
5
The Fender Stratocastor guitars are those iconic instruments that has really stood the test of time. This is an instrument that has given influence to dozens if not thousands of guitar manufactures and boutique builders all around the world. It's one of those instruments that has given influence to musicians for many recordings and gigging sessions. It's also an instrument that has brought a culture to the rock 'n roll music world.


I love the tone of the Fender Stratocaster because it meets every demand that I'm looking for in a guitar instrument. It has the right balance, feeling, and tone for the needs that I have. Pretty much any setting that I put it in, it feels good and compliments the current rig or setting. Whether I'm using a load of effects on the floorboard with pedal boards or effects or a clean amplifier to a high gain amplifier Fender Stratocaster will complement anything that I put it in. It's a kind of chameleon type guitar because it adapts to its environment quite well. The tone is lush focused and smooth, and that's probably why I really dig the character in the vibe of this instrument.


You can find these guitars for right around $1500 or so in the new market. They hold their value quite well so I would suggest picking one up on the used's market if you can find a good price. They are a great for recording and I highly recommend every guitar player on the planet to own at least one Fender Stratocaster at some point in their career.
Did you find this review helpful?yesno
»

Fender American Deluxe Stratocaster Ash [2004-2010]
5
The Fender Stratocaster is an awesome guitar that has stood the test of time. These guitars are crafted and built to be absolute rock machines. They have a great home in a great feel overall. The instrument has an almost perfect balance and weight from top to bottom. It is a great guitar that works well in pretty much any musical situation you can put it in.

These guitars come with three single coil pick ups control knob into tone control knobs. You also get a five way pick up Selectric. For the feature wise it doesn't get really any more basic than this.

I really love the tone of this guitar primarily because it has a great feel and a great voicing for most music. It is extremely versatile and can branch across genre to genre of musical styles. They have a great feel to them especially when you use the neck pick up. He did a really soulful, bluesy tone that nixes very well in many pop and rock music. These guitars just has that "It" factor about them. I think it may be one of the selling points and guitars is this perfect balance and alignment.


These guitar you can find in a used in classified sections of many forums online and in many retailers around the world. After not very hard to find if you have any kind of musical retailer in your town. You can find a new pretty easily as well and just depends on which color you prefer. At new you can find these guitars for right at around $1650. A little bit higher than some o the other models but these have a certain more balanced feel in my hands than the standard series.
Did you find this review helpful?yesno
»

Fender American Deluxe Stratocaster Ash [2004-2010]
5
Fender has been building guitars for half a century now and they have changed little about the classic American Fender Strat that has made them so famous. These guitars have been so popular that nothing other than the Fender telecaster and the Gibson Les Paul have made such a huge impact on the guitar world. Many other builders have copied this design and body shape and some have made it better but nothing says rock n roll like an American red Stratocaster.

This one has an ash body which is not my favorite when it come to Strat guitars. I would much rather prefer the alder body wood with the maple neck wood. This will make the guitar thinner and lighter in sound compared to the alder which is a little warmer with the alder.

They sound good with Fender amps , with Mesa Boogie amp as well as they with any Marshall. They sound just flat out amazing to me. There isn't too much variation of tone between Strats. They either sound like a Stratocatser or they sound like a Telecatser. You can definitely hear the difference. Something to be said about the original and you can get boutique all you want but the Fender Strat is still a staple in rock music. So the 50th Anny is a cool way to remember the first original rock guitar master.

At new these guitars come in right at around $1600, which is a great price for a guitar that is built in America. This guitar just screams to be played and played hard. You can a great sounding guitar for under $2000 and many places online will include free shipping and depending on where you live you can get no tax which is even better. I highly recommend this guitar to anyone flirting with the idea of getting an American classic deluxe built guitar. It is a one high performance machine.
Did you find this review helpful?yesno
»

Fender American Deluxe Stratocaster Ash [2004-2010]
4
While alder is their main wood that Fender likes to use, they're also known for their ash bodies. The ash bodies bring a different flavor to the table that none of the other strats seem to have. This guitar has an ash body with a one piece maple neck, 22 frets, two point tremolo, three single coil configuration, one volume, two tones and a five way switch.

The major issue this guitar had was that the nut needed to be reshaped a bit. There was a buzzing on the g string that wouldn't go away no matter what angle the string was at. Some work with my nut files fixed that bit up, but it's just something to keep in mind. The frets on this were pretty good without too many issues. They were a touch flat, but they were nice and even. The ends were also rounded, so they don't cut your hand every time you go up and down the neck.

The first thing I should mention is that ash bodied guitars tend to have extended lows and highs. This can work out nicely with strats at times, but it can also make them too bright if you have the wrong pickups in it. This had the Fender SCN pickups in it, and they were great. The bridge was super powerful and fat sounding, but it had enough treble to cut. The neck got an awesome vowely/bubbly lead tone going on, and the in-between positions were awesome for that quack sound. However, they're not terribly dynamic, so low gain guys might not enjoy them.

The ash bodied version of this guitar has more bass and more high end. It gives you a fatter sound, but it also allows you to cut more. Some people really like this, and some dislike it. In reality, you just gotta play it and see how much you like it yourself. I also find them to be a tad heavier than normal alder bodied strats, so keep that in mind.
Did you find this review helpful?yesno
»
Read the 17 user reviews on the Fender American Deluxe Stratocaster Ash [2004-2010] »