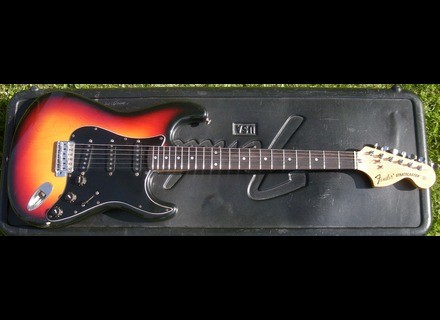 ST72-xx, STC-Shaped Guitar from Fender in the Stratocaster Japan series.

Fender ST72-xx
4
For some reason, a lot of people don't seem to know about the MIJ/CIJ guitars that have been slowly making their way to America. These are great guitars that can be had at awesome prices. They're at least on par with the MIA models, and they sometimes even play better. The guitar had an alder body, a maple neck with a rosewood fretboard, 21 frets, dot inlays, a vintage style tremolo, three single coils, one volume, two tones and a five way switch.

The fretwork on this was great. The frets were level, and I was able to get the action I wanted without having to fiddle with the guitar too much. With a lot of the MIA and MIM guitars, I tend to have to either settle with fretting out at certain action or get the guitar fret leveled. The neck joint on this was nice and tight, so no issues there. The nut was also cut properly. The finish was a bit worn on this guitar, and that's probably the biggest flaws on these guitars. I find the finishes don't seem to be quite as nice as the ones I see on the MIA models. If you're peculiar on looks, that could be an issue, especially on the sunburst models.

The pickups in this were pretty decent for what they were. I will note that the electronics in this guitar have been replaced by the previous owner. The pots are brand new CTS pots, orange drop caps, high quality 5 way switch and even a brand new Switchcraft jack. The biggest downfall about these guitars have always been the electronics, and it was nice to see them replaced with higher quality components. The bridge had a nice bite to it, the middle mixed well with the neck/bridge, and the neck was nice for leads. Cleans were also pretty solid with this guitar.

If you happen to stumble across one of these MIJ guitars, I highly recommend giving it a go. They're put together as well as the MIA models, and they tend to sound just as good, too. The finishes can be a bit odd at times, but they're still pretty cool guitars.

Fender ST72-xx
3
The guitar was made between 85 and 86 in Japan. It has a bridge and Gotoh vintage guy a little cheap cars. The neck is maple with a maple fingerboard reported, it is quite thin type D wizard and has 21 frets. Last but not least, the head is shaped CBS. I'm inclined to think that this large head butt is the only thing that redeems the abject seventies. And when I say that, I think everything: Pompidou, Yes, the pants legs eph', Guy Lux, Bontempi organs, Brezhnev, the Rubettes, Giscard, Honda fours, armed leftism and booms where girls kissing when leaving. Otherwise, the electronics are standard: five switch positions with volume adjustment and two tones. The body is made of ash. The polish is nitrocellulose natural color vaguely tinted. So it's rather a beautiful object and, surprisingly, in a perfect condition for its age.

The handle is excellent, very light guitar. No problem of access to acute. The set of original pickups mounted is excellent and very powerful. Personally I am a fan of the 4-position for arpeggios and flat picking and position 5 for solos. The bridge micro seems meanwhile unattractive under the slamming of the micro bridge telecaster. I think up a hot track as soon as possible.

I play in a country register, blues, indie-folk (say, a kind of americana) in a pretty cushy trio. I play on a tube amp and a dozen effects to save but to get out, I have a quarterhorse-amp pedal with Traynor which saves me the hassle of transport for a fairly good sound result.
The sound is off. A wide vibrato with spring reverb and tremolo and shoo! we see the Mojave Desert, Joshua trees and bloody cliffs under the relentless sun. After, of course, we go back to tuning. I do not go out before you change the mechanical and tremolo which will, incidentally, relieve me 200 euros at least.

At this point, I think we understand it does not take the deal. A wide vibrato and presto! farewell the ground rope. The high E is fantastic and fits the tone he likes despite my best efforts. So you never know what note it will produce. Surprise ...
I am not my first guitar. I had to have a fortnight and I played on just about everything that exists if the black stuff while we exclude acute angles. Well, it's a bargain, provided be considered a basic need some solid upgrades.

crankedtones's review (This content has been automatically translated from French)" Case to do!"

Fender ST72-xx
5
The specifications of this Strat manufactured in Japan are:

This is a reissue of a 1972 model limited edition (one hundred pieces in Europe) imported from Japan only by Fender in 2013.

The guitar is lightweight, it should be emphasized as the original models from 1972 are deemed to be anvils (do not tell me you never noticed that the first argument to try to sell a Stratocaster CBS is its weight?).

The neck is thin and fast, nail does not catch. Accessibility to acute is a strat, it's great but it stops at 21.

Overall the finish is simply breathtaking (in comparison between my stratocaster U.S. John Mayer and my Custom Shop 64 it is the level of the Custom Shop), installation of frets, the junction body / neck , paint, varnish, impossible to detect the slightest flaw, I have rarely seen this on a Fender "factory".

Obviously when we compare this reissue a real Stratocaster 1972 the difference is amazing, for the reissue of course! It has the look of the time (one likes or dislikes, I personally love) without expensive to CBS defects!

Side original pickups it is not against the foot by, it sounds very clean but it lacks character. This is better than Mexico but still it is too bland for my taste.

I replaced the whole with a full pickguard Nicolas Bread with 2 microphones and 1 Vintage Hey Jimi Special Easel with potentiometers and capacitor that go there and .... wow! Slap, it breathes, it lives, it sounds, it does what! So for less than 1000 EUR (680 for guitar and 300 for the full pickguard) was a fantastic guitar, probably the best value for money for a new Fender Stratocaster.

It's been a while since I heard Fender Japan and quality and as a fan of stratocasters it was one day that I start the adventure. Well, I do not regret it and I confirm everything that is said on the forums on the "Made In Japan". We understand why Fender Japan restricts imports of models in Europe because for them the differences in quality and price are such that they would derive a shot in the foot by opening the valves. So whether it is for speculation, OK, prefer an original time CBS model. If you are looking for against a quality instrument for a very reasonable price, go for it!

In short, if you find a Fender "Made In Japan" try there, the only risk you take is to start with!

ricoute's review (This content has been automatically translated from French)

Fender ST72-xx
2
Made in japan

Till I saw some descriptive basswood or ash but alder priori conventionally, it seemed lighter than the PC 60's

nice handle, normal freight not very jumbo varnish (there are small gray mottling not great aesthetic) it seems that it is plastic, but it is obviously not the case.

Head together and touch a little palot because we used a more ornage on vintage, varnish that there seems to be a natural white wood in a little pine

ergonomics is typical of a strat, but I was still confused, I do not know what this is due ... out of a 60's classic player

This is where the rub, let me explain.

Tried on a large combo amp, kustom sound seemed very good, with the comparison of the CP60's (which zozonnait not bad enough shiny, metallic), made me appreciate the other extreme because of the CP60's me came out a bit by luck!

After 1 test stealth and extended essay, I did not like!

The report is absolutely not in the rendering and slamming round is expected of a strat but still a very good sustain, even at a pinch a little suspect for each stratum.

The bass is a very good range but not warm and round not in the typical rendering, there is a medium level of fat honest and fairly short and quite paradoxically brilliant but not sharp crystal clear sound when you search take a strat on

With systematic sustain, but a very good output level of micro, I can even make cruncher mo npetit marathon did not do with the PC's 60

But despite this high level of output these mics, there is no attack, and I confess that last test, after having tried different mics and positions of knobs she returned very quickly in its case, obviously this is NOT AT ALL THAT!!

Marathon carvin amps and V3m.
Initially, although the marathon respects the grain, I thought with the carvin it be anything else, but alas, it was the same finding of a total disappointment!

Or its bold (this is not a Lp) or crystalline sound that I would describe as any.

More strange is that with the distortion, I kept the same grain with the PC 60's here there is a little buzz species that modifies the grain loses homogeneity, can be e ncause sustain too systemtique not very natural (resonance ghost?).

So you will understand that there a nun so little blues / jazzy mic milia with a knob 7 and 4 severe acute making a nacceptable so, everything else very blah blah.!!

I had a week and I made!

I do not know if it's my copy in question was at issue or series (Tsunami!!) That is involved but in any case a very disappointing jap series are generally excellent alternatives and choice to us, but then a little over 700 € in nine of course, there has obviously a concern!

No, I ESPECIALLY NOT remake this choice!

Did you find this review helpful?yesno
»
Read the 5 user reviews on the Fender ST72-xx »