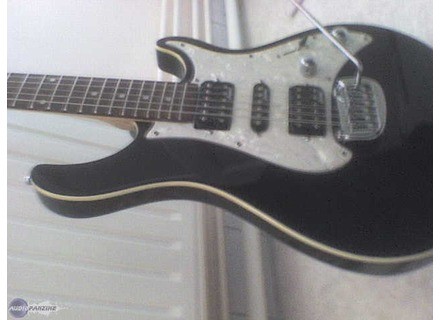 Guvnor GE500
5
-Made depending on the brand's website Durham in England
-table flame maple (but is not seen in the photo because of the black varnish) wooden binding around the table, basswood body
- Easel knives and rolling over each bridge (class!) Of the type GTL 050
- Maple neck, rosewood fingerboard.
- 2 double configuration, 1 single, 5-way switch
- 1 volume, 1 Tone.
- Mechanical oil bath
For the price 253 euros rgle demand by the store), this guitar really offers maximum:
- It puts a slap to Squier wooden crate and very well finished yamaha pacifica but the pickups are really rotten ...
This is my thirtieth guitar, I bought because I liked the look!
For the price they demand is 10!

- The most important when buys a guitar of this price, this is the handle, and it's comfortable! Small and thin, he can play very fast and especially for hours. It is largely that of a Superior Squier is too coarse. It is less than a flat pacifica more typ (blues rock).
_ Given the dcoupe body pump the guitar Brian May's access 22ime the box is done without problem ...
- The body of the guitar is a bit small, trslger, I do not like lgres guitars ... But, for the price and because it is a r guitar pt ', great.
- The sound is strong bridge this guitar, it really covers a wide range of sounds!

- I play blues, hendriens rock, sonic youth, a bit of free jazz RAS so it's all good.
- I use a fender twin to the blues, a Laney 50 w for ditsos prfr but my amp is a line 6 of 75 watt. (We all sounds under the feet!)
- In clean the guitar sounds really good, she and accuracy of all net. No hum! With 36 years, I am amazed to see how much qualitprix repor guitars has amlior!
Imagine a guitar of this quality it 20 years ago was unthinkable for that price!
The double neck is doing very well and overdrive crunch, while the middle is a killer single, ideal for playing Purple Haze. The double bridge possde an attack to aggressive or gentle solos if we lower the tonality.

In Disto very heavy death metal type, it is not worth my Cort Mount EMG indeed the neck pickup is a little fuzzy to play death metal. But I think we can not have it all: a guitar that sounds good in clean and rock is not very heavy weapon for distortion.

In conclusion I would say that this Guvnor 500est destiny to blues and rock, Hard old school in this area, it rivals guitars that are triple the price ...

A beautiful guitar that sounds great, with a vibrato bearings, 2 doubles - a simple and manufactures in England for 250 euros ... where is the catch?
I do not know. It is well worth guitars 3 or 4 times chres my collection ..
How not to buy?
Perhaps it is only assembled in England with pice came from Asia like Fender HIGHWAY 1 that are in assembled in the USA?
in this price range, this guitar really has no rival. This is not even a good beginner guitar is a good guitar "for short."
With 22 years of experience, I would do the same choice. The quality of this guitar is really phenomenal !!
Did you find this review helpful?yesno
»

Guvnor GE500
5
Well, first I think I bought it the guy who posted the notice below. So you may be two opinions on the exact same guitar <img class="smiley" src="/images/audiofanzine/interface/smileys/icon_lol.gif" alt="" />

It is all assembled in England says the site. on the other hand I can not find where the components are manufactured. Note, as there Guvnor wrote on absolutely all parts (even behind the mechanics, if, if) you're sure it's the Guvnor.

It's a floating bridge without rope blocks, with a tremolo that can pitch up and down, like a Bigsby. Well that's the theory, because if the tremolo effect works well in it out of tune my guitar so I removed the rod. Note I do not care, I'm using it anyway, but it was nice, it gave him an air of Cyclone.

The pickups are two humbuckers conventional (on-site, these are so-called Alnico V which are used for the neck pickup) and a neck and bridge single coil in middle position, driven by a 5-position switch that must make my ear single handle - handle + middle - the middle one - middle + bridge - bridge alone.

One thing to note, as any guitar that gives an impression of beautiful materials, the pickguard in perloid is magnificent, it is the opposite compared to that of a U.S. Fender. And real metal buttons are clumsy. Speaking of which, the binding timber cream is very nice too.

The neck slides very well despite the absence of thick varnish, it is very comfortable, reminiscent of a Tele. I play mostly sitting, and it is very comfortable. I do not find it very light but must say that my other guitar is a Danelectro, so obviously ... The shape of the head is nice and the pearl inlay Guvnor is very successful. The general shape of the guitar was a bit surprised at first but now that I'm used to it, access to high notes is flawless, the guitar is well balanced for my playing position and has a shape both classical and very original ... Success!

The sound ... well ... When I took it out of the box, I played unplugged, like everyone else does and I told myself "what is this thing, I got ripped off." I had a little sweat. Then I plugged in my Fender Champion 600, and it was two hours before my wife managed to drag me away. The sound is KILLER for a guitar of this price. It sounds like a hybrid (I'm sorry it'll be a little rave) between a Mustang and a Jazzmaster, it can do very acidic / sharp / sharp in a surf style and also and fatter. On the neck pickup alone, it happens to sound really metal, even if it's not the guitar I would use for that. The best sounds are achieved by playing with the microphone in the middle and the tone knob. And I know it's the guitar that I'm hearing because as you know the champion 600 has only... a volume knob. With the Simulations (Revalver / AmpliTube fender) that I use, it sounds really good, and my laney tube, ditto.

I've had a month and a half and I play it everyday. And I still wonder how I managed to buy such a guitar for 150 euros. New, it is like 250 including shipping !!!!!! I also strongly conceille to buy on ibays England, the official vendor makes excellent prices. As I know since I have not long since, but question its money is the best deal I made. Plus she is super nice .... My only regret is the tremolo, but the quality of the bridge offsets. The materials seem solid and the quality of workmanship is impeccable. My benchmark for guitar is the Gibson Nighthawk I had several years and even though obviously this is less good (she is 7 times less expensive), it is not 7 times less good!

In 2055, I think that an guitarist of a famous group will buy one a 15 euros in a garage sale, and Guvnors will become the Teisco of the time ... Do not wait, buy one before then...