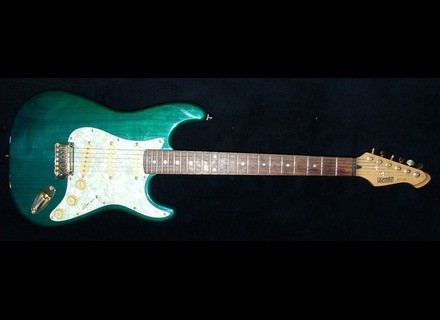 Draix's review (This content has been automatically translated from French)

Flat handle and plutt wide. Trs comfortable. Play an equivalent quality Strato Std.
For sounds, the ATN sytme promised much ... Browsing for little. No wonder no electronic! Otherwise, sounds good trs "phase out", clear and rich in mdium.Pour positions 1/2/3, I see nothing unusual.

Type blues-rock, the ST 59 Pro is its ease in clean or overdrive with a lightweight.
Not at all suitable to the consortium and hard.

I have over ten years. She did not move. She then had to rate in 2500 francs.J 'loves the table and the fawn pickgard nacre. Damn mouth for this copy that is well worth the strata made in Japan and other cons.

Hohner Professional ST59
3
Construction is Korean.
The rest is a copy of Start, 22 frets,

The bridge is similar to a strat US deluxe, but much lower quality.
1 volume, 2 tones.
A 5-way switch.
Hohner has used this technology scratches stamped
ATN (Advanced Tonal Network) which allowed them according to
obtain a wide range of tone.

The handle is flat as a flounder (not radius), not too fine, profile D, the key
looks like rosewood. (And I can confirm that no, it&#39;s not ebony. I have several guitars with ebony fingerboard, ebony and even not quite clear what grain).
Mechanics has not been marked, all hardware is gold in color but fade with time, giving
one side a little vintage that I like.
The body is in a timber that is unknown to me, veined with a varnish
trasparaitre leaving the wood grain. The effect is frankly
fun to watch. But the varnish is still very thick. It must stifle a lot of wood and resonance.
After removal of the plates, we can realize that it is not plywood, but solid. is reassuring!
The plaque at the base of the handle (screw, it goes without saying), the back is golden and embossed
with the logo of the brand and serial number, it&#39;s pro in appearance.
The guitar is quite heavy, I&#39;ll come back later.

The handle is quite nice, much nicer than a lot of copies of strats, and this despite the complete absence of radius (it would have been better with), fast enough, do not exceed the frets on the edges are polished. Just a reproach to the varnish on the back of the neck that will not slip enough for my taste but nothing too bothersome.

Access to treble is fairly good access to the box on the 22nd
Grave E string without too much fight in a sitting position.
Not exceptional for a form strata; classic.

In terms of ergonomics, we are in the form so the strat
forms embrace the body. Nothing surprising about that.
on the other hand, big surprise: the weight! It&#39;s incredibly heavy.
Yet he has gone from scratch in my hands, and all
my guitars, this one is among the heaviest.
Not tested again, but I&#39;m sure that after four hours, we
a trace of the strap encrusted on the shoulder.

For sound, capable of using as the ... means but not the worst, but
that&#39;s another story that we will see more ...

EDIT: Some criticisms of design. Hohner has chosen the party not to comply
the exact location of the holes for the front and rear plates of strato, forcing the body to have to re-drilling to fit standard plates.
Strangely, I also had to cut the new plate which does not pass in the handle.
Attention, with some tie a little high, setting the bridge becomes almost impossible, the race of the screws supporting the springs at the rear looks to me too short. The tie is ideal for me 9-42
The bridge looks to me pretty poor anyway.

I tested it in a Head Hughes & Kettner Tour Reverb, Fender Dual Showman and a cabinet with an H & K AC412.
So, let&#39;s clean sounds.
It&#39;s the middle of the skyscraper, you feel that there is a potential
is there but the microphones are not always up to par,
Intermediate positions are interesting, the micro serious
has a color a little greasy, velvety, the medium is a bit flashy
and treble, depending on the tones can range from not bad to frankly
means. There is the "bell tone" (Ringing Bell) classic stratum, which is not bad
This is not the great panacea. And we feel a lack of definition
in the bass.
The attack is not very honest, it does not "slap" them.
And dynamics is not very extensive.

The turn of the crunch sounds!
Ah well it looks like it is designed for that, it&#39;s dirty
desire as what I expect from these sounds, and whatever the
microphones! Always that slight lack of definition in the bass
I deplore.
Well, it means, but ...
It engages the distortion.
Well, scratch that is not made to play metal, it sounds
rock, post-rock, hard-blues, hard rock old-school not too bad.
It&#39;s fun no more. And even weakness in the damn cete
serious.
The distortion sounds are good but not transcendent.

I do not see what brings ATN compared to a configuration
classic.

Although I think the sound seems hard enough, the sounds are
over many copies of strats other brands.
Moreover, the sound is already typed strat although
quality is a disadvantage with the original e-mail.

Violin making me look good on the body to warrant a new mail, but not sure quil to be the same for the handle.
And I must think to change the bridge of doom.

The original pickups are really not up to par.

EDIT: A few months later, I get new pickups, the GFS alnico blues.
The clean sound is better, less serious "sounding" less rough.
Mediums are velvety, and treble level in returning.
The dynamic is markedly improved.
Very large increase in the harmonics. They obtained more easily. But hey, still not sustain and it is still not a panacea ...

I have not deleted the ATN system, which apparently is mounted in place of a condenso that should be there and I feel that the damn system ATN night away more than anything else.
I try to learn more before making the change.

Tested a few years ago, and received today, I needed a
itch too expensive for me to type delusions of customization, and I think I is the ideal medium for that.
Moreover, the model I had a few scratches and a nice
scratch in the varnish that provide visual side rock&#39;n&#39;roll / live
I can not afford to have on my other guitars.

If I tried other guitars before? While there, yes, and all sorts!
of the stratum to the SG through the Les Paul and other semi-boxes.
But it&#39;s more for fun and the ability to fully customize the scratches that I acquired.
The tests were not that important.

Although the absence of the radius does not interfere, it would have been much better if the handle had one.

Given the price for which I got it (160 € fdp included), and even the price at which it was at its output, the report Quait / price is right!
Possess a beginner is a nice instrument to learn guitar. Body and handle are not bad. But against, all the electronics and mechanical to be replaced because very low end.

Ok, I put a small 6 for these defects but it is a guitar
beginner, do not expect wonders.
Albeit a Tubescreamer, the delay and a Fender, I see or put on some pieces.

If I would do this choice, if you read my mind, you will understand
yes.

vincent palmer's review (This content has been automatically translated from French)

Hohner Professional ST59
5
For the construction says it all does.
It is a Stratocaster copy Fidler enough in shape and dimensions. The body, I think is in Saddle: it is quite heavy. But for me it plutt good sign.

The handle is enjoyable trs. Access in acute is like its great on amricaine excellent. Ergonomics are good surprise some weight.
Then the sound! And of all RSID in the right use of electronic original trs (Systm ATF) that disrupts the user during THE FIRST grip. All played with the volume of CONTRL. Unlike conventional MODELS, sounds can be obtained depending on the trs DIFFERENT rglage volume. I play a lot in its saturated. And at the Premire grip, I got t trsdu sound. With the knob back on its draft silent trs, trs Hendrixien even, but without pedals ... APRS, the usual electronic m'tre if particulire, I have a guitar in his Discoveries ample, vintage, powerful and prcis (provided you do not jou background) . The clean sounds are good and less subject to the effects of Systm (ATF).

This guitar should have done my whole style of music is classic 50/60 rock'n'roll, blues-rock. I play (the countryside on weekends) on a Fender amp transistor 15 w and I get a powerful and wide.
Moreover, for example, nothing beats a good dmonstration, I invite you watch this video:


So, ds that we are accustomed to Systm ATF was in the hands of a true vintage Stratocaster at the trs and powerful!
Besides, I think the pickups are good and in any case certain size for the ATF Systm. So I change them deprecated. Except, change the entire electronic and thus disassemble the Systm ATF and replace it with an electronic classic.

I use it for 3 years. CASH EXPRESS bought in for 100 euros, by the time my guild had lch report quality price is extraordinary for a Stratocaster suprieure MODELS Mexican and some models amricains for that amount!
I'm so apprci this guitar, as I had two.
But I did not keep the deuxime because the former Owner 'had changed the pickups for alnico blues. Or totally changed the sound and silent silent trsdcevant same (flat and no saturation n'tait possible)!

So, finally a good trs guitar really cheap. An electronic do not touch. Except, perhaps be, if we change intgralement.

Jmm061048's review (This content has been automatically translated from French)

it suitable for many styles
Gibson's Fender Telecaster with strato and even the PTB
Like all its sound (as good as my strat U.S.)
I love everything about this guitar, very nice, very well done, good sound, fun to play ...

I use it for eight months on stage with my Stratocaster and my michael kelly
I have 40 years on stage and played with a lot of grat. but it's one of my favorite
No negative point
can still be found between 80 and 100 euros, must look! ! !
I just bought a deusième another color.


6 of 7 people found this review helpful