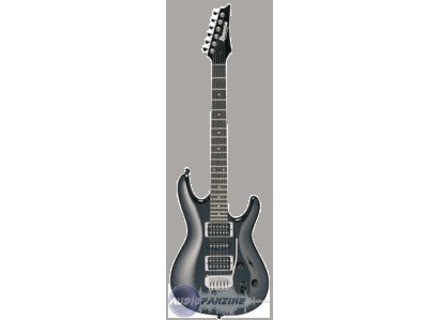 Bast'6's review (This content has been automatically translated from French)

Ibanez EDR170EX
4
So this beautiful little t Ibanez made in Korea, his neck is a Wizard II (https://www.ibanez.co.jp/world/products/eg/neck/edr.html) It has 22 frets (Jumbo Frets). The body is luthite (trs matriau composite solid and replacing the wood very well, even if it's a bit less), and there are three pickups: 2 humbuckers and one single coil Powersound Powersound (in MSM, with classic Ibanez). Then there is a microphone slecteur five positions, two knobs (Volume and Tone), and finally an easel FAT-20.
Vala for CHARACTERISTICS ...

So, using this scraper is a "has played itself"! No, seriousness, the handle is incredibly simple to play, Access in acute is no problem, and ergonomics (Ergodyne. ..) is perfect!
I think you can get a good sound trs easily (I say "I think" because I do not know if what I play is "good" or not ^ _ ^)

After a few moois use, well I'll have to lower the note I bet (which ignores the dpart a 10/10) parcequ'elle is not so with a back. Let me explain. The vibrato really does not keep the agreement, or not at all. Then, the microphones are enough to eventually, and it is better to change them (at least now, the 2004 version of the guitar was delivered with EMG pickups, this change may be the sound quality . Namoins, even when I advise, for those who want to change the pickups for Seymour Duncon: SH-6 Duncan Distortion (H Neck), SRC-1 Cool Rails (S CENTER) and PATV-2 Distortion Trembucker ( Bridge H)).

The mtal? Ah well it is just his thing!! She's a super aggressive, and microphones can play both the big hard greasy typ Slipknot as' tit punk typ Good Charlotte. I use a 22 amp Watts (a Guyatone Zip 100) and the sound is done well, fairly aggressive, trs acute noise level, but that's only I bought it! ! However, I have 8 out of 10 because I think the scratches may serve inch in styles other than rock. It's a shame, but hey, it's not an inch Gibson SG!

Premire, I no longer use the plow on a 22 watt amp but Guyatone Zip100 Marshall MG50 DFX on (50 watts so: D).
Then, as my version of the guitar is the classic version (the Ibanez lineup for 2004 offers no more than the EX version), microphones (home of Powersound Ibanez) are really Suck !!!!! A lot of feedback from feedback and a ton of microphone (mean fucking ringing in my laptop softphone !^^). So, I lower the rating (8 / 10) 5! (Like take a Ibanez !!!!)

I bought it yesterday and I did in. coward! It is incredible! On an amp you get all rotten to leave the Manson correctly!: P Its only finally his only default sound microphones are Powersound and the vibrato is not a Floyd Rose (but in this case is to over 200 and take the EDR470). But frankly, it has an exellent report qualitprix (408 new: D).
on the other hand with the experience (and under), I prfererais that I could not offer me: the Gibson SG! : D (ok, it's not at all the same kind of scratch, but the SG, I like it!)

Finally it is not as terrible scrapes. Should not really be difficult! So finally I advise to buy the same kind in a Cort X-6, which is not only cheaper, but a Floyd Rose tremolo, a Push-Pull and Mighty Mite pickups certainly less sharp, but with much less microphone!
Did you find this review helpful?yesno
»

kefff's review (This content has been automatically translated from French)

This guitar is very polivalente you can play everything (sounds clear) but tends metal, hard rock (distortion) is that suits me very well and in addition does not prevent its playing a good old blues

I use it for 4 months and I think it's a good guitar for your beginning and even when we have a lot of experience (in short when we buy we keep it 10 years without problems)
I try other models in this range of (mostly other Ibanez) but I took it because I found the very polivalente and also very metal
the price / quality ratio is good and if I came back to square one I remake that choice without hesitation I believe
Did you find this review helpful?yesno
»

Sn@p's review (This content has been automatically translated from French)

Channel cool and slippery
cho for a little treble
weight slightly lours May with a good strap ... (I suck lay in a store with a strap lend)
EXCELLENT its May highs: S

Wonderful for the death rok hard on the heavy and even pop !!!!!!!!!!!
jai jou a line6 spider II 112 and ca pete c trop cool
its fat hot
wholes sounds are cool

May Raise prices a bit or nothing to say I wipers easily discover! (Price ....)
Did you find this review helpful?yesno
»

filou38's review (This content has been automatically translated from French)

Ibanez EDR170EX
4
We will not iron features ... apart microphones, c is indeed Powersound, c is the really cheap, but hey, they are still not a rotten this point, I have to exchange two seymour duncan , sh-2 jazz and sh-4, I have keep the microphone in the middle, and good, it really sounds weird ... c is due to the crate luthite ... it really changes the wood, if you hope warm sound of the scratch, go your way, in my opinion you can put what you want as microphones, ca will always do what its curious ...

The handle is nice, the Wizard II is a good race, is at least ca .... ca skids when even the high notes ... but hey ... I'm not satriani by weight against the result, one hour standing = 2 hours of reeducation ...

The sound, well ... it must love change so wood, it still manages to make cool stuff and unusual dining. C is on for the drunk or the song, it might make more than a laugh. ..
not, for cons to the music of space, good hard, progressive rock and symphonic ca password nickel.

C is a mid-range guitar, and even a little less than that, for the price, I'm not sure that it is worth the 450 euros that I put into it ais (you can do better) will do that for no microphones expensive of origin, but hey, she's beautiful (the output jack in the middle of the box, it sucks when even a little) relatively easy to play, and still nice, I would say that she is having second guitar fun, love you more if the fund luthite, c is an easily customizable scratches, which can quickly become a "big" with an investment, and yes it may be of delirium.
I do not think that choice again, but keep it as against the second guitar and customize without remorse.
Did you find this review helpful?yesno
»
Read the 5 user reviews on the Ibanez EDR170EX »