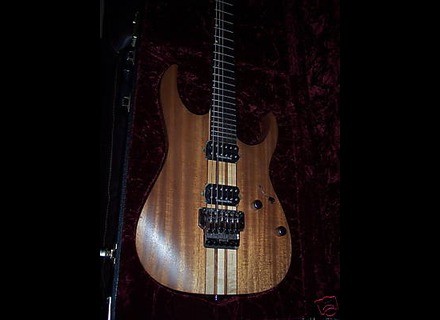 RG2020, STC-Shaped Guitar from Ibanez in the RG Prestige series.

Ibanez RG2020
5
This guitar is not the same as the one that special bridge in it that allows it to get acoustic-like sounds. It's not quite as versatile as the piezo version, but it still holds its own, as well as throwing in a few unique things. The guitar has a mahogany body with a neck-thru maple neck, rosewood fretboard with 24 frets, offset dot inlays, an Ibanez Edge Pro tremolo, HH configuration, one volume, one tone and a five way switch.

The guitar was a bit heavy, and I'm not a huge fan of heavy guitars. I find that they don't sound quite as open as lighter guitars do. Aside from that, the guitar was pretty much on par with the rest of the Ibanez guitars out there. The frets were great, and the trem was solid. In fact, the trem is very good. Some people like to rag on this because it's a little stiffer than the previous ones, but it's still a high quality bridge. It sucks intonating it thanks to the fact that there's no key for it, though. I really like the fact that it's a neck-thru model as Ibanez needs more of those.

The guitar had the stock pickups in it, and they were pretty annoying. The stock pickups in these guitars are not that great at all, and I have no clue why Ibanez keeps putting crappy pickups in their guitars. The bridge was bland sounding, and it lacked clarity overall. It works fine for that mid gain and clean kinda tone, but they suck with heavy gain as they sound mushy. The neck is much the same, except that it's a bit bright, and I find myself reaching for the tone knob quite a few times. The guitar would benefit from a nice pickup swap, and if you have the extra cash, I recommend doing that.

With a pickup swap, these are some great guitars. They sound a bit thicker and meatier than a normal Ibanez, and I find that they're better suited towards metal tones than the normal basswood equipped models. That said, you'll want to replace the pickups as they're the weakest link in this. Don't forget that there are other mahogany models out there with the piezo bridge, so don't be fixated on this guitar.