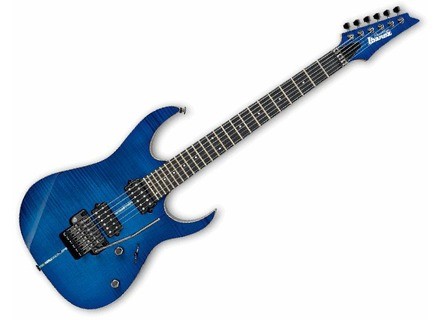 RG3620Z, STC-Shaped Guitar from Ibanez in the RG Prestige series.

Ibanez RG3620Z
5
New for 2009 is the RG3620Z. It's basically an upgraded version of the older RG3520Z. It features a mahogany body with a figured maple top, maple neck with rosewood fretboard, 24 jumbo frets, an Edge Zero tremolo, two humbuckers, one volume, one tone, a five way switch, binding and an abalone stripe.

Thanks to this guitar being built in the Prestige factory, it's put together quite nicely. The neck is nice and thin, so you can shred on this without any problems. The fretboard's radius is also nice and flat, so you can slam the action and bend to the moon without any problems at all. The Edge Zero is a nice trem, and while it's not my favorite out of the Edge series, it's definitely a solid bridge. I recommend taking out the ZPS system to make it feel even better. The access to the higher frets is also a breeze thanks to the All Access Neck Joint.

Probably the biggest improvement on this model compared to the previous one is that this has real DiMarzio pickups in it. The guitar features an Air Norton in the neck and Tone Zone in the bridge. The Air Norton is easily one of my favorite neck pickups. It's warm, fat, round and powerful. It does cleans awesomely, and it does lead tones even better. The Tone Zone in this guitar can get a touch bass heavy. I'm not a big fan of the Tone Zone in mahogany, but if you spend some time EQing the amp properly, you can get an awesome sound out of it.

I highly recommend this guitar over the previous RG3620Z. The biggest reason is thanks to the real DiMarzio pickups. Aside from that, it's really the same exact model. The necks on these guitars are great, and the mahogany body makes this a guitar really worth checking out. The only negative that I have is that I think the small abalone line that runs down the center of the guitar is a touch tacky... Aside from that, it's a great guitar.
Did you find this review helpful?yesno
»