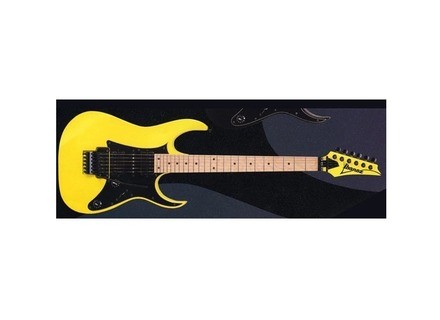 everything - this guitar is awesome! Plays like a dream. The wuper wizard neck is wafer thin and very comfortable on the hand. The trem can take one hell of a beatin before going out of tune and even then it ain't by much. The pickups are clear and crisp and the overall tone of the guitar is superb. This guitar can really handle all styles of music.

Not much, except that the RG550 is a little on the heavy side for me anyway which makes it a bit harder to thrust around quite as violently as Vai. Appart from that this guitar is all good.

The quality of this guitar is well above average. Only one small negative point: the finash is easily damaged but when it plays this good, who gives a F**K?!

This guitar is awesome. The neck is wafer thin and is extremely comfortable on the hand. Trem takes a hell of a lot of abuse before going out of tune and even then doesn't go out by much. The pickups are very clear and sounds amazing. Great guitar!

Not much. I find it a bit heavy to thrust around too madly but lighter than a les paul, but apart from that its all good.

The quality of this guitar is very good but the finish is easily damaged.

The 550 has great looks - the headstock, the body, and especially the neck. Its got great pickups for heavy rock guitarists and its a 5 way switch for the H-S-H pickup system. The floyd rose seems to be working great for the time being, and the fine tuners work great.

Great guitar. Little expensive. Buy it if you can afford.

Originally I only bought this guitar because it was so cheap and I was going to sell it on to a friend for a lot more than I paid.. he isn't getting it though

The finish was black, black scratchplate with white binding and looked supreme (even though it was second hand and obviously heavily played) there was a "shock crack" on the point beside one of the cutaways but it was hairline thin and you could only see it if you got the light to reflect off it.

The neck was maple and although it had been played so much that the wood had worn through the frets were fine although I was told that it hadn't been refretted and it certainly doesn't need it. Continuing with the neck.. It is beyond comprehension, it is just too good, too fast too nice.. and because it looks "played" it looks even BETTER.

Ibanez make the best necks in the world bar none and I either own or have owned most decent guitars out there from Gibson Les Pauls to Jacksons.. It beats them all into the ground with a massive wooden stick in the shape and size of Delaware

The pickups in this guitar have all been changed with the exception of the middle pickup which seems to serve NO useful function whatsoever it just shouldn't be there, there is NO point. Although I must say the originals were most impressive anyway, indeed I feel I have lost out on some things by changing them, the bridge pickup is "too" treble-ly and has lost some of the crunch it once had

The neck pickup has been replaced with the much superior Ibanez USA pickup from a custom built RG570, The bridge pickup I'm not so sure about, it isn't original but I don't know what it is although it sounds like a Kent Armstrong..

In general appearence this is one of the most shockingly beautiful guitars i have ever owned, mainly because it looks played, it reminds me of the ESP KH2 they released for a while which was basically an exact copy of Kirk's own guitar he used on tour with the "beatupness" and everything. But also because RG's can't help but look good.

She stays in tune very well and the tone and volume controls have a big range, they don't just explode into life as soon as you touch them, it's more gradual which is nice for cleaning up the noise.

It is SO versatile, it can produce some cracking sounds and is superb for heavy rock and metal.

There's not a lot to dislike here but I'll be as brutal as I can..

The Floyd Rose, I hate them with a passion anyway and i never use the trem, it's a pain in the ass to restring this guitar, that isn't the fault of Ibanez though. However the spring tension can be a real balls to set correctly if you change your strings to another gauge.

The trem arm itself is also "lower" than most and you cant make the strings go "SLORKCHURGH" by pushing it right down as it touchs the body long before this, although to be fair the good old "SLORKCHRUGH" sound isn't exactly the most healthy thing to be doing to your nice new Ibanez..

The volume / tone controls... the original "plastic dials" really annoyed me, I don't even know why exactly, they are just "bad" i replaced them with metal "domes" which are easier to use if you want to do any volume swelling tricks or anything.

It doesn't have a great blues tone or country sound, well mine does thanks to the bridge pickup, even though I dislike country music more than straddling cheesewire and lunging with a fantasticlly large sense of purpose, but the stock model doesn't.

The volume controls suck, change them for the sake of a few bucks, they look cheap anyway..

The Floyd Rose is actually a Floyd Rose and not one of the Ibanez Low-TRS fake Floyd Rose things or a "Floid Rowse" this is good, even though I hate them anyway, as it is better than the alternative.

This guitar has been banged around and it has a few "dings" "scrapes" and "scorps" but it's no worse for wear although I nearly urinated myself with horror when i saw that the laquer around the bolts that hold the nut on had "cracked" thankfully the wood was fine though.

Excellent guitar, It's my "first" guitar at the minute leaving my SG, Les Paul, Two other "lesser" RG's and Kramer in their cases. I don't want to give this guitar full marks because that makes this review seem pointless as "everyone gives their guitar 5 out of 5" if i could give it 98% i would but I can't so it's getting a 5.

This review was originally published on http://www.musicgearreview.com
Did you find this review helpful?yesno
»
Read the 12 user reviews on the Ibanez RG550 [1987-1994] »