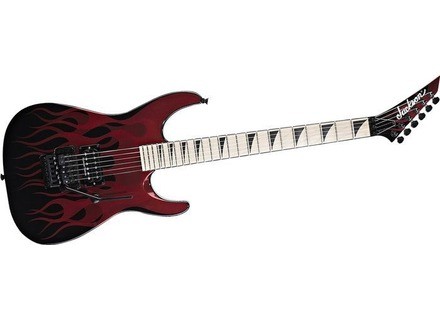 Jackson DK2M Dinky 1H Red Ghost Flames Limited Edition
4
This was a limited edition guitar that only a few stores got. It's a bit stripped down from the normal DK2M, so it was more polarizing than some of the other models. The guitar has the following specs:

The first thing you notice with this guitar is that it has a very nice paintjob. It's solid without any runs or odd overspray in smaller areas that people tend to miss. The guitar itself wasn't the lightest piece of alder I've ever encountered, but it wasn't too bad. The neck itself felt like any other Jackson neck, so those who have played them should feel right at home. The fretwork on this was pretty solid, but I never started adjusting the action and putting my tools on it to see how true the frets actually were. The floyd on this isn't the best in the world, but it's pretty much on par with the rest of the stuff in this price range.

This guitar has the Seymour Duncan JB installed in the bridge, and the guitar really ripped. When clean, it was a bit bright. Backing down on the volume knob and adjusting some settings helped get a decent clean sound, but don't expect anything too spectacular. The midgain tones were pretty cool with the volume knob down, but with it maxed, I found that the pickup was a bit too hot. However, the high gains are where this pickup really excels. It's totally ripping, and you can get some super sick 80s tones with this thing. The JB, despite its polarizing opinions, is a fairly solid pickup. I just really wish this had a neck pickup.

For the price, this is a great guitar. I'm not totally crazy about the finish as I think the red and the maple fretboard clash a bit, but the guitar sounds solid. If I were to keep it, I'd swap out the floyd with an original one, and everything should be pretty good after that. I still really miss the neck pickup, but I can't go on about that too much as it was designed for those who just want a bridge pickup.
Did you find this review helpful?yesno
»

Thunderbolt1480's review (This content has been automatically translated from French)

Super stick very cozy as the other series Dinky mapleneck.
Lighter because a single microphone and a single volume without tone or selector ...
Unlimited Access to the last boxes .... a marvel that handle!
Low action and very good intonation and a round of virtuosic technique and fast play (taping, sweeping ...)

A single microphone but it is a TB4 not too cold nor too typed metal ... it's still hot fat; incisive, accurate but not too much and especially it is very rock n roll (blues rock / hardcore / heavy metal / thrash)
I like this microphone, its output level is about right, lets get out of playing good crunch on the volume and with a good tube amp it does for the big blues.
But this guitar is first and foremost a guitar solo made for the exit facillement distortion.Les harmonics and guitar is no lack of bass so big sound.
Me I think she has more precision and sustain the key DK2 rosewood.Elle model seems a bit better finished and the neck with maple fingerboard is amazing for a Series "Japan"!
And then she got the look that kills 80's! I love the inverted head and the mic!
The flyod is very powerful and désacorde pas.Seul the volume knob seems a bit fragile and there are more gradual but it suits ....

_ Volume control means (lack of progressiveness and move a little on my model even after resserage)
prices a little higher than the standard model DK2M but it's a good series so .....( Limited € 899 in shops in France)
Versatile (1 micro)