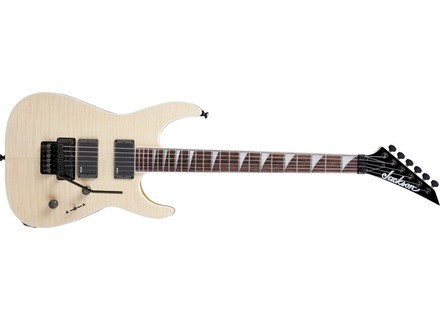 Jackson Super Light Soloist SLSXMG
4
The new Jackson X series is Giving players neck through construction for bolt on prices. These guitars are made overseas but have the same kind of construction that you would get on a USA model. This is one of the X series Soloist guitars. The Soloist is one of Jacksons most popular models so having a budget Soloist option with neck through construction should be a great seller for them. This is the natural model that has a flame maple veeneer on the basswood body. The neck is maple with neck through construction. The fretboard is rosewood with a compound radius design. It was a Floyd Rose style tremolo and a locking nut. The pickups in this guitar make it one of the better models in the X Series. This guitar comes with fully active EMG's. It has the EMG 81 and the EMG 85. Other X Series models have passive EMG's so you have to look out which model you are picking up. The controls are simple with a volume and tone with a 3 way blade switch.

With the neck through construction you get all the feel as if this was a USA made SL2 or something. With the neck through construction you get a super smooth feeling all the way up to the 24th fret. There is no big heel to get in your way or anything. With the compound radius fretboard you get a comfortable playability on both ends of the neck. Near the body the radius is flatter at about 16 inches. This means that you can get a lower action up there for faster playing and easier bends. Down near the headstock the radius is about 12 inches so it is a bit rounder so you can play chords more comfortably.

This guitar is one of the better X Series models because it comes with fully active EMG pickups, pickups you would find in guitars costing 3x as much. Because it comes with these active EMG's the basswood body is less noticable. EMG's are not very wood sensitive so essentially you are getting the same tone that you would get if you had a Custom Shop SL2 with EMG's. This guitar has the classic EMG 81/85 setup. The 81 is in the bridge. It has a high end razor sharp kind of sound. The 85 is a more versatile pickup but it is not as hardcore as the 81. The 85 has a warmer tone. It doesnt have as much high end. It has a smoother sound which is better for leads and better for clean tones.

Jackson Super Light Soloist SLSXMG
4
You don't see too many neck-thru guitars with these kinds of specs, and in my opinion, there's a reason for it. Jackson is reviving the X series guitars, and they're a bit of a mixed bag on certain things. The guitar features a basswood body with a maple veneer top, a maple neck-thru neck with a rosewood fretboard, 24 extra jumbo frets with sharkfin inlays, a licensed floyd rose bridge, two real EMG humbuckers, one volume, one tone and a three way switch.

The guitar is a neck-thru design guitar, so access to the upper frets is an absolute breeze. There's pretty much nothing at the higher register to get in the way, and reading that last fret is as easy as can be, really. The guitar had a decent weight that was right around the 7 lb mark, so while it's not exactly "super light" as they say, it's still a pretty light guitar. The frets on this were decent, and I was able to get some nice action with it. The bridge is one if the main weak points of this guitar. It's a licensed bridge that I'm not a huge fan of. One thing that was really annoying was that the arm wasn't perfectly tight in the cavity, even with it screwed down all the way.

The guitar itself is mostly maple thanks to its neck-thru design, but the wings are made out of alder. This is a somewhat odd combination of woods, but it's not too much of a big deal thanks to the EMGs installed in it. Before anyone starts, no, EMGs do not sound the same in every single guitar. However, they sound a lot more linear than other pickups in guitars, and I find they're more "compatible" than a passive might be. The guitar had an EMG 81/85 combo, and anybody who has played these knows they work out quite well for heavy metal. For other geners, they're a bit lacking, but for metal, they can do that melodeath/death metal sound with ease. They're compressed, tight and linear enough to get the job done for those who want that awesome grind you normally hear from actives.

The guitar is a pretty good guitar, and while the bridge isn't too bad, it's still something that I'd like to see changed up. The pickups in this are good enough to stand on their own, and there's no need to replace them. The guitars are also cheap enough to where you won't break the bank buying one of these, and you can have a pretty good "bang for your buck" guitar.
Did you find this review helpful?yesno
»