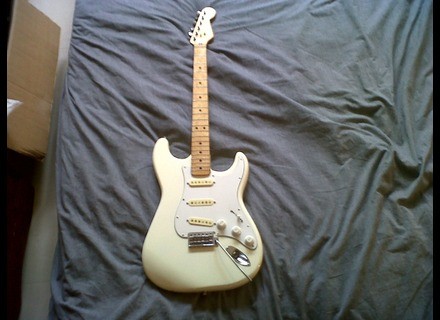 Paul Beuscher Stratocaster
3
(Originally written by deedz1978/translated from Audiofanzine FR)
Made in Japan a long time ago.

It was my first guitar. I bought it with a strange Mako amp more than 15 years ago and the guitar seemed to be already 10 years old!

I still play it at home because I like the neck quality. It became better each year! It allows you to play solos easily.

No surprises: the sound is awful because of the pickups...

It was a good first guitar in spite of the sound... I'm even thinking about upgrading the pickups...
Did you find this review helpful?yesno
»

-kc-'s review (This content has been automatically translated from French)

Level ergonomics and co, I focus not is a copy of Start 'everything is normal.
The jack is a bit borked, full of loose connection, but hey, the guitar is old, it's understandable why
Similarly, VCU mcaniques is already good, it's not the oil bath, and in addition some have lost their ring guidage.Mais it is rather good tuning!
The pickups also have much morflleur plastic is yellowed and the pads are rouillenfoncpt but they work!

I'm bassist, I use this guitar for fun on my bass amp 15w.
For me, it leaves very beautiful are clear, the saturations are also nice with a SansAmp GT2, but hey, on bass amp ...
it offers a fairly broad palette of sounds, according to rglages, these being rather ffective.
To play nirvana or something like that with a sound a bit "cra-cra" (single coil) i like

I even until dsaccord If p (with the strings that go all the same ...) and road maintenance ca XD. Well, of course, will not expect a play with it no, it's still a strat 'eh.

I scraped a recup the mouth of bread a few years ago, I knew nothing of it. I e-mailed Paul Beuscher for more info and voila I had the rponse:

"IT IS a guitar that we distribute in the 80's, it manufactures in Japan by silent Rokkoman. C 'silent an instrument of the violin between high-end Honorable .[...] should be quite a beginners if the column was straight. "

Well I'll add it rather aged well, the violin has not changed a bit.
I hsit replace mcaniques and microphones for a while, but in fact I love the vintage cot 100% natural.