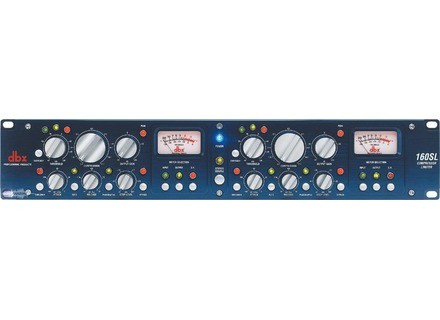 blackle's review (This content has been automatically translated from French)"Oh Dad! Have you seen the beautiful blue?"

dbx 160SL
5
The dbx 160 S is a stereo compressor could not be more complete consists of a multitude of rotary pots, buttons, LEDs, and two good old VU&#39;s backlit. Back face a series of buttons change the system output symmetrical asymmetrical cut with or without mass, with the possibility of setting up 1 point for a floating mass or making the chassis ground central point of the transformer chassis .. The connection is made via XLR course. Ditto for the inputs / outputs a control signal gain variation in its side chain (Side Chain).
Also note that the symmetry of output is through Jensen transformers capable of handling elephantine tensions.

There is thus a compressor with two separate channels but * connectable to one another. Here controls are conventional for a compressor. We find the threshold, ratio, attack the output gain and return. So classic .. priori not what "black page" .. DBX but did not stop there, also providing another command called "Stop Level." and behind it lies one of the "most" of this bike, namely a peak limiter and switchable two-step, called "Peak Stop Plus", a saving of evolution "Peak Stop" * which was already present on the venerable 165 A.

Classic Grand in DBX, the "Overeasy" function. This feature helps to soften the activation of the VCA to the trigger point, which resulted in making softer and more discreet compression. Here it is for you to choose. If you like big sounds at a very slow attack and snapping large transient time, it should under no circumstances activate this function, also called "Soft Knee" but remain "Hard Knee" (stiff elbow to stay Gauls).

An "Auto" button, as its name suggests, makes the detection process and the ongoing attack and release, automatic. This makes it much simpler to use and allows compressor work much more finesse, since the settings are changing constantly following the signal envelope, a pretty daunting thing to do manually. That said some artistic applications, in my opinion it can not be regarded as regrettable as it is sometimes useful to make the finest and most sophisticated manipulations by hand ..

The so-called "Side Chain" feature allows to introduce in the loop detection 160S bike as an external equalizer, turning eg a de-esser to compet ..

It should be noted that each key has its course sometimes bicolor LED signaling .. is pro ..

* The "Stereo Couple" button makes the left channel as master settings, which is always handy (and essential!) As soon as one has to manage a stereo pair, but ATTENTION, here it is a sum of two channels serving control, not only master channel.

Notion ** and explanations about this feature of "Peak Stop"

After compression, the signal can follow two paths. The first will pass through the "Peak Stop" system, the latter being controlled by the rotary knob "Stop Level" graduated from +4 dB to +30 dB. The lower level will not pass anything above 4, but if it is turned fully, it allows the device to release its nominal level of 30 dB, so the onboard limiter is disengaged .. you follow me? But after compressed and limited the signal, there is still, in this first case, the output gain knob to regain what was lost level dynamically. So here we are perfectly free to leave a cake, of course, but to +20 dB if the heart tells us. If by is pressed against the "Peak Stop Plus" button, the gain control output will be placed BEFORE the limiter, which means therefore, that we can not exceed the maximum level shown by the same knob "Stop Level" that I recall, graduated from +4 dB to +30 dB, and if you push too hard the output gain, we will face an insurmountable wall and, frankly, quite unsightly.
I think deserves mention, since nothing in the front of the bike this aspect explains this to say the least circuitry of the machine, and the instruction booklet is not about a clarity copy, and if you are using this compressor as any other model, pushing very hard gain after compression with the "Peak Stop Plus" button, you are likely to be disappointed by the strange mash you&#39;ll hear .. This posed with a little practice and a look at the lights on the facade of the 160S allows to navigate quickly ..

Mummm .. Finally, here we are in the thick of it .. I note here that the 160S is provided in the presence of 24 bit AD converter (dbx 704 X) option, capable of outputting a digital stream to AES / EBU standards and SP / DIF. We will come back later ..

Purely analog use, since its purchase, it was connected to a multitude of different sound sources, and the first thing that follows is that it shines not exemplary neutrality, especially in the "Overeasy" mode is engaged. The second observation is its ability "to eat" decibel easily and without reproach. Moreover, a continuous monitoring of the needle VU reduction indicator mode, is necessary as it can go without problem up to 30dB very easily and without any adverse effects ..
In contrast to "Hard Knee" mode, its action is logically less discreet, and you can easily reach the first sounds nice, but also quite fanciful and frankly little use as ridges flee everywhere. Okay .. but here the clipper "Peak Stop Plus", it is what then? Well to correct all these inconveniences manual mode, and just put it into action to get everything in order, except that the sound loses part of its appeal .. must choose ..

Used primarily on vocals, the 160S gives the best of himself, and at no time did we notice pumping or creating noise. The sound is nickel until the end of the last dB. With this compressor the major risk is to take you to extreme settings where extensive experience is required under penalty of making big mistakes.

Where the DBX is perfectly astonishing is used for purely creative, so its potential can be outstanding. Including playing time break: quick development of deep change sounds without distorting. This then becomes an exercise in breathtaking style.

Using the AES / EBU outputs the results are stunning, the stereo image is fully respected, the signal to noise ratio is the same. Maybe we can see a very slight tendency to "eat" a little low frequencies and boost the high frequencies .. but nothing nasty moreover well .. That said, another way of seeing things is to say that the analog outputs, they have tendency to increase a bit low frequencies while attenuating high, which would also be perfectly acceptable and probably more accurate ..

From a technical as well as artistic use, 160S this may seem a bit difficult to approach. Including manual operation (Overeasy triggered mode). There is a device on which you have to linger, test different settings and listen to the slightest deviation dB carefully and under conditions of optimal tracks .. otherwise you will be unable to use it fully, especially not hear his real qualities.

At first it is also imperative handled with tweezers, as mistakes can be made. And especially with the "Peak Stop Plus" feature, as it can be sharp and quickly wearing so badly mastered.
As with any high-end device it will also be inserted into an audio system that will fit him, coherent knowledge and same range.
This compressor has been tweaked through its taken by a specialist, which led to a great and professional tool. Congratulations Mr. DBX ..

dbx 160SL manuals and other files