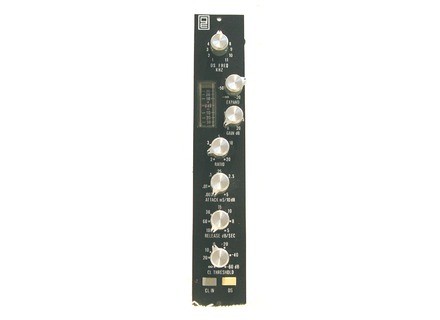 Quad Eight CL-22
5
The Quad Eight CL-22 is a compressor module that I believe is pulled from a console, although I'm not sure on which Quad Eight console it would be from. It's an analog piece of gear that doesn't have any connections of it's own and would be racked up in a custom case that would take care of that. I don't know if that's the case with all of them, but the pair of them that we've got at the studio where I work are in a custom case. It's not a rack mountable case, but of course that's going to vary.

The Quad Eight CL-22 definitely has a nice amount of parameters to work with for compressor. Included here are knobs for threshold, release, attack, ratio, gain, expand, and frequency. This is more than what you'll find on a typical compressor, which is nice to have in my opinion. No manual will be available for the CL-22.

The sound of the Quad Eight CL-22 is pretty aggressive in general, but the nice collection of parameters make it a flexible compressor. I love using this on drums as it's great for really getting a nice and tight sound. We've got a stereo pair of these in one of our smaller rooms at the studio to go along with our series of Quad Eight preamplifiers. I've used it on individual drums as well as in a stereo pair for overheads, which is probably my favorite use of these thus far. I'm definitely going to experiment with them more as time goes as they're fairly new to us at the studio as of now.

Good luck finding any Quad Eight CL-22's that are already racked out there. You may find some that have just been pulled out of a console, but they'll need to be custom racked which can certainly be a problem. If you do find some that are working out of the box, certainly check them out as they're great console compressors to have around. I don't know that the CL-22 would be worth seeking out and racking up yourself, however, as that'll costs a good amount of money and time...
Did you find this review helpful?yesno
»