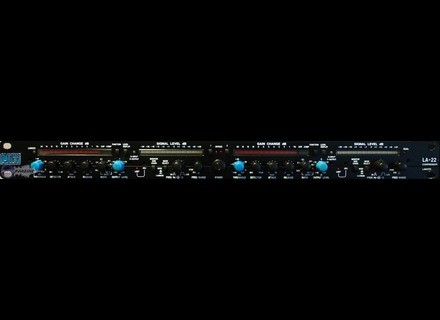 blackle's review (This content has been automatically translated from French)"Complete, powerful and professional .."

Urei / Jbl LA-22
4
The LA-22 is a compressor-limiter with two channels "American", ie it has at the rear of the terminal "Barrier Strips" * (see chapter use), with bars that can be modify the internal circuit configuration of treatments to suit its own needs or uses, in a fixed installation (studio), but also be able to enter and exit through the wiring to terminals.
Like all compressors on the market, the LA-22 days two main roles:

The compressor therefore, establishes a non-linear relationship between the input and the output level, so it is the gain of the channel in order to avoid excessive fluctuations in output level when the input varies .. He usually works on a wide range of frequencies.

As everyone knows, it is a safeguard. The limitation occurs when the signal level exceeds a preset threshold, a bit like an automatic hand intervened to turn a knob. Of course here the limiter operation is very fast (a few ĩS)

The LA-22 thus has two basic functions, which other functions and commands have been added ** (see chapter use).
Like all conventional compressor-limiters it is of course possible to transform this dual processor dynamic stereo compressor limiter. It is then clear that, in stereo mode, each compressor is associated with a channel. If both channels are independent, each answer to the demands of its channel, as the two do not exactly convey the same message, the ear placed at the outlet of the chain has been a shift close to that resulting from a pan control that we would turn from right to left and vice versa.
The coupling is done by either a suitable switch or by the "Barrier Strips" that can also be used for coupling several compressors. In this case, the control signal gain variation is the sum of the gain control voltages of all processors .. and the gain range of each processor in the same way.

Audio connection through very classic XLR, and as Urei is a professional manufacturer we enter and exit symmetrical .. Even better, the input is electronically balanced, ie active, the output is passive symmetry therefore transformer .. Royal ..

Although the LA-22 offers a lot of orders are use is very intuitive. Given this, if you start with compression-limiting and consort, you may still have interest to choose a simpler model .. Urei because this is not a "My First Compressor" if you know what I mean ..
For those familiar with this kind of gear do not really need an explanation of the commands .. or rather if: the compressor-limiter is basically a product whose gain is unity. It is transparent, except of course when the compression or the limitation occurs.
When working with a fairly regular compression, the ear perceives a lower level it is necessary to correct, it is the role of the output control .. classic .. and so far not rocket science .. both commands arch known attack and release change very classically response times of voltage controlled amplifier better known under the nickname of small "VCA" .. Brief move to something much more interesting, Urei incorporates an unusual selection command control mode "ADJ". This is a level adjustment allowed the peak detector used in the average detector being fixed values. This command is to be used depending on the type of signal processing and possible incidents on music. It is extremely effective.
A preset mode is switched by a switch located at the end of the race knob compression ratio "Ratio": compression ratio, ratio peak / average attack time and are then preset .. orders and controls on the front panel, except for the threshold setting "Threshold" and output level "Level Out" are then disengaged .. on the other hand careful anyway because the return time, depending on the frequency is shorter at high frequencies in order to reduce the distortion that is observed when the return time is too short compared to the period of the signal. .

* As seen above strips screw "Barrier Strips" you can change the mode selection work through small riders. In each mode the rider and his journey. In wideband mode, the signal passes through the source and joins the VCA output, a variant can be wired: detecting the buffer stage "Detector Buffer" not receiving the input signal from the parametric but one folder. Narrowband mode, the hand through the filter to the VCA for action on the level and will be remixed with himself before going to the output signal. With these strips screw it is possible to direct the control signal in the detection circuit and signal gain variation in two distinct loops. Is a loop with only two detectors, peak and RMS in this case all the front panel controls are disabled. An actual or less his entire collection of loop adjustment potentiometers are active.


Urei ** If called his bike compressor-limiter that does not prevent to ensure among other things those Expander and De-Esser. There, a little explanation is needed. The LA-22 incorporates a tunable selective circuit which is installed on the signal as well as its side chain, the signal detection "Side Chain". This circuit is a filter similar to a parametric equalizer "Band Pass", whose center frequency is given over three decades (X1, X10, X1000) and thus covers a frequency range from 20Hz to 20kHz and three ranges . The selectivity of the filter is set by a potentiometer called "FreQ" between around one tenth octave and two octaves (the ladle). To help settle a small bump button switches through the filter to the output signal. It is used to control the compression or expansion from a previously selected signal. In this mode, you can change only a fraction of the spectrum, still retaining its original dynamic, is what can be called a dynamic correction ..

We can use the LA-22 to reduce plosives, the phonemes that make infamous "pop" into a microphone.
Harnessing the LA-22 as eliminator wheezing (whistling exterminator), better known as the de-esser.
But also to create special effects, because even if these applications are valid for speech and singing, they are also valid for the music .. It should be noted, however, that the variation of maximum gain allowed by the LA-22 is 20 dB at the base is not an effects generator ..

If you are looking for a dynamic processor with the "colorful" compression go your way immediately .. the LA-22 mode compressor remains whatever settings foremost compressor said transparent. The most amazing thing in the story is its ability to remain discreet whatever the settings, except of course the drop in dynamic .. It adds no audible coloration and even less distortion ..
Broadband mode, it was nice to push the threshold settings and rates, low pumping effect and streaking is a note. No molasses in the low frequencies .. no adverse effect at high frequencies ..
Narrowband mode, the LA-22 is capable of transforming itself into a dynamic filter first choice. Function-Esser is a model of its kind. Compression is always pleasant and without adverse effect. And as long as one is aware that at the base it was not designed for it (remember the maximum gain is 20 dB, but in most cases this may be sufficient) it is also able to transform into a real terribly effective frequency dynamic filter ..
In expander not much to complain about dynamic mode, it does its job more than adequately, however it can not substitute for a dedicated bike.
In contrast, the peak limiting (in automatic mode without any possible settings) in my opinion is his weak point, paradoxically, the peak detector plays too fast on signal <1 s which is certainly a good performance, but remains too fast because leaving absolutely no attack .. I would much rather a limitation say .. more progressive .. then effectively prevents kidney switch to manual mode (Barrier Strips return) in order to receive a more realistic minimum time attack (100 ĩS, which is still a big difference), but in this case, farewell compressor .. In short, If you also need a limiter in your processing chain choose either another bike .. or more dedicated limiter ..

Dynamics processor unfortunately little known and yet offer enough attractive opportunities that will limit the imagination of everyone .. It is above all else a craft studio, but it may very well find its place on stage alongside all musicians. These applications are valid for voice, instruments, indeed it is extremely versatile. Technicians will certainly appreciate its performance. While the musicians enjoy are creative side (see Recreation), they will remain more than to create special effects ..
Very good bike but with time by this nagging feeling that is a fact, not be able to chain a control signal gain variation from one channel to another, as does, for example a Bss DPR 402 .. in other words, the inability to see two three different treatments simultaneously, spread over the two channels of the LA-22. This is particularly annoying .. and can be problematic in some cases. Despite this limitation (no pun intended) voluntary priori, compressor-limiter offers performance (very) high level. It is a professional design, and it has nothing to do with small compressors tend moultes home studio. It also offers traditional features, a selective mode and does not require a connection in the chain of command, which is also physically absent. Restriction? Yes and no, because what we lose a point of view on the potential gains in simplicity ..