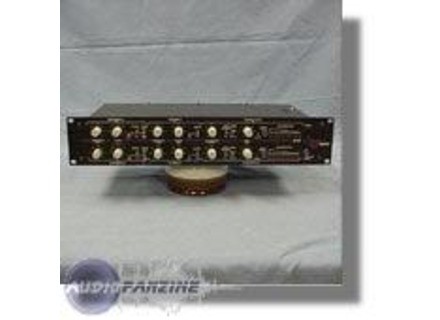 Robin Schneider's review (This content has been automatically translated from French)"Excellent sharp machine."

XLR inputs and outputs, including entries in Key (or sidechain). Only the entry "VCA In" jack is on and apparently used to control the VCA directly with an expression pedal. I would love some clarification on this feature.

It is a device whose production has ceased in the late 80s. It was manufactured in the U.S. with standard audio components. The person who sold it to me even told me that these components are still used today by SSL for example.

The unit is well built, access to components is relatively simple for maintenance, knowing he did not need too.

This is the upscale version of the famous Dynamite the same manufacturer.


I never had the manual handy, I just found the time brochure on the net.

The Valley Audio 610 has two linkable channels with three sections.

The first section is reserved for the compressor with threshold, ratio and attack time.
The first thing that strikes you is that we are dealing with one of the world&#39;s fastest compressor with three extremely short attack time: 20 microseconds, 1ms or 10ms. It is therefore in the velocity of a 1176, but losing less serious and with a pumping easier to master. Needless to say we did not deal with a bike with soft sounds and I highly recommend to take on voices or strings, for example, even with a low ratio.

The threshold ranges from -40 to 20 dBV allowing drastic cutbacks.
The ratio ranges from 1:1 to 60:1 can thus easily make a limiter.

All with automatic makeup gain in addition to makeup manual gain VCA section (I&#39;ll get to later).

The compressor also features a fashion voice over dedicated broadcast, the ratio falls a range. As soon as the source in the sidechain input exceeds the threshold, the sound is decreased by XDB. Very convenient for a webradio for example where the bus voices can compress music 15dB for example when you talk.
This range is from 0 to 60dB which can also help transform the 610 duck gate (the sound cuts in excess of the threshold). Note that this mode only works with a sidechain signal.

a simple setup for using this system:
you want to put a big delay on the guitar but you do not want to hear that between the notes and not during the game? Tuck your back in time 610 and the guitar without effect in the "Key" input.
Set the threshold for that sound cuts when the guitar plays, and return when it no longer plays. Thus, the guitarist is not blurred by time, except at the end of a sentence where the time reappears.
The difference with a simple automation of the? The delay does appear at the end of the guitar solo, but it will sound as if it was active throughout, which opens the way for creative effects.

Then comes the expander / gate section with the threshold (-40 to 20 dBV) and range (0 to -60), and finally the ratio, with 1:2 mode expander and gate way to 1:20. Both modes have a very short time and apparently fixed attack (I have not checked if the attack time of the comp applies to gate).

The last section is called VCA and serves primarily to adjust the overall Release, because the 610 has a VCA for both sections. This release can be manual (0.05 to 5 seconds to 20dB) or automatic (auto mode works very well indeed).

The release also provides two modes of operation, normal mode, the FM mode (which I am unable to explain) and the external mode to match the use of VAC input.

Finally comes the manual gain from -15 to +15 dB. This may seem little, but it is in addition to the automatic gain section of the comp. Besides, if you use the attack 10ms time on percussion or bass with a pick, you will be surprised to use often in mitigation, because the automatic gain ignores the attack time, which can expand the transitional and put you in the red. However, no problem with a 1ms attack time, you can leave the gain to 0 without worrying about the clipping.


This compressor gate is not very versatile and I recommend to a beginner can buy his first hardware compressor.

Niche: crush, distort and give balls. 1176 VCA could say.
It reacts very accurately to changes in level, we are in efficiency rather than musicality, which I think betrays more than music oriented Broadcast studio use.

Clearly, if your sound is soft, not dynamic enough, or lack of character, you can revitalize it with no problems.

The best use is to my mind in parallel compression where you can have fun making a little extreme settings and mix it with the original sound to thicken all.

The attack time of 10ms can pass the first peak which can highlight a snare hit or curing a bass playing fingers. This is also one of my favorite uses, with a relatively low ratio and a quick release, attacks fingers are highlighted but the harmonics are maintained and inflated by compression (6dB usually sufficient). This made it almost reminds me of a bass amp.

I use a lot on the battery parallel bus is a pure delight.

I use it regularly in making and mixing a few months.

Audio Valley is without doubt the most honest and most brutal of all, very accurate with a strong personality.
It provides a single grain of it deals with virtually no pump in the bass which makes it an ideal compressor for the bass and kick drum. No need to put on a low cut sidechain.

Shared between the Gate and VCA comp can be confusing, it can create artifacts when the ratios are close.
It must also be careful when dealing with some sources as the automatic gain can significantly raise the breath of origin (even if the machine itself is not blowing almost).

I got it for $ 500 with a great Parisian studio, and I&#39;m not disappointed with my purchase. This is an excellent addition to my other hardware compressors. I even use it sometimes as a result of my Neve II porticos whose compression is very slow (20ms attack at least twice the maximum of the Valley!) As a final example limiter.

It has become an essential part of my studio and probably my favorite hardware compressor because I know exactly what I&#39;ll get by plugging.


14 of 14 people found this review helpful

bb dreamer's review (This content has been automatically translated from French)

Valley Audio 610 Compressor
5
610 The valley is a dual mono compressor expander vintage, flagship of the firm's US Valley People, frankly not that great in terms of design but it is against the indoor engine of a Ferrari!

Never heard of a compressor with a punch like!

The least we can say is that it is amazing on drum loops, capable of the most drastic cuts (imagine the result with a ratio of 60:1, the gate and release a ultra-short ... ), it hits hard, dry smack home drive, a potato hallucinating! by the way, this comp does not eats low frequencies even high compression ratio.

The IDAL comp for those seeking the sound that knocks!