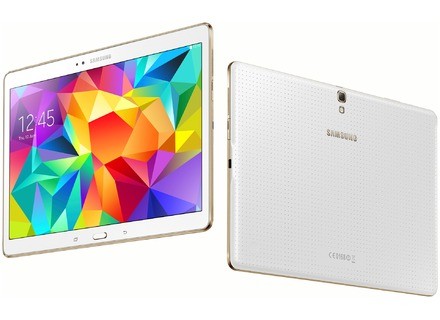 This tablet is at the level of the best Android tablets and should soon compete last Ipad. The main advantage remains open to other systems, the ability to expand the memory

This tablet is in the high end and is very efficient, see higher in some areas, the latest Ipad

Very fast and very complete with multimedia functions.
Only Samsung's TouchWiz overlay is not a special interest.

According to my initial tests, the tablet can recognize many audio interfaces. The problem of latency inherent in Android is on its way out and should allow the arrival of new developers
Some audio sequencers already work very well but to date, the supply of the Apps store in terms of audio applications remains significantly higher, excluding dedicated to ipad interfaces.

It is hoped that some manufacturers are developing dedicated to this kind of tablet interfaces. This should not take long. See article: https://fr.audiofanzine.com/samsung/news/a.play,n.26826.html

Many applications such as Ireal pro, Caustic, Audio Evolution Mobile DAW and many others allow you to work the music, waiting for the arrival of equivalent sequencers Garage Band or Cubasis under Android.

I use it in addition to my PC. This tablet is very effective in the multimedia field, but does not replace even a real workstation dedicated to musical creation.

I use it for two weeks and then I am satisfied.

In the field of musical creation, I was quite tempted by the iPad but the IOS system, too closed, I was disgusted.
The price of the Tab S is still too high but should quickly become democratic.

The iPad is still a top tool for musicians but hopefully the arrival of more comprehensive sequencers.

For further professional productions and we are still far from the PC or MAC but for small stations nomads, the future looks bright.

I will complete my review as soon as possible.