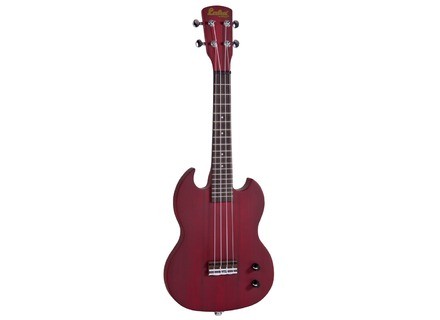 VUVS6, Ukulele from Laka by Vintage.

Laka by Vintage VUVS6
5
It’s made in China and this one is branded Laka by the JHS distribution co. (I have seen them on sale elsewhere with different branding and I think the actual maker is Nanjing Aileen Trading Co) . Mine came in the “transparent” (you can see some of the wood grain through it) red satin finish. I have seen them in solid gloss black but the red is much more common and I actually wanted the red as it is quite a close match to the colour of my friend Charlie's Gibson SG Guitar. The finish itself is very nicely applied with no misses, smears, dribbles or inconsistency in its transparency. This even extends to the very nicely matched and pretty well fitted plate on the back covering the electrics. Since it does cover everything I’ll take JHS’s word that it is all solid mahogany and from the look of it all made from one piece with no sign of a bolt on neck or any other join, though they have done such a good job with the fretboard, (which may be rosewood but is certainly stained to look darker), hiding the joins. I could be missing something? Continuing on the fretboard, it is 18 frets long meeting the body on the 16th and with top and, (right hand), side circular markers at 5, 7 10 and 12. The markers are all inlaid MOP like plastic not just paint and the frets themselves are smooth and reasonably dressed. The nut and saddle are plastic and the bridge is rosewood in a tie around design with a decorative stained plate on the top. The tuners are all chrome, even the buttons, sealed and work very smoothly. Dimensions are a 38cm (15 in) Concert scale with a neck width of 3.6cm at the nut and 4.4cm at the twelfth fret. I’m not going to give measurements for everything but it is all well proportioned around its Concert scale and of course, as a solid body Ukulele it is very thin at a fraction under 3cm at its widest point. The active electrics all work well, possibly too well as they are very sensitive and turning the volume up does make it distort a bit or at least give percussive string noises. The tone control doesn't make much difference though and the fittings are OK without being spectacular, I think the plastic parts for the electrics are, without being specifically bad or cheap, the least attractive part of the finish, (followed by the rather ineffectual logo on the headstock, black on darkish red makes it look more like a smear from a distance). There is plenty of natural sustain and the intonation is very, very good, all the way up to the 18th fret, particularly for a non-compensated bridge, it also has quite a good and loud unamplified sound for a solid body (possibly why the electrics are prone to distort?)

It is a very nice Ukulele to play, the neck is very smooth and to my mind about perfectly proportioned in both width and radius The frets are smooth, rattle free and work very well, though they probably could have done with a final fitting. The action is spot on (though has it is suppose to be an ex demo model there may have been some after sale set up?) and it has sufficient un amplified volume to make it a good choice for quiet practice. Amped up it’s a bit trickier finding the right setting to give a nice non distorted sound. It’s even tricky when you want distortion and its easy to over distort, especially when the level of distortion increases the harder you hit the strings (the issue does lessen with a flatter battery, but that’s a tricky balancing act too)

As a gigging instrument you would need a good sound guy – and probably a heavy metal set, but what else are you going to play on this shape of Ukulele? – but it’s certainly solid enough for gigs. I think it will last pretty well, the translucent finish looks delicate but that’s just a look, I've had mine a few months now and it doesn't seem to mark easily, and everything else is rock solid (the plastic work is a little unattractive not flimsy) - and it came with a better than average gig bag too! (but I mustn't talk about gig bags)

Would I get another if I lost this one? Almost certainly, I like the shape and it’s as good as any solid body Ukulele I have played (apart from being prone to distort when amplified, but I don’t amplify it often and its very nice for quiet practice). If Ukulele corner was destroyed in a small (and very focused) nuclear accident It would kind of be in the top 5 to get again as I would want a nylon strung solid and I can’t think of anything I've played that is any better (The Risa Stick sounds better amplified but isn't a nice to play) but there are a couple of others that would equally fit the bill.
Did you find this review helpful?yesno
»

See all 6 photos of Laka by Vintage VUVS6 »