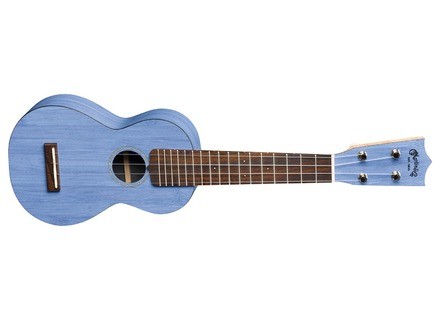 Martin & Co 0X Uke Bamboo
5
When I first saw one of these I thought it was some kind of fake. A coloured Martin! And in red, green or blue!! Surely that should be "Martin Smith" or something? Surely they can't be faking the logo that much again? Surely something odd?!? Anyway I checked it out and it is legit! One of Martin's 2015 special limited editions is in the 0X series and is a laminate Soprano in three colours and made of Bamboo, (Bamboo is always laminate you don't get strips big enough to make anything from a single strip; but the technology is well proven and as a material it has very "green" sustainable credentials). Colour is a bit of a departure for Martin but they had already broken the laminate taboo for the Martin 0XK so why not?

So Martin are doing a Budget(?! ~ only for Martin would you call it budget), colourful Soprano! Now I'm a sucker for colourful Sopranos, (along with many other things), so I wondered how much? After all it's very different from the normal Martins, it's a limited edition so production will stop soon, and like the old Martin Backpacker Ukuleles, which were very "different" at the time, and they are now unavailable, have become something of a cult Ukulele, I predict this one is likely to too in a few years.

Like I say, how much? I had trouble tracking one down in Europe. My usual places didn't have them but I found a top end eBay shop in Germany advertising them with a Buy it now / make an offer for the blue or green. As I hinted earlier though, it wasn't cheap but I thought I would put a very cheeky offer in on the blue one; at least I tried...
And, (and I'll remember how much under the asking price I went because they are a high end supplier so I may try again now as), my offer was accepted!

Now it's here and it doesn't smell (Bamboo Ukuleles I have encountered previously had a strong glue smell). It does sound good though; and it's very blue. Certainly not your traditional Martin but it is quality and I'm even more sure it will become a classic one day
Did you find this review helpful?yesno
»