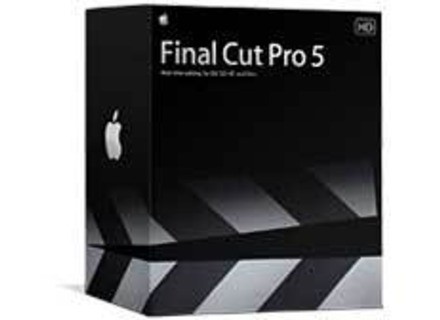 Apple Final Cut Pro 5
4
With Apple final Cut Pro 5 you can turn your vision into a reality with this software. This software is top of the line when it comes to video editing. It can compare with all of the Adobe Suites and it is superior to sony vegas editing software. But this can only be run on Mac computers so if you are running windows and you have a pc don’t think about getting this software I am not 100 percent sure but I don’t think it will run properly on your system. Final Cut pro is a top choice of professional editors and for the hobbyist that edit home videos in the privacy of there own home. It delivers high performance in digital nonlinear editing and native support for virtually and video format that is on the market. Final Cut Pro 5 gives you more creative options and technical control over your videos. With the support for all of your video formats including hd. Also when you edit you can convert videos into another format and the great thing is that it keeps your old format on file just in case. Look at it like an automatic save function, which is something we all need to have.
Final Cut Pro 5 is built for speed and has amazing real time multi stream effects. It supports real time effects and processing on everything from DV to fully uncompressed HD high quality videos that you import into the program. You can group up to 128 sources together into multi clips, then add or subtract cameras at any time for max flexibility.

Not to mention the capabilities that you have with the audio for your videos. This is the part I like the most, because apple understands that when making videos it is just as important to have high quality audio coming out. Most other programs don’t take much time into creating applications for editing your audio to its fullest extent. When I was running sony vegas, I had to use my pro tools to do all of my audio editing and equine because that program couldn’t handle it. Final Cut Pro 5 is the way to go.

Apple Final Cut Pro 5
5
I've been using Apple Final Cut Pro 5 for about four years and have found it to be a great piece of software for editing videos, and is probably the best software of its type that I have used. I use this to edit together short films - usually live music videos, and it works great for this type of use. While it takes a little while to learn all the ins and outs of Final Cut Pro, as it is a very in depth program, everything is set up smartly and as conveniently as possible. It has the capabilities to edit together videos in a non-linear fashion and also has a wide array of effects and options for making your videos look exactly how you envision them to. I am currently running Apple Final Cut Pro 5 on a Mac Book Pro that has a 2.2 Ghz Intel Core 2 Duo processor and 4 GB of RAM. I have also ran this software on a few other Mac computers - both a G4 and G5. While it runs best on the Apple G5, it works well on the Mac Book Pro as well. However, on a G4, it is limited in its use as it can only handle so much. Apple Final Cut Pro 5 is one of the most used video editors out there, used by both amateurs and professionals alike. It is truly a piece of powerful software and has endless uses. The price of Apple Final Cut Pro 5 is reasonable, but if you are just starting out you are probably better off picking up the cheaper Express version to start off with. Final Cut is a great piece of software and it has allowed anyone with a computer powerful enough to turn their computer into a powerful video editor.
Did you find this review helpful?yesno
»

Published on 04/12/08
Apple has released Pro Applications Update 2008-01. This update improves reliability for Apple's professional applications and is recommended for all users of Final Cut Studio, Final Cut Server, Log…