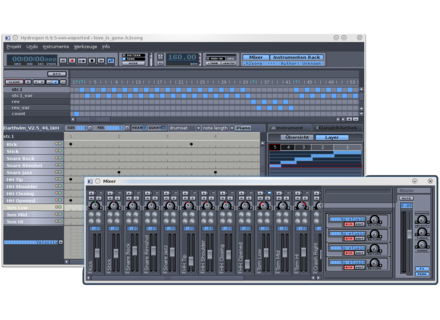 Hydrogen Music Hydrogen v0.9.6
5
Creative software standalone battery installation and
quick and easy thanks to an explanation video handling.
No samples all made here. It is the excretion.
Kits are available (trash, death, vintage ...) from
which it created its own rhythms, fills and songs.
You can create your own kits with the proposed elements
in each kit and other import downloaded or saved.
So you can have the best sounds in the world you want:
Gross battery or sound with microphones, compression and eq.

Works very well with Windows 7.
Some bugs by changing kits
but never recording.

Hydrogen Music Hydrogen v0.9.6
5
Easy installation under Windows 8.1 although this is still a beta version; This original sub ubuntustudio FEDORA CCRMA, Tangostudio or KXstudio in the stable version Linux, but the update is there: Linux, 0.9.6 is stable since August 2014.
General configuration easy: to change anything in Windows, use Jack Linux.
Incompatibilities: not really, but to make a multitrack output on Windows, it is not yet that ... Jack Windows refers to ASIO4ALL, not multitrack sound card but super strong. Otherwise, works well.
The manual, tutorials and videos have evolved and it's not bad, I found the answer to some of my questions. It's clear, that's enough for routine use or advanced, if one builds his drumkits for example.

Samsung Notebook, Intel Pentium B970 CPU (2.30 GHz) 4GB under Windows 8.1 X64.
Before, in beta, SONY VAIO 4GB and RME Fireface UCX USB, no problem either.
Hydrogen working properly, no crash, regular rhythms as far as I can tell. At the same time, it's not that Hydrogen will put the mess in the resource system to me it seems it is only a box advanced to the sequencer rhythms.

I use older versions from 4-5 years and the 0.9.6 beta for about 8 months. She already worked.
I did not buy anything before downloading Hydrogen, and I have not really used READRUMS either, that I could see as a competitor since I use mainly as REAPER STAN / DAW.
I like to be making a multitrack export, one per instrument (or a stereo instrument!) Without going through tedious maneuvers: we do export and multi-hop, a wav file for each instrument! (Under windows). However, there is a problem with the return of the multi export forum HYDROGEN (repisse the effects I think).
Obviously, Linux, one can make a direct export in multitrack sequencer such ARDOUR or QTRAKTOR, to Jack.
In addition, the piano roll to view and therefore play its parts percussion midi directly more easily and save them directly, even then refine them through the quantization function, or conversely from pieces quantizés can be added swing and pseudorandom hits (velocity) or speed.
I have still not found on the other hand how to insert measures might have forgotten in the midst of his piece, but at least I know now select whatever is right to move further to the right, and so make room the measure (s) missing (s).
Value is nirvana: no better than free.
With experience, I would do this choice because, not being a drummer, I can not consider buying an expensive thing then my results are just correct.

Hydrogen Music Hydrogen v0.9.6
4
Installed without problems on Mac OSX and PC Win7
The config is simple but complete for a freeware (editions Mix)
No inconsistency so far.

Use for several months, very useful for writing drum parts for composer / maqueter,
quality sounds correct (freeware) and many downloadable kits via software, export to WAV and Midi.

+ Easy to use for composing, many kits, flexibility and functions sufficient editions.
- Quality sounds ok but not comparable with Addictive Drums, BFD or Superior ... not function vst only standalone

I tried several software / plugins virtual drums, freeware, except DrumicA (Kontakt) and ReaDrums (Reaper), this is my favorite but the others are vst. Too bad we can not integrate into a Daw.