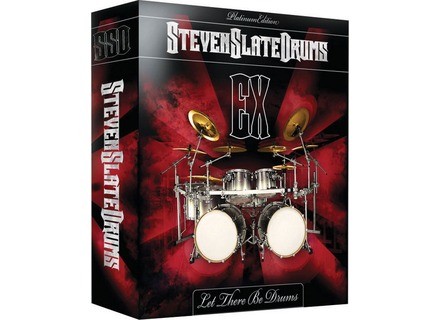 Steven Slate Drums EX Edition
5
The download is a bit long. About 4GB of SSD from the server which seems a little out of breath.

Installation is very simple. We install setup. It will copy the "library" on an external drive as fast as advocated in the manual. It saves our product via the Native Service Center.

Because yes, SSD is used (to date) through Native Instruments Kontakt Player [freeware]. So I use with Kontakt Player 4.0 and I encountered no inconsistency. I work on Windows 7 and under Ableton Live 8.

My config is a little old hat, but the app is not greedy via Kontakt Player. Access is a bit long to load a set but nothing inhuman either.

I use it for one week only but I fell in love. I must say that I already was before.

Having heard the demos on the official website http://stevenslatedrums.com/ you quickly understand that this is the best drum samples on the market.

One thing is very surprising: SSD is not very known in France. I worked previously with Addictive Drums. I've tested Superior Drummer 2 in a colleague, but honestly SSD leaves overhead.

I pre-purchased this app for all the snares. These are the best. The snares of Addictive Drums are too bland, too bright with no real dynamic capability. Those of SSDs are just perfect.

In addition, a huge advantage to launch this app via Kontakt Player is that it is very easy to superimpose several snares (for example) in parallel! Something almost impossible with AD (or too time-consuming and CPU-intensive since it requires 2 instances of AD at the time).

The kicks are very good too, hit-hat and toms also excellent (better than ADS).

A downside, however for the cymbals that sound a little too "cheap" for my taste.

In the end I use in my arrangements SSD (the snare # 5 is just delicious) and I couple to AD just for the cymbals.

Pros:
- The quality of samples (see method of recording studio on site)
- The snare!
- The ability to modulate freely in Kontakt Player
- Sets the basic
- The set "Old Led Zep" will be appreciated by fans of the genre
- Rolling on the snare
- The reverbs integrated

The official forum is very lively and you will find a lot of info and help, if you're speaking of course.

In conclusion, it has to be done here in samples of exceptional quality for a given pro! This is not a "toy" as his colleagues Addictive Drums (quoiqu'AD is perhaps the least worst among all the rest) or soft so cheap Toontrack (Superior Drummer is a joke in my opinion).