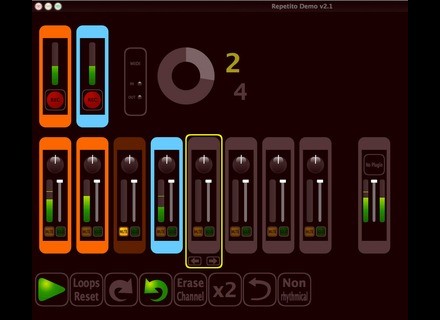 jetoh's review (This content has been automatically translated from French)" The Best! Thank you Mr. PAVAGEAU class!"

Repetito Repetito Demo
5
the demo version is downloadable from the site Repetito, the file is opened (zip memory) and executed and the interface appears by magic. It is simple and fast.
attention to what your sound card is properly installed and the asio selection because only the asio is recognized by Repetito.
manual posted is very clear with sample config pedal noon. In this regard assign commands is a breeze, Ctrl + command that you want to assign and it only remains to support the pad selected. It's done! we just start the adventure.
An important point availability designer for any installation bp is not in boss that you have service! small point that is important.

Use on laptop, 1GB ram windows.
because Repetito takes very little resources, I think even on an old typewriter he would be able to give us the loop

The software works perfectly and is very responsive, no latency observed

I look forward to my hand completely on the demo version to upgrade to pro. Thanks again to Mathieu Pavageau to afford a free looper bury all other pedals and loopers supposedly dedicated to creating. Here no such thing, there are no limits, only your creativity will not default the software. As a multi each recorded track can be treated individually (mute / solo), the loop can be doubled, quadrupled, etc ... allowing outrageous fantasies, no other looper permits. drum loops, arrhythmic are possible. This is the only looper that allows more than just another repeated endlessly loop, and that really gets boring for the audience ... with Repetito you made the real composition.
For the record, I pass all my loop pedals to Emmaus, I think this is the only thing to do

it sure is a small pedal in a pedalboard it takes up less space than having a pc next to you, except that the pedal is useless! I tried everything and I abandoned the idea of ​​ever having a looper capable of such opportunities. I was wrong, now I use it and it is a treat!
Also thank you to Mr. Nosfell great master of loop and his meeting with the designer Mathieu Pavageau which allowed such an embodiment. I only have two words CLASS!

miquetmousse's review (This content has been automatically translated from French)" Excellent! A true playground .."

Repetito Repetito Demo
5
Everything is simple and hassle free.
Not rocket science, installation, activation, configuration ...
If ever a book is available and explains everything in detail.
In the pro version the possibilities are extensive and the manual is an invaluable tool to understand all the possibilities.

Running on Macbook Pro 2009, core2duo 2.4, 8G ram. UCX RME soundcard. Also tested with Motu.
It runs superbly. Depending on the sound card down into little tiny latencies.
I had a small problem after switching to OSX 10.8. Contact by email fast solution found. Impeccable. That happiness compared to large companies where contact is difficult or impossible.

I speak of the PRO version:
Finally a looper that is a true playground for the ultra simple complete. Super stable, sound quality nickel, very configurable, everything is controllable via MIDI.
I tried a bit of everything that exists in looper, especially those without quantization and finally I found. Play opportunities are enormous. Sky is the limit.
After each according to his preferences and playing style approach is sought to work in the looper. In my case I waited long Repetito.
The interface is designed to be seen from afar. And yes, Repetito can be used by two people at the same time, each with up to six independent audio inputs (depending on the sound card of course). We can place the computer qque hand on stage or in a room so that the two "players" have a visual feedback, even qque meters. It is very very strong! And each may have several inputs (voice, beats, synths ...). It also is very strong!
Sessions can be exported multitrack (if 8 loops then 8 tracks sound files) to beings or other mixed afterwards.
The sessions can also be saved, rappellées later, and organized in a predefined order. This helps prepare Complete set with base pieces (we may recall via MIDI without touching the computer) to replay over without having to build every time.
Anyway, still a lot of things ... as the possibility of going out on eight different tracks, and therefore be mixed live on a 8-track mixer (as has been done Nosfell).

Saint Grawal's review (This content has been automatically translated from French)

Repetito Repetito Demo
5
Installation hyper as you have to unzip a single executable that weighs about 200 kilobytes ...
The setup is relatively simple and although a tad austere interface you'll quickly get the knack for assigning the command of his choice.
Once that is done it does not return.
It is essential to have an ASIO card (even if with asio4all can still get by) and the better the card, the better rendering.

My computer is a laptop core 2 duo 2ghz something like that 3GB of RAM ... It runs without problem knowing that this app uses a processor.
It is very stable and I have not managed to crash the app (well, I forgot to plug the power supply of the computer, and after rebooting Repetito resumed where it left off .. .).
I managed to run on an Asus EEEPC Repetito base (Windows XP) with a little wider buffers, despite the visual interface that is too big for the screen (it should go on the new ones) is s 'comes out.

I use a lot the loopers on stage and I had in my possession anything that could be done in Hard (Headrush at the Repeater via the boomerang, the RC20 ...) and some apps (Live.. .). I confess that I was desperate to find software that does that make a nice loop without quantization, unadorned or with a waffle and the best sound quality, all adapted for use without hands (I'm playing guitar). I started to give me a hand on the free version which I speak here, but I have been passed to the pro version and there ... pfffff is a fighter but this is not our purpose.
The free version is fully usable, stable, and music. It's very Instict to use and is customizable especially in terms of orders.
Eight tracks (mono) is more than sufficient for most common applications knowing that on each, the overdubs are unlimited.
The graphical interface is a bit strange and does not follow the usual topology of our DAW. However the software has great charm as well and after half an hour they had forgotten this detail.
Repetito can be criticized for not offering backup (this is possible with the pro version), or reload loops that has been prepared at home but it is the philosophy of the software to be thought to live and the total creation. Other apps like Live do that very well and yet are unable to be as easy to use and music that Repetito. I am absolutely convinced, I suggest you try it for free anyway.