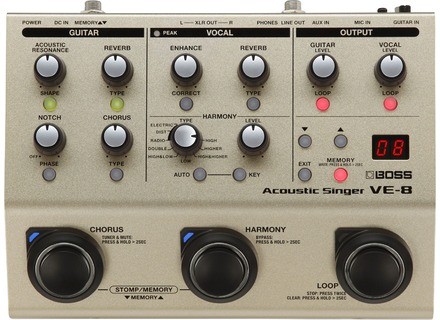 Boss introduces the VE-8, presented as the complete solution for singing guitarists.

According to Boss, the VE-8 was designed to make it easy to get professional-sounding vocal sounds right away by just plugging your mic into the XLR input and dialing up some nice ambience, adding clarity and control with the Enhance feature, and more. Hard-tuned electronic voice sounds, distortion, and radio voice tones are also included, allowing to bring some modern edge to your acoustic performances. It also features an automatic harmony function that detects the chords and key you play with your guitar, then generates the correct harmony as you sing. Hybrid and fixed harmony modes are available too as well as a doubling effect, providing versatility for different performing and recording situations.

The VE-8’s features a dedicated guitar channel. The Acoustic Resonance setting claims to magically restore your natural guitar sound, eliminating the sterile piezo “quack” that plagues typical undersaddle pickups used in plugged-in acoustics. Reverb and chorus are on hand too, plus Boss effects like Octave, Mod Delay, and more. There’s also a built-in tuner. The phase switch and notch filter provide fingertip access for killing any feedback issues the instant they arise.

The VE-8’s rear panel has a guitar input and XLR mic input with switchable phantom power, plus an Aux input to connect a smartphone or other device for backing music. Stereo XLR balanced outputs provide a direct feed to the house PA, while stereo 1/4-inch outputs let you send a separate signal to stage monitors or an acoustic amp. Both the vocal and guitar channels feature a three-band EQ and low-cut filter for shaping the tone to suit the venue, and it’s also possible to send the two channels to separate outputs for external mixing flexibility. The VE-8 can also be used as a USB direct recording interface with your favorite DAW software. A looper function is also included, as well as a preset bank where up to 50 presets can be stored. 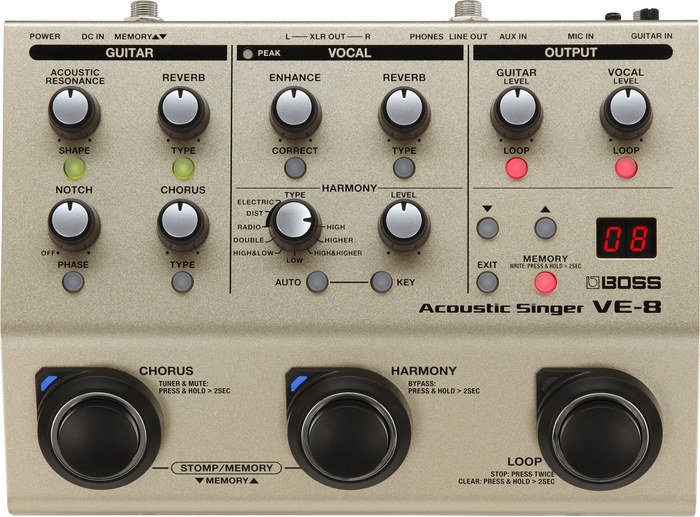