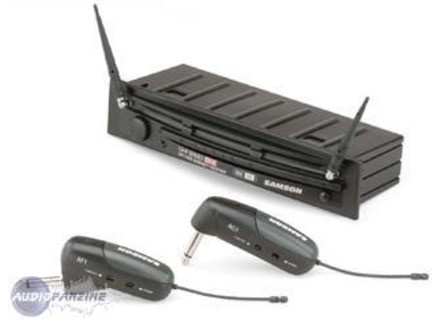 The system consists of a transmitter (plugue is directly on the guitar and a receiver) (I half-rack version).

The controls on the receiver: a general gain and squelch (sort of noise gate, comlete ineficace!) - An output jack or XLR 6.5 classic with attenuation of the signal as possible. A GIANT lead to give the state of the received signal.
The controls on the transmitter: an attenuation of + / - 15 db depending on the power of the guitar, a microphone switch on / off and tmoin lead to the battery.

The system technologically damn well (two antennas that go on the relay signal when the two will not pick up more).
Ergonomic adjustability not live, the gain knob is difficult to turn).
As against a big BMOL: I have two guitars both active electronics which means a very powerful signal, and when I want to enjoy the full dynamics of the signal I saturate the transmitter. I am therefore obliged to lower the gain of the transmitter and a signal so I much more feeble than a good old cable (if I go up the gain of the recetteur I saturate it for several seconds before the signal the guitar does not mean a s'attnue and listening).
In addition it adds a bit of breath and my food a little momentum (its very slightly comprss.

I think this material conviend well on stage (no more s'enmerde with cables that make boondoggles with those of friends) and use a guitar with which the signal is not too powerful (micro single or at least without active electronics).
The door of the transmitter is huge (makes for more th 100 meters). I tried to play in the toilet while the amp is the living room and it works (but is a good little point we do not hear anything ....) o)

Equipment purchased in 2500 Fr, is a bit expensive, especially with inconveignents deficits above!
Having said that the stuff works okay, it still has an REU award when it was released (in 2003 I think)
See the source
Did you find this review helpful?yesno