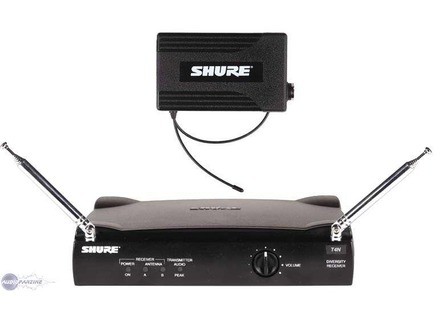 View other reviews for this product:
I use the wireless system for a year now and I must say that I am filled
I love that it is the autonomy of 17 hours with a standard 9-volt battery (alkaline anyway) but also the scope ... More or less one hundred meters under the conditions ... In addition, as is a system diversity (two antennas) he never answers (once a year ...) and the sound and perfectly rendered especially if you have a good jack RAPCO kind between the receiver and the amp. You can also thanks to the XLR plug the receiver into a mixing live but only if it does not use any other amp ...
Before this one I tried the model of Gibson at Samson j'aiami well as what was the size of the emitters. But I was disappointed because in the shop and I tried it stalled several times when I was two meters from the amp ... and the battery was new ... So even if the system is slightly larger Shure I preferred ...
Nine it is € 370 but I think that if you want to have his gear there must be a minimum ...
Finally with the experience I would do three times rather than the choice ...
See the source
Did you find this review helpful?yesno
Cookies help us improve performance, enhance user experience and deliver our services. By using our services, you agree to our use of cookies. Find out more.