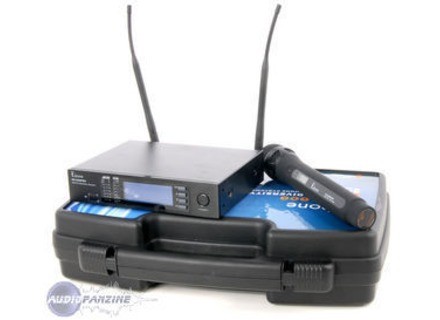 Q2Fun_Croco's review (This content has been automatically translated from French)

I received it yesterday and I tested it in rehearsal with my band.

I like a little less sound quality of the dish that requires playing with the equalizer to get the sound that is sought.
The dynamic is not bad and the microphone also has a very good resistance to feedback and there is no handling noise, which is pretty rare on a static for the state.

- Did you try many other models before getting this one?

The PWS1000 fared better than the SM58 without equalization, and also has a small "bump" in the medium. After adjustment, it is doing almost as well as the MB85, but still one notch below the static wire (MB78 Beta) which is really a special microphone for pretty voice ^ ^

- What is your opinion about the value for the price?

Excellent! A Static Multi HF frequencies with diversity for 160 €!

- Knowing what you know now, would you make the same choice?

I do not have enough experience to answer that question right now because I have not yet found "the" optimal setting.
I bought this mic a bit of spite ... Thomann why do we so not the same system with the capsule of MB85 Beta ??!??

I put 9 because at this price level, there is no competitor (condenser microphone).

Other The T.bone wireless systems