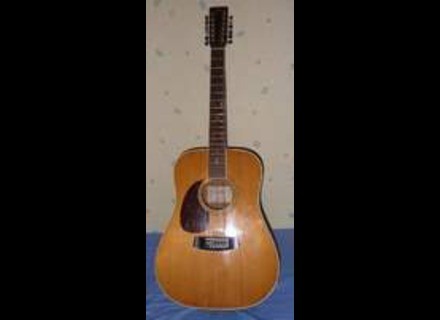 Aria 9214
3
I bought in a flea market for a mouth of bread, the poor silent covered with a layer of 3mm sticky dusts. I told him: Mechanical replaced the classic cons pair 35; the original Completely silent eats by temps.Elle has a `handle 20 frets ... not easy to accder Aiges.

The handle is in "D", not too big, pleasant and it does not crooked, nickel what! The body is fairly cons Balzer (12cm wide!) The head and quite heavy too. Basically it pluttpnible to play with standing. Its default is however a way to compensate for relatively good sonority is powerful.

I play folk, Celtic, metal etc. ... I grant 2-3 tons below it is very effective in the rhythmic solo but must also adapt (normal) music. I did not test many others but the sonority suits me very well: Bright, powerful but not aggressive.

I for 2 years, poor bte was in a state room when I rcupre. I quickly throw a look to see if it's critical organs silent touch. Freights under the muck taient still very good. Body not bad pets, but no cracks or major concerns. The truss rod works well, the handle has "too much" morfl. It is rather simple and nice if not its square head ^ ^. Apart from the reputation of Aria in the lower ranges of ages oversights I love it and it satisfies me