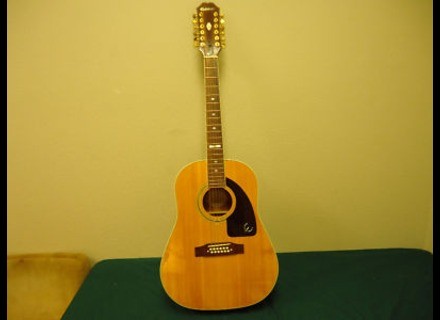 Epiphone AJ-1812
4
The Epiphone AJ-18S 12 is a 12 string acoustic guitar. I recently bought one of these used, and let me say for the price I've been extremely used. It's not an acoustic/electric instrument, which is no worry for me as I was mostly looking for something to write and record with and when and if I ever decided to gig with it, I can always just mic it up. I'm not 100% sure where the guitar was made, but it's definitely not the good old US of A.

The Epiphone AJ-18S 12 has a pretty good overall feel and is quite easy to play. It's fluid feeling, but when compared to higher end 12 string guitars, you'll notice the difference right away. Don't get me wrong, it's very easy to play and I've got no complaints for the price.

The sound of the Epiphone AJ-18S 12 is pretty bright overall, although I do have some pretty bright strings on it that is probably adding to this factor. I do like the way the guitar sounds both live and recorded as it seems to cut through well in both applications. Again, when compared to higher end 12 string guitars you're going to notice the difference, but as far as bang for your buck is concerned, the AJ-18S 12 sounds pretty darn good. It's definitely a recordable guitar!

Being that I only paid $100 US for a used Epiphone AJ-18S 12, I can't say a bad thing about it. It's worth a bit more than that and unless you're going to be spending a bunch more on a truly professional 12 string acoustic, this is one of the best deals you're going to find. Unfortunately there aren't many of these out there and if you are going to get one it's going to be used. It's still worth a look out if you're looking for an inexpensive 12 string acoustic guitar.