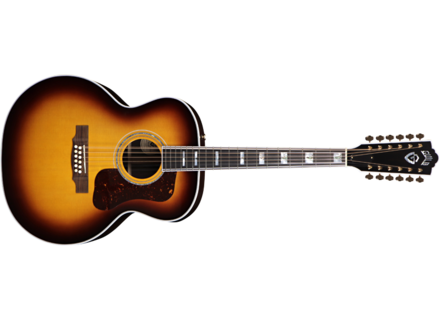 F-512, 12 String Guitar from Guild in the Traditional series.

All user reviews for the Guild F-512

Guild F-512
5
I haven't had the fortune of playing a lot of Guild instruments, but this guitar really stood out for me. This twelve string changed my opinions on twelve string guitars forever. It has more than 15 frets, but the 15-17 range is about when you can comfortably reach while playing. It has a jumbo size body. There aren't any pickups, this is a fully acoustic guitar. If

One of the most frustrating things for me when playing a twelve-string is getting used to the added pressure and the awkwardness of having to play extra strings. Some of the more technically advanced, frustrating parts were rendered almost impossible on lesser quality twelve-strings. I haven't had too much trouble playing this guitar at all. Sometimes I forget that I have to hold down two strings at once. It's a bit big in terms of width and length, so it might be a bit uncomfortable for some short-armed folks, but I have to admit that it hasn't been a problem for most of my friends who have also played this. It's an acoustic guitar, so getting a good sound is up to having a good pair of strings and a just having a good natural player's tone.

The sound of this thing is so beautiful it's scary. It's got a very full sound, that is, it has a great high end and low end. This guitar is definitely a good purchase for those who record, as it will sound good with almost any microphone. The sound seems to shimmer and shine, and it puts even some of the better Taylors I've played to shame. It stands out for me because it seems to be that anyone would really enjoy this sound, as it has almost a "best of both worlds" quality to it. Its simultaneously bright enough and dark enough for anyone.

This guitar is ridiculously good, and just as expensive. This is gonna be a long-term investment for the average musician, professional or amateur. This is to be expected, so its not a guitar for those who aren't seriously dedicated. I would say that its worth the price as much as any instrument could be. I can't find a single flaw with it, except for the limited uses that are typical of 12-string guitars in general.

<p class="MsoNormal">Playing the Guild F512 is a really fun thing to do, as the flow is like water.<span> </span>It has a really fluid feeling on the fingers, and is overall an easy instrument to play.<span> </span>I find that a lot of 12 string guitars aren’t all that easy to navigate through, but this is definitely not the case with the F512.<span> </span>The weight and size of the guitar is about average, as I don’t find it hard to hold or keep up.

<p class="MsoNormal">Without exaggerating, the sound of the Guild F512 is one of the prettiest that I have heard not only from a 12 string, but from any acoustic guitar in general.<span> </span>It is really the perfect 12 string to record with, as it has both a full bodied tone on the low end, and enough high end to make it sound silky.<span> </span>As I said earlier, not having a pick up isn’t a problem for me as the overall tone quality of the guitar more than makes up for not being able to plug it in.<span> </span>The F512 is definitely in the highest class of sound quality for acoustic guitars.