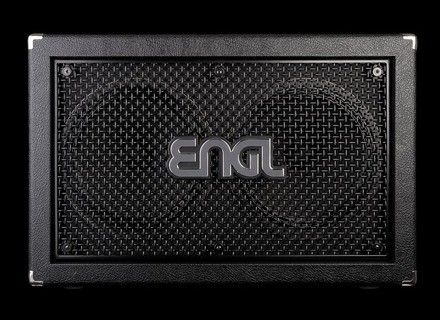 ENGL E212VH Pro Slanted 2x12 Cabinet
4
The Engl Vintage 2x12 is one of many 2x12 cabs I have owned. It's bulky and heavy but has 2 big handles on the side. I personally think that 1 handle on the top would be nice because it would be easier to carry. The build quality, as usual with Engl, is great. The tolex-job on mine wasn’t perfect but it was a prototype, you should have no issues with this on the production models.

The cab is loaded with Vintage30s and can be used mono or stereo. Mine was a sort of prototype so I'm not sure what ohmage the normal versions are. Check the Engl-site.

I owned this cab for a long time and I would say it is a good one for rock or heavier styles. It won't have the big punch of a 4x12 but it does sound big nonetheless. I think it works best for gain tones, it sounds ok for cleans too but it is really aimed at gain stuff. I used mine in combination with a Savage 120 or Savage SE and was playing in an alternative rockband and the combination worked well. I also found that the Engl 2x12 worked well when raised from the floor. I was using rack-fx at the time and would often place the cab on top of the rack and it would still have plenty of low end.

The Engl 2x12 is often overlooked but it really is a cool alternative in the field, it's build quality is very good and the tone is equally good. When buying a cab, you should really consider a 2x12, often a 4x12 will be overkill and for bigger gigs, your cab will be miked anyway and the microphone doesn’t know if it’s in front of a 2x12 or 4x12. Take your amp and listen to different cabs, the Engl 2x12 is definitely a good choice!
Did you find this review helpful?yesno
»

I got it yesterday, it was a moment that I was waiting for my old Marshall 1960A not satisfy me at all. In fact I keep ENGL 2x12 home (I still use the 1960 A repeats).
Awesome! I send my stereo rack (Marshall JMP1 + TECH 21 + Sansamp Rocktron X-Pressure + Peavey ClassC 50/50) in 2x16 ohms and it is clear that the sound is good ... Whatever addressed style, Precision is definitely there, the spacious sound, deep bass, crisp highs without being aggressive, warm mids ... nothing wrong for a 2x12, the bass is there, the sound sharp and I finally stopped bleeding ears (much less aggressive than my 1960A).
At ENGL it looks very solid air, Do not Mess With the cabinet: 29 kg the 2x12, it speaks volumes ...
Value for money ... Hey yeah the ENGL 2x12 is almost as expensive as a Marshall 1960A but unless you do the (VERY) big stages, the power supply is ample and in terms of sound reproduction .. . without comment. In addition to many heads are 100w, sent a 4x12 250 to 300watts is good but in a 2x12 130 watts is more punchy!
If the need arises maybe I'll invest in a 4x12 or 2x12 rather in a second for a good stereo image.
There is clear with ENGL I am satisfied with my purchase for a moment ...

I redid a test of my marshall 1960A and ENGL, it's been a while since I had not made the comparison with the two speakers side by side, same settings to the amp; there it is true that the name "marchmal" take its meaning! It comes mostly G12T75 that are actually very aggressive compared to the Vintage 30 ENGL 2x12 (I have owned a 1960AV mounted V30 so very good speaker but it seemed to share that little less punchy ENGL).
for fans of metal and big overdrive, do not take the term "less aggressive" as synonymous with a lack of power or fishing! Rather than G12T75 in overdrive (it's a bit less significant in the clear) project a noisy soup very messy, here or send a powerful V30 Surgical his (witness their presence in most of the speakers brands recognized by the metalheads: Mesa Boogie, Rivera, Bogner ...).
If one is a follower of his crappy unintelligible saturated in the high end casual punk way, G12T75 agree perfectly ...
Hallelujah ... Besides ENGL ENGL means "angel" in German right?
Did you find this review helpful?yesno
»

The finishes are very good, the Siberian wood is thick and sturdy, the front grille is beautiful, with the chrome logo! Really, look at, it throws A LOT!
This cab can play anything, even if the V30 is more oriented hard rock (depending on what branch he also, eh), but saw his unsheathed, it does not cause a scene balloche I think (without no ulterior motives for balloches!).

This was my first 2x12 cab and it filled me. He gave me a dynamic and a projection of his that I was missing before, but also accurate in all frequencies, whether clean or distortion.
I did not find the V30 as many gaudy feel.
For personal reasons, I had put in a vertical position to have the least sound in socks, and the difference was obvious.

I think the value for money is ok, but I've owned that NOS and ENGL 2x12 in, so hard to have a good judgment on that side.
I blame him for the lack of wheels still original! I think it's stupid, even if the do it yourself is for everyone and not especially expensive!

I kept it a year and then sold for NOS 2x12 Vertical.

thomazec's review (This content has been automatically translated from French)

I buy an engl savage head and the 2x12 cabinet I took the new horizontal (E212 L vintage) veiled reference to true, it does not even appear on the site.
Then all sounds great it was true that the head lamps are original I just replaced the V1 with an EI 12AX7 brand of Yugoslav origin which gives it a little more low-medium and cleans are quite wonderful and they are very well restitus by the cabinet for the Crunch and Lead is absolutely great. (I also had a prior MC2 is a good amp trs 50w lamps)
I plan to soon take another one but I wanted to try 2x12 1 2x12 brunetti, so if anyone has done the test!
weight is very reasonable it only 19 kg it can be in stereo it is mounted V30 and the guy is very strong, you can send calls over TIAG !!!!! not to move !!!!!!!
750 the price in general.
sin I had to buy a 2x12 I'd take it after it's a matter of money and taste but not all faile try because I have mags that shit around me.
Did you find this review helpful?yesno
»
Read the 8 user reviews on the ENGL E212VH Pro Slanted 2x12 Cabinet »