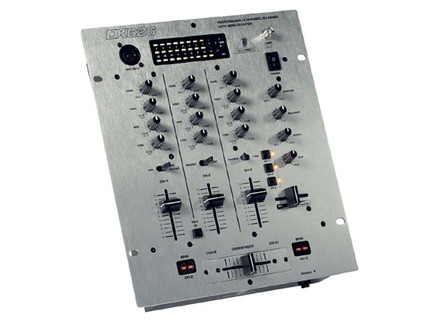 DX626, 3-Channel Mixer from Behringer in the Pro Mixer series.

View all offers for Behringer DX626 »

Behringer DX626
4
Pretty much standard features here, nothing over the top that would make this mixer unique or wanted solely for a single feature. However, the BPM counter is complete garbage and I wish there was a way to turn it off. I have to use ugly black electric tape to tape it off. As well, it would've been nice if there was a crossfader curve control as I do not like the curve of it. I like the split cueing feature so you can test your mix in your headphones and the lamp plug is great if you plan on spinning at dark events.

If you've used a mixer before, this shouldn't be too hard to figure out. Some features took a little longer to figure, but, within an hour, you'll have a firm grasp of how to use this mixer.

Overall, the sound quality of this mixer is pretty good. I do not have anything to compare it to, however, it is a Behringer, thus, there must be something out there that sounds better then this. I have had a problem though. There seems to be a low, electric like hum on the third channel when cueing it in the headphones. It only happens when cueing that channel, so, it isn't a problem with my turntable's grounding.

The quality of this mixer seems exceptional. It has a metal body, plastic knobs and plastic faders (not the inside, the part where you move). The crossfader is very smooth and feels like an optical fader. However, the internal wiring in the mixer makes a hum in the third channel on the right side when cueing in my headphones as mentioned at the starting of this review.

Overall, I enjoy this mixer. It's relatively easy to use and has great features. Very nice mixer for a beginner to get into DJ'ing and with a price like that, it is unbeaten. I recommend this mixer to a beginner or someone looking for a cost-effective yet decent quality mixer. However, I dislike the hum I get on the third channel when cueing.

Originally posted on FutureProducers.com
Posted by: [g-prime] ( 7-, 2004)
Did you find this review helpful?yesno
»

unseens's review (This content has been automatically translated from French)

Configuration is very simple, no problem. The manual is clear, no need to be a "pro" to understand the operation.

There is indeed a slight hiss when we begin to well up the volume. For equalizer mine has the walk 3-4 months since it's chaos !!

I possess for 2 years but I toured with a "stanton" for almost as long. This is the first model I tested, the price being the main highlight. My table loose me as ... I do not know what's going on (short circuit, ...) but the balance playing tricks on me when I turn up the volume of ca way comes that ca completely cut !!! Nice right mix !! ...
I am EXTREMELY disappointed by this table and Berhringer in general (my headphone as lach me after a few months).
With experience, it is clear that I do not have that choice. It is not expensive, but it's hiding something, do not be Leurer !!
Leaves add a few euros at the end, think twice.
Did you find this review helpful?yesno
»

McMaxX's review (This content has been automatically translated from French)

Behringer DX626
4
- Is it rackable?
Yes
- How many lanes, bus attendant, departures, returns ...)?
3-way (microphone and phono / line on channel 1 and phono and line on channels 2 and 3). 3 outputs: "master" and "booth" which can rgler level using knobs in facade and an output "tape" which can not rgler level and therefore rather Fate recording.
- What is the type of connectors (RCA, Jack, XLR ...)?
Everything is done in CAR set apart for the microphone that plugs into a facade XLR. Jack the front for headphones.
- Is the qualiseur paramtrique?
4 knob for each channel: gain and 3 qualiseurs you can descend and climb up to -32dB 12dB.
- The effects section is it integrates ...?
Not

- Is Gnrale setup simple?
Yes, there is hardly easier!
- The usual functions are they easily accessible?
Yes
- Is the manual is clear and sufficient? ...?
Yes, there are only a few pages, but as I said earlier, it's really a very simple mixer use!

- Is the Console transparent?
Not
- Introduced she breath?
I've never pushes the bottom but I Mount Adi my master knob until 3/4 and in any case means nothing! Advice when I even have a good amp for considering the price of the console, it is better now not to try to play too much with the red LED Meters
- Is the qualiseur effective ...?
It is right for the bass and treble for mediums I find -32 and +12 is a bit limited damage ..

- How long have you use it?
4 months
- What is the particular feature you like best and least?
I love this console in general, what I like least is that WARNING! : BPM counters are very slow to get updated (it may take a little turn a song that captures the trick ...) but especially the bpm counters and the crossfader are not assignable They are destined to channels 2 and 3, so no BPM or crossfader for channel 1!
- Have you tried many other models before acqurir?
No, a model of at JB System maisq ui was rather fate of studio work and PS-626 Pro at Gemini.
- How do you report qualitprix?
Very good, the price for a 3-way table!
- With the exprience, you do again this choice ...?
Yes, to start this is a really good small console! I'll spend another CHSE me but I mix at least 2 hours a day, I still have not had problems. But after two hours daily for 4 months, I've been around and I head to a CS-02 at Gemini.
Did you find this review helpful?yesno
»

Behringer DX626
1
3-channel mixer, with all that basic need, but without any effect.

The meter of the headphone that is useless because always in orange, same volume dye it.

The dual BPM counter does is absolutely nothing ... slow and far from prcis (when running) he pointed me hardteck was 80bpm ... and do not dpassent 160.

It is very simple to use!

With the experience we quickly realized that the knobs are really too close!

Then the big downside:

Least a fader will I loose after 6 months (return warranty) ...

Now with the experience I would buy this table.La no one with whom I mix also had problems on Berhinger (DJX700) .I therefore dconseille this table

Buy instead of Stanton Numark or equivalent in ...

And if you have the budget, buy pioneer, eclerc, Vestax, Rane or allen ...

Track 2 dfinitevement HS (on a shot of 2)

So I used my track 1 and 3 (non-assignable cross fader track, so cross that serves more)
Did you find this review helpful?yesno
»
Read the 14 user reviews on the Behringer DX626 »

Behringer DX626 manuals and other files