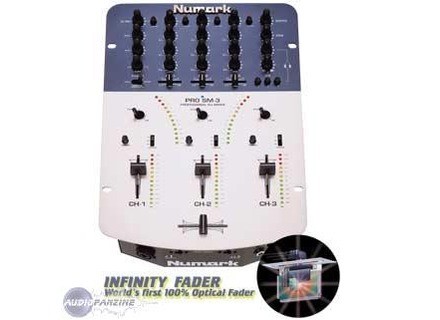 Numark Pro SM-3
4
It'll be 3 years since I started and have some weaknesses, but in my hands 3 years is really good !!

The atou this table has a simplicity of operation.

The sound is correct and INSRE effect is practical.

For me is a very sturdy table that easily evolve little I speak particularly cross that t much criticized but little easily be replaced by a PCV! (I'm accustomed to the flexibility and weight of the optics with time!)
The faders when they are really very strong.
Did you find this review helpful?yesno
»

chesta's review (This content has been automatically translated from French)

The SM3 is fairly easy to use No I have not read the manual ..
otherwise well-fader st spaces and even for pots
by doing a cross against the sound of crazy when you scratch and it tends to crash if you press too much (not even strong) if it slips much ms
regulation of the fader curve are not very effective

N the overall sound is not too bad a condition not too liters used with its
j in the headphone have the impression of having some kind of reverb
Always cross the ki and making noise by banging the table .. grrrr
eq's it going ms I m not serve with as much precision as for the techno so ...

It's been two months l ke I have, I have been able to test it with the big sound with a stereo down game or monitor speakers. J was a little disappointed she had the air so well.
ms c vraimment cross my ki disappointed
k it looks like they have not tried the before selling
before J had a ecler hak320 and technics pr shdj1200 tables correctly
j if I try hak 310 and 360 ... shock
k I think it is a little expensive for what emerges ki
I don not buy a sm3 a second time

djoystick's review (This content has been automatically translated from French)

Numark Pro SM-3
5
It's already all over di

Usage is fun for both the scratch for the mix, it is quite polivalente, we just mix all styles, for cons is true that the optical cross fader is super convenient, but when it Clak it makes a lot of noise , the annoying scratch

I used the last four months, before a j avai bst, really not great, then, I confess I am glad, I like many optical fader, good prices remain high, but hey I J had a very good arange that the fact that I have not had too much, otherwise it's sure I'll have no pa took this model
Did you find this review helpful?yesno
»

djsoundman's review (This content has been automatically translated from French)

Numark Pro SM-3
5
It possde everything a blender "scratch" must have. Small complment possible: a 4th channel, and a "punch" for the crossfader.

Trs-fast mixer, easy to CASC, everything is its place.

It is certain that the PRO-SM3 has a sound all his own color .. lacks transparency, its function a little .. Parcontre the eq and "cuts" are trs prcis and effective. It is possible to cut everything with the EQ, and without touching the frquence neighbor. Among the best "cuts" on the march

I-5 PRO SM3 home, on a 10eine of mixers including COMPTITE ADJ Rane Stanton and Allen & Heat, and it is really my prfr. All functions and places their functional trs. I have my first PRO-SM3 for nearly 5 years and have participated in many national championship with, some silent jealous!