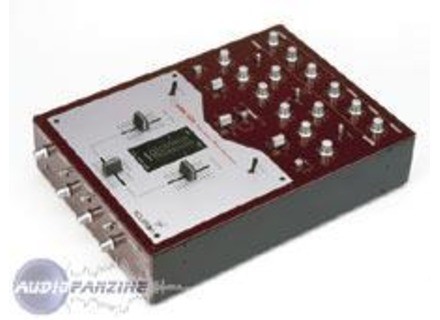 Ecler HAK 320
4
Totally satisfied, i have been mixing for over 17 years and have tried every brand out thoroughly. All mixers work, but i would say they are more like cars. They all get you to the same place, but some do it better than others. This mixer is an Aston Martin in the presence of Fords, but without the high price. You can keep all your brands made in the far east, this one is built in Spain (not known for build quality), but puts Vestax, Numark, Stanton and all the others to shame. Go Spain, you da man!

I gave this an 8, although there is nothing to lose marks on, 10/10 would be too pushy. I'll save higher scores for other mixers they bring out later on. The Hak 320 has the cleanest interface, with no obtructiuons whatsoever on the front panel, its a dream mixer.

I can only give this a ten, based on my previous Vestax mixer with an 8. The oversized intenal power supply makes this unit, and all of the rest of the Ecler line, sound cleaner, warmer and more punchy than all the other &quot;underpowered&quot; units out there. Closest to it: Rane. But I find them boring and plain. Again, it is like a car, I would rather have something that inspired me than the boring choice that is usually depended on by the masses.

They gacve me a 1 year warranty on my crossfader, no one can beat that. Also in JUly 02, they are bringhing out the HAK360, with a huge 5 year warranty on the crossfader, you can't get better than that. The tascam copies out there are buiolt by Ecler, but the Ecler branded units costs less and have better warranties. No brainer, just stick with Ecler! Also, House of Blues have just started to put them in thewir Hollywood and Las vegas venues, nuff said!

I love it to death, saving the highest marks for the new HAK360. The only other competition in this category comes from Vestax and Rane. As I mentioned: Rane=boring, vestax=expensive, Ecler=exciting/economical/better sound/not every one has them/fader warranties

Nicobox's review (This content has been automatically translated from French)

Ecler HAK 320
4
- The look is not brutal: square corners, steel plate screws in all directions. It looks like a huge brick! (Red-wine not give gniale with Pioneer!)

- Internal power is the table and requires a cable for power supply standard, a love.

- After 1 hour mix, you start getting used to his dimensiosn and its handling. Ca me change a lot of stick gemini 15cm wide I had before (EX-26). Everything is quite intuitive ...

- My big regret is common bcp a table: in preview, if the cursor is at the center of channels 1 and 2, there was a sound + low. So when you prepare the mix and you switch on the PGM was a marked increase in volume. It's a bit tiring.

- The crossfader: gnial. flexible prcis (after an adjustment of Butes). Cursor to the touch and pleasant area crossfader / fader is DGIG and not too smooth.

- The faders are identical to the cross in terms of touch but I do not like the management of their curve: Sharp mode, the cut is low on the scales (like 0 3) while on my pr cdente table, ca was done in Bute (7 10). It is very confusing but it should be possible to do so. I find it they are too "sharp"!

- Other settings (balance, EQ, preview, etc. ..) are simple, effective. Nothing to say!

- In the global sound is good, there is no shortage of potatoes, I find it prcis, I'm changing Gemini. (And the headphone output is very Ouissi by the way).

Overall, I am VERY, and I look forward to fully familiarize myself with this unit!
For cons, I have not understood the disassembly of the cross (fortunately, can be changed without removing the trimmer).
Did you find this review helpful?yesno
»

YoungDigga's review (This content has been automatically translated from French)

Ecler HAK 320
5
Good hip hop dj table, although today completely dethroned, it's my table and I love it
A little big, but the quality is there.
Otherwise we can not simple, two faders, a cross (interchangeable, practices when no what to buy!). The curves cross fader and are adjustable and can reverse all, very convenient.
I also like the 2 outputs, each with their master. 1 = Master XLR outputs, RCA Master 2 =

General configuration very simple.
The usual functions are very accessible, well spaced on the table, and I like especially the knobs bass / mid / treble horizontal. It's much better in the end.
The manual I did not at first, but I did not really need. I finally ended up asking Ecler recently sent to me via email when the product is no longer available even on their site. Very quick response from Ecler, very professional people, it feels right now. And now that I have, manual clear and sufficient.

Unfortunately with time, when you touch the knobs of earnings, his spit a little. But then she has 5 or 6 years, and I do not spare you!
Compared to the mix of tables that I see around me, for the same price that is almost dead in just three years, saw what I put in every day and scratch mix, I can really be happy with my choice!

It goes to 3 or 4 years that I have, I bought it but it came out of OCAS review when I had (jai been searching the store with his former owner).
As against small note on the home Ecler Service: If you send them a table, they go to the tester, and they change absolutely everything that is wrong. With them we can not predict in advance the bill, and AC can be salty, I had them there for € 200 from memory I think. But then you find your new one as titin.
This is my first table mix, before buying I mixais among friends on gemini or other brands of its kind, and there is no photo, I prefer mine
Value for money, really good, when you see longevity.
With the experience I probably would do the same choice, Ecler is a brand that I recomand eyes closed at qualitée material, a manufacturer very seriously.
Did you find this review helpful?yesno
»