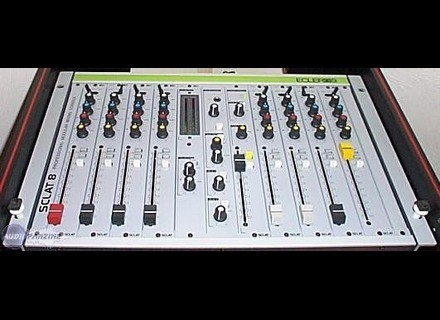 Comp's review (This content has been automatically translated from French)

Ecler Sclat 8 Diffusion/Production
5
It is Fully modular rack and we do what we want with.
8 slices for 14 input Stereo, two microphones and two mono symtrique dparts by auxiliary.
I know when even a radio station that uses it changes with 14 input modules!
RCA and XLR connectors.
2 correction tapes.
All you need in a width of 19 "inches.

Exellent sound quality.
Trs trs low of breath, curve rponse tract perfectly flat.
Suitable trs well diffusion for broadcast / radio / Tv-General for quality or use.
Nothing to do with discothque products on the market.

I use it since 1992 and absolutely nothing! Much better than consoles Freevox radio and power.
The only complaint is not having a button to bypass the tone controls and a few pots when rotating crachotent that use them. Anyway it's really not serious and this is the case most of the consoles, a dozen of rotation and it's over ...
The report qualitprix given the caratristiques trs is good, the sound is largely consoles as well as pro as soundcraf and others.
A model is rare on the market by the DJ MODEL (with fader to scratch ...) although sr.