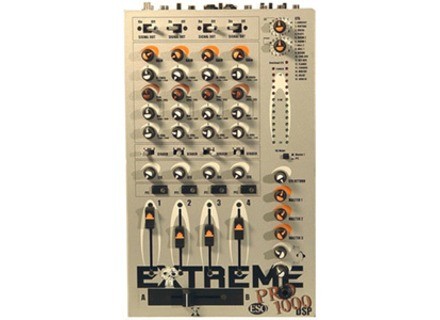 Eso Extreme PRO 1000
5
No rack. (At least originally)
4 channels.
Section Effes quality (especially since it's not as practical and push on the DJM600 for example).
2 headphones.
Eq semi paametrique the medium (ca and the fact it is rather rare on a console in this range!! Finally, I said it but I paid 800 Euros to the console's output).
looks pretty good!!

Manual french super clear (to note the effect is not necessary).

The biggest quality ctte console is the sound it delivers.
Really its the best console Italian brand, HOT !!!!! a touch of madness and a serious notement of the highest quality, heavy and powerful.

"Technics SH DJ1200" (I would say the worst of the comparison of all the coldest day and night with the grain and the grave of ESO, but it is not the purpose of the console, it is cut for the scratch Eso NO !!!!)

"Pioneer DJM 600" (More pattates, best effect, but again lost the gain of the heat and the crazy stuffs that are in the ESO)

Just for info I have all these consoles before buying the ESO, for what a sound!!

Connect your benefits arrive in a facade of ESO 2x 5KW and I can tell you it does! You never heard a serious as beautiful and powerful!!
As I speak against the deal but the rest is absolutely great also .....