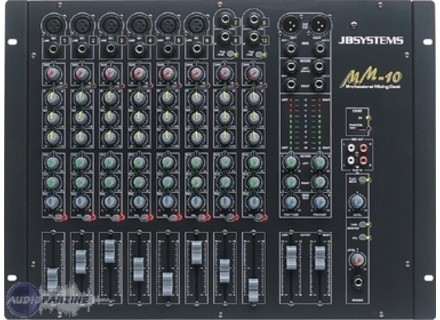 JB Systems MM 10
3
Economic console, one of the cheapest in the market for 6 mic / line inputs + 2 stereo inputs.

No control for lighting lamp gooseneck, and the power supply is too low to add one.

The PFL is not very practical because you have two buttons, one by the other general to allow the PFL instead of entering CINCH.

Manuel ultra simplified and virtually useless except for a beginner.

Console tansparente enough breath but relatively high on the preamps.

Normally, at this price, do not expect the moon.

EQ simple enough for a beginner.

Console bought 2 years ago as a console to plug an additional kit drum mics.
I plug the microphone seventh (bass drum) in a stereo line input and it works!

The pickups send a sufficient level to keep out the breath that does not bother me.

As against the breath can be annoying in traditional uses, especially in quiet passages.

A counselor only a sound engineer broke and beginner.
Did you find this review helpful?yesno
»

Kelo Sielmeth's review (This content has been automatically translated from French)" Mixer likeable but old ..."

JB Systems MM 10
5
It is normally expected to be 19 "rack mount, only here I've never been able to include it in my cabinet at 19", it is slightly too large, even by cutting it in my cabinet would not have ...

RCA connectors for output in playback and rec, Jack tracks and XLR inputs for mic and in the main output
It has 10 entries, but when we met the stereo, it makes 6 mono + 2 stereo so do not imagine being able to put 10 or 10 guitar synth, no, 6 instruments mono and 2 stereo.
3-band equalizers simple.

I put something like 3 minutes to understand its operation,
Afterwards, there are outputs and buttons which I've never used. (The PFL and Tape Monitors, I never understood their utilities, it would have been simpler SOLO and MUTE buttons) made in the FOR knobs so I've never understood, probably a level of output for the auxiliary output but I it's not quite see how I use the output recording ...)

Volume, pan, gain (although I think it is useless!), EQ, they are very simple and walk reasonably well.

The manual? What's that? I have not bought for me to read, it is not JRR Tolkien. It seems to have noticed in the trash one day ...

I always had a blast in my records, inaudible but if I pass on my guitar GuitarRig with distortions, so it amplifies the blast was heard ... I never had evidence that the blast came from the mixer, but I'm pretty sure.

Me, the EQ did not ask me that problems, I used the table to mix together a package of inputs into one output volumes with their tails and adjusted, I was told that the basic cost sonnorité has set the EQ to zero, that way they are put out, but I always felt that it decreased in the negative, so I always half in the middle. When I have a synth with sounds already finished that MUST NOT be retouched as my synthesizer YAMAHA MOTIF ROLAND RD or my piano, I avoid passing them on the table as I do not know how to put the EQ so that it does not change the sound ...

I use it for about 5 years I think (if not more, because I am on the date of purchase)

What I like most about this table is its simplicity, its good value for the 10 entries with a lot of parameters (but no effects)

What I like least is the EQ that I feel too rotten and always modifying the sound, we should have a button for the disabled, and then only increases an EQ, it saturates and it was fun LVL quibble of the runway, the gain of the track and the main stereo 2 LVL to make adjustments ... And I regret the absence of simple effects like reverb and another, and the lack of amplification, but that's what makes it was cheap (yes I put the past because I do no longer in the shop already when I bought it was the end).
I judge his great value for money, because compared to the tables now, for 10 channels you have to pay 300.
With experience, I would save to buy a 24 channel or 32 channels at 800 €
Did you find this review helpful?yesno
»