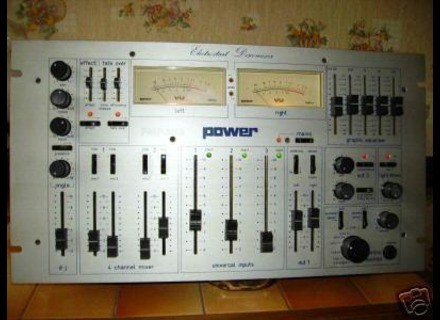 dj remy's review (This content has been automatically translated from French)" IT WAS ONE OF THE QUEENS OF 80'S!"

Power Acoustics PMP 403
4
The old, heavy but very nice mixer to those seen meters needle and was 19-inch rack, was one of the references among the mixers in clubs in the early 80s.

Equipped with knobs long race for the main lines, this sturdy table was equipped with an impressive (for the time) entries. She also had two stereo outputs (master one and two) and autostarts for turntables vinyls on the main knobs.

Simple configuration, normal function and clear manual. This finely crafted table, breathing (for the first series metal gray) strength.
POWER brand at that time referred to the quality already for the purchaser, an entry in the big names of the sound.
Numerous FM radio in the early 80s were equipped with gear broadcast POWER (803 tables and other models).

The late '80s was the swan song of high-end products of this brand.

The "403" was provided in front of an equalizer (five bands) and in those years, the tables that had an office were rare.

I bought when I started in the mobile disco in 1986 having worked with her in nightclub early 80s, I knew the quality of the product.
I kept a few years and I am separated mainly because of its weight and patches in the wrong place in favor of a 6001 CHESLEY equally well equipped, although thinner, lighter and equipped with all the patches on the front .

Besides its weight and price (not present), his biggest flaw was that the patches had each channel (sensitivity, bass, mid and high) were all on the back of the beast that in prohibited the use in the course of use.

poupouce94's review (This content has been automatically translated from French)

Power Acoustics PMP 403
5
Is rack?
yes
How many ways?
5
What is the type of connection (RCA Jack, XLR ...)?
RCA and
The parametric equalizer is it?
yes
An effects section is integrated?
Not

The console does not blow the equalizer works very well a very good audio quality!

These excellent mixer very easy to use with a common quality of gold still works after 30 years of use!

philrud's review (This content has been automatically translated from French)

Power Acoustics PMP 403
4
I had 7 prs of these tables: none sounded pareil.Elle has exeptional sound of PCHE and precision if it is in good tat.On does not sleep! It Unlike a soft sound
gras.3 universal channels mic / phono / line course.2 long fader channels: 4 mics / Stereo 2 lines, 1 DJ microphone channel with adjustable bass treble talk over, jingle with a way talkover.2
master outputs, a light output (transformer), an output rec, prcoute pfl hyper rotary power.
No gadget on this mix which ignores "the legends of the" 80s ". Aprisa, she turned
the "Memphis club" by the big sister exemple.Sa pmp803 she played the midnight-express
defense leads by as clbre FM radio host of the era and France.C 'the silent
good "stuff" ... Equalize 5 NGD + / - 15dB to finish.

Simplest is the handicap ...

No mieux.Transparente same breath? I would say "magic" when it is well rvise.
An equalizer as it is paradise in color.

Not cross the fader.Voir caractritiques dessus.Il it remains for me one of these tables, and I rcemment rcoute: I t tonn still that quality 'she possde.Mais I
BPS: Beware the RVision is not won ... These tables taient tudies to last 25
years, has 27.En minne fader out: not a single failure, magic, right?

- This console is a vintage model. Exceeds a technological point when compared to products Distribus today.
- In the era (80s) it was the Rolls Royce of discothque console! Remembering the good times passs all, I give the average ...

- Console easy to use.
- Rglage gain below the console ... Far from being very practical benefit.
- In the era, manueln in English.

- After + ers Premire DJ consoles, this was my Premire DJ mixer worthy of the name. I do not use more since ors + years (it is rather a relic today). I mix with the console for + or-10 years.
- The best of the era: Very strong, a reference in the clubs.
- The least: Rglage inaccessible gain benefits (under the console)
- I do not recommend this console to acquire today (except for an exhibition Old School!).

- Anyway, I do not regret this purchase this era ... 100% satisfaction for all those years spent

Did you find this review helpful?yesno
»
Read the 6 user reviews on the Power Acoustics PMP 403 »