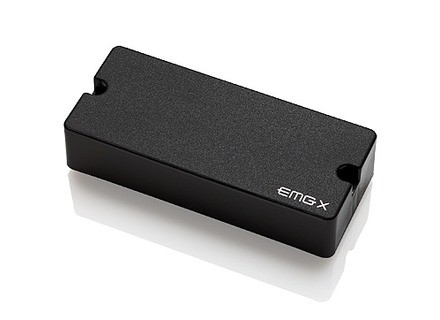 EMG 707X
4
EMG has developed a new line of pickups to help kick start a new era of active pickups. The 707X looks just like any other EMG seven string pickup, but it actually features a revised preamp that helps prevent some of the nasty clipping that used to occur in the older models.

The EMG 707 is probably the most well known active pickup for the 7 string world. It’s also notorious for making users route out their guitars if an EMG 7 string pickup was never installed beforehand. This pickup, unfortunately, does not fix that problem. However, it does fix some issues that other users have experienced. A recent thing lately has been running two batteries with EMG pickups to give them more headroom. This helps them sound more organic and less linear and compressed. The revised preamp basically takes the concept of running at 18 volts to a new level.

The EMG 707X still has that signature 707 tone going for it. It’s somewhat of a cross between an EMG 81 and an EMG 85. It has the thickness of the 85, but it also has that nice, aggressive attack of the 81. In fact, it almost has a somewhat single coil tone at times, but not in that nasty treble/loose way. The 707X with its revised preamp makes this pickup sound more open and more like a passive pickup. You lose that linearity with single note runs, but you gain some complexity with big, huge chords.

The EMG 707 works in any wood you throw at it, but I find that EMGs typically sound best when they’re in mahogany. Some people argue about EMGs having a signature tone that takes over the guitar, and this is true to an extent, but wood still plays a very important factor. I’m not a huge fan of EMGs in basswood, but they can work with the correct EQ.

If you ever wished your 707 sounded more like a passive pickup, sounded less compressed and had some more complex overtones going on, you should check out the EMG 707X. If you wished the 707 was more aggressive, check out the 81-7 or 81-7X instead.
Did you find this review helpful?yesno
»