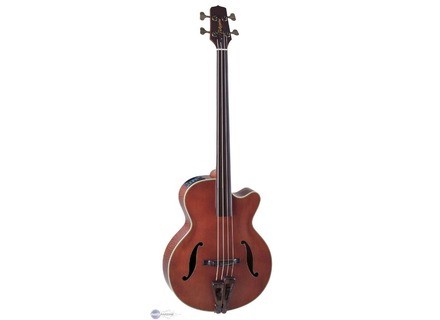 Takamine B10
5
Playing in small ensemble, no drums, and usually small venue as well, I can really hear my bass, so this baby is the ultimate. However, it's a pretty BIG baby. It's 34" 4-string and it barely fits in its crib, a hardshell cello case !

Unable to afford a new one, I got a mint used one for about half of the discount new price. I got it from the GC in Nashville ... so it's got a few good Nashville vibes in it !

This is the reall deal FL URB mimic of the bass "guitar" world. It's built like a violin family instrument, not like an acoustic geetar. About the only thing that is not 'fiddle famerly' is the lack of deep fiddle-like reverse curves to allow arco playing. The out line of the body is like a single-cut geetar so you can actually put it across your leg and play it horizontally.

On a strap, it hangs vertically. It comes with NO strap buttons, so I installed them to allow vertical on-strap playing. It also comes with a SERIOUS end pin for stand-up [not like the gibby-epi joke of an endpin].

The neck is like an URB neck scaled down to 34". It has the huge profile, tight radius, wide spacing, and high bridge of and URB so pizz-URB cadence and playing style are imposed. It has the long tail piece and true viola-style archtop build, so the it has the sound to complement the style.

The tail piece is more advanced than the traditional viola type. It's two parallel pieces of differing length [like a jazz guitar] but there is another feature adjusts the pressure the tailpiece bears onto the top of the body. It's NOT a true trapeze or viola style. The pivot is relocated so it's above the archtop and about 2" inward ["neckward"] from the rear [butt end] edge of the archtop. Anywayz, it's not just a pivoted tail piece ... it's also a lever. On eend has the string anchors and the other end bears on the body [via a brass plate]. The bearing pressure is adjustable and affects the tone and resonance. Verrrry cool.

It has a floating bridge, anchored only by string pressure. Therefore, there are no side markings on the neck. The headstock is kinfa 'Giant Gibson', IOW not a fiddle famerly scroll.

It has a piezo and Takamines top of the line solid state module with reverb, user presets, etc. It can be quickly and easily interchanged with their OTHER top line module, a tube driven thing, which is now standard on newer B10s.

Height adjuster wheels would be welcome on the bridge.

I replaced the tolex "bullet" case with a cello case, cuz the "bullet" case design just doesn't scale up to this size in a manner that is user friendly or lightweight.

The digital EQ-pre runs on two AA batteries that last about 10 hrs. Not expensive, but inconvenient, and the battery door is not attached. If you drop it and step on it, you are all done playing. I carry a spare which was "no-charge" from Takamine, so I guess they are aware of this.

Instead of a bass bar and sound post, it has two bass bars. Compared to a cello, the body is about 3" shallower and the neck joint is about 6" closer to the butt end, but the width is the same. Overall length of the whole ax is the same, cuz the scale is 4" longer. Quality is similar to any decent plywood URB, and the finish is more like a guitar, complete with binding. Bridge is much like any wooden archtop bridge, but huge. Bridge has not heght adjuster wheels, and the piezo is INSIDE it. It does have intonation compensated shape for the saddle area.

There is a removeable hatch on the rear in case you need to service anything inside.

The neck DOES have a truss rod.

This is an amazing ax. It is the furthest thing imaginable from a general purpose bass guitar, and even very dissimilar to any "acoustic bass guitar", but if you have a context in which to play it, it's quite versatile in its own way, and very closely challenges an URB at half the size.

It is the only 'production model' bass of its genre. The [2008] street price is about $3K. All others are luthier-built basses in the $5K to $10K range [google bill moll archtop bass]. TWIMC, it's built in Japan.

None of my minor complaints cast enuf shadow on the special qualities of this well made ax to deprive it of a '5' rating, which is not to say I'm comparing it to the luthier-built giant archtops. This is the only "factory" model, and it's built as well as any Martin geetar, plywood URB, or other top shelf, non-custom, acoustic stringed instrument. A '5' it truly is !

polykarpov's review (This content has been automatically translated from French)

Takamine B10
5
Made in Japan in the 80s, archtop design, 4 strings, ebony fingerboard, table and sides, maple neck with adjustable truss-road. Beautifully crafted and finished.

I use this instrument for years on stage and in studio with always the same pleasure.
On stage, only the line passed through a Schertler preamp. In a studio condenser microphone (see a couple XY) in addition to hearing.
The passage of the fretless electric instrument is without problems, left hand technique remains the same. It can play standing up (strapped), sat resting on the thigh or in the manner of a cello as a spike comes with. The pitch is slightly higher than that of a solid-body type JB and requires the installation of a particular type of string (extra long scale) that exists only in flat wood. Takamine also makes its own model for the string bass is great but it seems the price is well ... prohibitive: € 250!

The sound halfway between fretless bass and is a must: it is round, it sings, it asseoit terribly well in the bass. I use it primarily for acoustic repertoires but also in electronics.
The acoustic sound is quite low, not enough beef to play without amp.
The piezo sensor is a simple, connected to a basic preamp (bass, mid, high & volume).
Power is supplied by a 9V battery housed in the body and easily accessible by the inspection hatch on the back. I play cello with how the pike. There is a newer version than mine, with a more advanced preamp. I 've tried several and I much prefer the older, more rustic and "sings" a lot more.

Its strengths are in my opinion its unique timbre (very hot, very singing), the extreme generosity in the low end, the look and versatility. The main difficulty for me is to play it up with the pike (quite broken jaws) and transport. I paid 9500 F Used, good deal. If it again? Without hesitation.
Did you find this review helpful?yesno
»

Pagaie Cordée's review (This content has been automatically translated from French)

Takamine B10
4
Fretless bass with large Japanese-style handle bass, pike and a lamp with preamp
many settings available and tuner

Handle very pleasant
Good Access in acute
weight and shape are not conducive to imposing a classic position acoustic electric bass. For adjustable against the pike can be used standing or sitting like a bass like a cello (quite nice for the lazy like me rpetition!)

The sound is round trs, trs hot. The B10 rpond the slightest touch. Connect my bass amp, a Gallien Kruger is bluffing mostly playing trs prs of the handle. I RULES amp using the limit.

But we can also obtain more percussive sounds

I bought new in Paris in May 2008.
I had the opportunity to test it for several scenes including with big sound (CONFLUENCE MONTEREAU Festival).
The most enjoyable is the feedback of the musicians with whom I jou and without exception liked the sound.

If the violin is superb, two defects (thankfully minor):
- 1 The body style faux croco large Mexican guitar weighing the addition of the bass + pic would require almost use a hoist ...
- The two broken jaws cot (a glissementinopin for a solo is nothing rjouissantt) of the rubber tip of the spear.

I solved the first by using the soft case for long scale bass I had and I rsolu the second by replacing a chair leg tip provided a ball for pike bass (with a slight adaptation, it takes a little girl rod M6).

Trs happy with my purchase, I would recommend it without regret.