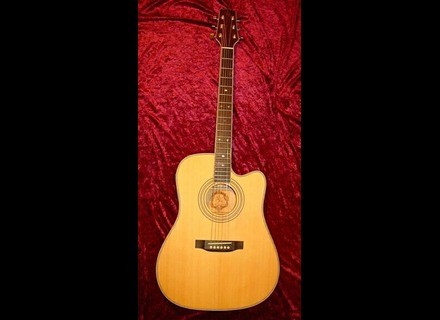 bloodsugar's review (This content has been automatically translated from French)

This is a guitar made in Korea.
MODEL 65 The CEQ is a right handed guitar, cutaway with spruce top and back clicks and Rabl. The neck is a darker wood (I'd say the Nato)

The finish is good plutt trs (believe it could be much more CHRE)
I tried this guitar in a store that was over promos (bought in the era 330 euros instead of 450) I immediately sduit t, although not knowing the brand. The guitar is well finished, lgre, and it sounds good acoustic. What more?

It's an acoustic guitar based Access in so acute is not hyper forcment ais (but thanks to the cutaway is when even better than on a sound Western MODEL)
Ergonomics is good plutt.
The guitar is lgre.

This, on both clicks and back stocky, sounds more crystalline, more mordern. Somewhat in the spirit Taylor.

Not that you will not get many beautiful rhythmic round, on the contrary ... but it excels in brightness, for chorus or arpges it ressortiera immediately in the mix or in the group among the instrumentals.

Electro acoustic part gives good results. The basic functionality is the volume, brightness, bass and treble. The preamp runs on 9V battery, a switch can mutate, another to test the battery. In short, what all good.
The electro sound acoutique has been tested on an HK Audio sound system, an amp and an amp AER domino Carlsbro Sherwood. In all three cases, has sounded good (with preferences for all of the same EAR, what precision these amps by the way)

I bought it in 2001. She has also aged well.
I was looking for a versatile guitar era, not too expensive, with modern sound plutt. It's this one I bought

- I like her current sound, bright and crystalline.
- I like its look (binding, saddle back and clicks, it is unusual)

It is not as full-sr level as its taylor, martin and other gibson, but it's not the same price either, we must compare like with like.

The report price is good quality. Namely, for 330 euros the era, it was worth the money (the guitar has aged well and sounds)

I would do so srement this choice.