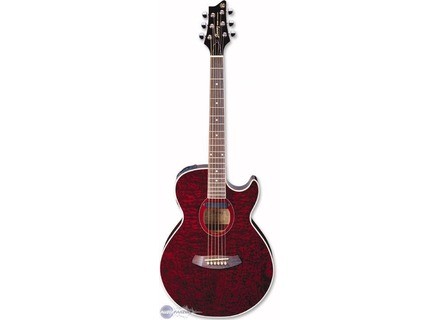 SX72, Acoustic-electric Folk/Western guitar from Ibanez in the Masa series.

Ibanez SX72
4
Large auditorium acoustic guitar pan hybrid coupe, compact and with a fishman piezo and magnetic pickup.
Preamp handy, 3-band EQ, phase switch, volume and a mixer for assaying the level of magnetic microphone and piezo with the ability to mix the two.
Quilted ash body (love it or hate it, at least it does not leave anyone indifferent), mahogany neck and rosewood fingerboard. Ash gives this guitar a sound that stands out and unusual acoustic robustness.
A fast soft V neck, reminiscent more than some modern dishes that SG Ibanez sleeves, I&#39;ve never seen stick as thin and fast on an acoustic, you&#39;d play on a electric, optimal playing comfort over its entire length.
Rather original features, which had seduced me at the time.
The manufacturing quality is at the rendezvous, impeccable finishes, varnish is thin which is welcome an acoustic point of view but is a little less for its durability. The table is not massive as it may already be in this price range, but the use of "alternative" timber and a powerful electronic guitar, make this anything but enhance your campfires, to see if it&#39;s just a marketing ploy or a true technological breakthrough ...

The handle is a treat, a flawless ergonomics, the action is low and to mount the strings a bit steep.
Like an Ovation, the choice of wood, electronics and reduced body size makes it an ideal candidate for amplification. It makes you well once connected that silk electro-acoustic or electric. It is resistant to feedback unlike traditional electro-acoustic.
Can actually play in an amp, go through the fuzz and whatnot without problems. I had purchased to follow the example of Jay Mascis can not help but use fuzz in his acoustic shows, I was overwhelmed. Special mention for modulation effects appear even when the dimension piezo and magnetic one mix.

Mediums do not shirk, the highs are bright but not aggressive, the bass is accurate (which is rarely the case for the majority of electroacoustic this price), it has a lot of presence and can easily make it sound like a half box pushing a little mediums. One can find sounds closest traditional dreadnought by digging. Playing exclusively on the neck pickup, magnetic, can make it sound very round and jazz, as an archtop.
Price of fame, the "physics" of this guitar gives it a lower projection compared to a dreadnought.
Which is an advantage when you do home studio apartment and we not want to disturb, and is immediately less if you want to play acoustic with a nag that plays a big dreadnought. Moreover, if the big nag plays lead and rhythm you, thank you good and mix well.
However, the ease of the handle to mount much thicker strings without detriment to your game, which overcomes this problem of volume.
Moreover the very balanced and flattering her that he is connected is there, if you like the sound of Ovation small or large auditorium guitars (yes you who love strummer joyfully open chords and use capos is I&#39;m talking to you!) you will be served.
That&#39;s brilliant, accurate and balanced lens. The bass is tight and smooth highs. The table does not shirk. She obviously did not scale and complexity of a Martin, but unlike many guitars its price range, it deserves to stay accurate and pleasing to the ear even when attacked mercilessly , which obviously serves its sound once connected, you can not have everything!

I bought it in 2009, a month or two before they stop production. I my bearings to a small Ovation, but these sounded much more "dry" and less metallic than projected here.
I had tried many other guitars Jumbo and Grand auditorium in this price range (between 350 and 400 euros) before I decide, more roots to more bristling with technology and this one (although bristling with technology without) a won my vote.
She stood out with its magnetic micro and use of ash on an acoustic seems also bold, here come my way to the robustness of the amplification fiber composite body in Ovation, and fast attack all mahogany guitars.
The sound of this guitar is balanced (for home studio, it&#39;s plug and play, the post production limit is already made) without metal or stifled like many guitars in this price range. I think of the entry level which for me were clearly below and quite stiff to play in addition Takamine.
I liked the Lag red cedar and Cort a little more upscale, more recently I found the Seagull Sigma and not bad, but none of them would have an equivalent for the electronic same price.
I was not crazy about her face, but as soon as we tested it plugged into a hot rod deluxe with my friend we did not hesitate, it was good, sellers store - from oldies in addition - by not returning at all. Not to mention the ease of playing, which is ridiculously good for folk. I almost forgot to beef up my fingers as I had bought a little to improve my accuracy on power.

It could obviously be "bulky" and have a less compressed acoustic sound. The use of ash is certainly something, its table is also extremely rigid, but insofar as it serves its robustness and power for the price I think there&#39;s not quibble.
I particularly recommend to those who love crystal clear sound and a large auditorium that need a solid output jack of their electro-acoustic sound, this guitar is unwavering ally of a project or home studio one who wants to play a sound into an electrical training.
However, if you intend to play mostly acoustic, especially in groups (I&#39;m talking to you hippie playing outside with a friend percussionist nag), choose a guitar that projects more than one.

Qill's review (This content has been automatically translated from French)

Ibanez SX72
3
Made in China
For the specs says it all, I would add that the body of the blade is not as fine rather than Ibanez or Washburn EA22 Euphoria Nuno, because here for once it is all in the same price range
To me this scratch caters to everyone looking for a large auditorium type sound with a good face at a reasonable price

I was looking for a nice round sound with a handle similar to a power why it is top
Access to acute 15-16th until the box is practicable after a shredder folk is not my delirium
Rather slight scratches which is a plus for transport
Comfortable ergonomics plays his little jig a lot
Much like the agreement
The string action is pretty good
I'm hard on it to play Midnight Express Nuno's father, with my sister Ibanez AEL is steeper

So I like my vacuum, sound is warm with a small electric sound
The volume despite its small body, bah my neighbors hear it (at least they listen to good zik, p)
I have no acoustic amp so I never have tested the full price, damage

For me it was the surprise I was not expecting it by testing it in the store I found it sounded better than Ovation Lag and I had tested before
My criteria were a stick close to an electrical and a grand auditorium body between € 400-350
Since that was sold to scratch I stayed true to Ibanez since I took a EP10 Euphoria
If it again, bah there I started to rest on mixed folk I think it's nice it's a good scratching the price / quality ratio is suitable for 300-250 € on occasion it may well do so, after it is not a scratch of madness that keeps us from sleeping so we want to caress the evening, P
it's still okay for a skyscraper price
Did you find this review helpful?yesno
»

mrlarry's review (This content has been automatically translated from French)

Guitar equipped with two microphones: one under the bridge and one at the handle (magnetic pickup very good for live). this guitar is a joy in acoustics (sound good and fun to play), and a marvel in electro acoustics. Super's (very good bass and treble foil).

Electronic side, the sensor must Fischman and a magnetic pickup which gives a side handle of his power (half body style). All controlled by a preamp equalizer AEQ 3 MX balance setting between the sensor piezo and magnetic pickup! (A great range of sound of the slamming electro-acoustic and full of harmonics in the electric hot).

I've had six months, I've tried others (there were only choose from the store) but it's the same price after.
I liked her, I took it.
I am not unhappy.
Did you find this review helpful?yesno
»