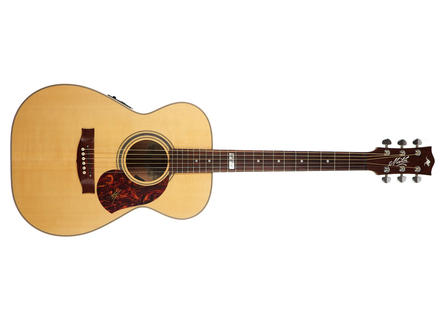 All user reviews for the Maton EBG808TE

Average Score:5.0( 5/5 based on 6 reviews )
Value For Money : Excellent
Not satisfied with those reviews?
Our members also liked:

I replaced the original graphite nuts and the plastic pins with bone parts. It doesn't change the sound dramatically but it's more worthy of such a high-quality guitar.

Except for the CGP inlay of the fingerboard, it's not a flashy guitar. No golden parts, no abalone overdose.

It's equipped with an excellent Maton APmic preamp and 2 pickups (bridge + body).

No cutaway but that doesn't bother me.

It's ideal for finger picking. Tommy fans won't be disappointed.

The guitar provides a larger sound range when plugged thanks to the multiple settings and the pickup combinations. This guitar deserves a good amp (I play a Schertler David).

Excellent value for money (my luthier liked the wood and the sound very much).

The guitar needs a few enhancements (nuts and pins) and a good adjustment (the original action was very high).

Like most guitars, two models won't necessarily have the same sound. I was lucky to be able to test two of them at the store. Test it first, if you can, and also the Artist model which is made of a different wood.

As a summary, if you like Tommy Emmanuel's sound this guitar is for you (even if you can't play like Tommy). Although the unplugged sound is not very loud, the sound is remarkable in the mid and high frequency ranges. The guitar is amazing when plugged to an amp.
Did you find this review helpful?yesno

It is a small guitar with a huge sound and amazing looks. To begin with, the finish it amazing. Very light satin finish creates an ultra smooth neck that allows the fingers to practically float along the neck. Exotic Australian woods are also a plus for looks. It kind of shimmers in the right light. Pickup is Maton's own AP5 which came installed in the guitar. Sounds better than an Martin or Taylor I have ever played plugged in. Action is perfect as is fret spacing.

Can't think of anything I don't like about it. It didn't come with a case so I bought a really nice classical case that fits it perfectly. Maybe the logo on the head could be a little more fancy. It is just a white lettered inlay of the Maton name. This just goes along with the simple beauty of the gutiar I guess.

Construction is flawless. The only thing I noticed was when I peeled off the pickguard plastic, the pickguard peeled up slightly in one corner. Has not moved since and is not a flaw in my book. Very sturdy and is definitely a workhorse. I am super careful with it but I bet it could take quite a beating.

Very, very great guitar. Very cool looking. Superior sound to any other guitar oout there. I will put it up against any Martin or Taylor you can find. Definitely a must buy if you can afford it. Not a well known company, but worth the trouble of finding one.

Claudeze's review (This content has been automatically translated from French)" The original ..."

Maton EBG808TE
5
Say again what has been said, I would like some clarification on this guitar I have.
This guitar is imported into France by four official distributors (see site Maton) and the price is currently the cheapest in Europe in France.
For the moment, because this guitar just change this summer (I wrote to Maton): it is only cosmetic, but the head is now adorned with the logo in maton pearl insert, plus an insert kangaroo . The table now has a yellowish tint (like the new 2012 TE).
For violin, there are quirks for this award: full polish (the handle is not treated separately from the body). Head with very low inclination and heel reported (less wood). Varnish handle not very fast, a bit "sticky", but it is polished with the game

The handle is nice, but I've seen better profile and finesse (I mostly seen worse). Varnish not very slippery. Form, contrary to what is often said, is not an OM (Orchestra Model, thus derived ratings Martin). It is a mix between a dread and OM. The size is that of OM, the thickness of this dread. the form of a mix 2.A rather unique. Quite light.
Quality spruce table is remarkable, very fine satin varnish (a good point).
"Maple" Queensland has nothing in common with maple, mahogany is a pseudo (he was also supposed to replace locally). It is very close to the African mahogany in appearance and sound very similar to mahogany in general. Despite the depth of box, no excessive bass, beautiful mids and an average volume. Mine is set rather low origin to the point that a lot of notes curl around into play supported (this is not a problem and inaudible finger and electro) Can not drop the nut flush is already daisies.

At first, it looks like a sound trivial, then after a few minutes, one tames the guitar and there is another matter. You get what you want from it but we need to get it. Subtlety and nuance, balance. No "loudness" as rosewood. This is really a guitar part.
Once connected, it is the absolute slap. No other sound is connected has given me such pleasure: no need to tamper hours the amp settings and guitar preamp, it sounds incredibly well. the addition of micro color box gives superb acoustic and achieves percussive stunning quality (I have other guitars with dual microphone, but nothing to do, in general it is better to cut completely micro box to not ring pan and percussion blah ...)
Very little feedback, even with the microphone open box.
I had a mic cables concerns that affected the cash internally and vibrated at certain frequencies. A little tinkering in the rosette and it's done. I think putting small pieces of foam around the place cables to be quiet.

An original guitar, versatile character but worth a little effort (only sound). Connected, the fun is endless.
I have a lot of guitars (mostly format OM) Martin, Furch, Taylor ... All are easier to play, offering a pleasant sound faster but all are quickly overcome as they fit in, and sometimes become tedious .
The warder, no.

james512's review (This content has been automatically translated from French)

The handle and super enjoyable! The sound is beautiful!

masterpro007's review (This content has been automatically translated from French)

Maton EBG808TE
5
Made in Australia very rare in France, no distributor! In electro it's crazy as it sounds, often heard that!

It slides alone! too good!

Folly, better than a big Martin, frankly, it's amazing!

Maton EBG808TE
5
Made in Australia
21 fret (junction box to the 14th)
body type such as bluegrass, 000 martin small enough so
APmic amplification developed by Maton with two microphones: one on the bridge and the rose window.
settings: bass, treble, master volume, mic volume 1, volume 2 mic
the handle is very thin and very low action (I had never seen it)

The neck is just incredible. impressive playing comfort, she plays by herself, just to let it go

I play a lot of music close to the blues, Irish and folk ... So it is fabulous!
I mainly use the side and I do not sound amplifies as for large rooms with DI (donations without amp).
the double micro provides amplified sound extremely close to the acoustic sound but with more bass present.
the acoustic sound is pretty lens (nothing to do with the traditional dreadnoughts) with an insane sustain.
it sounds as good in gypsy styles (one solo with a pick can easily sound like a Selmer type) and jazz (including accompaniments in agreements where we can give it a name very soft) and of course the blues and music family, then it can go from its very roots, hoarse and slamming in a round and warm. play finger has a range of nuance insane.

I use it for almost 3 years and I'm still a fan, I keep discovering new ways to play and its top ... it's happiness!